Note to Readers: We have been experiencing some glitches in the system as relates both to our recording of the Daily Text and the email distribution apparatus. We are working to get it fixed. In the meantime, please know you can always read the daily text at seedbed.com/dailytext in the event you do not receive it in your inbox. Thank you for bearing with us.

48 He replied to him, “Who is my mother, and who are my brothers?” 49 Pointing to his disciples, he said, “Here are my mother and my brothers. 50 For whoever does the will of my Father in heaven is my brother and sister and mother.”

There’s nothing and no-one like family. Anyone who has ever moved away from their extended family knows this profoundly.

I think today’s text gets easily misunderstood as a kind of diminishing of one’s family of origin in preference to the family of God. I don’t see it. Clearly, Jesus is asking for a radical reorientation of our priorities. In fact, he asks us to cease with priorities altogether and to give complete focus to a singular priority which is the cultivation of the kind of righteousness revealed in his character and the undivided pursuit of the kingdom of God. He promises if we can get our lives properly centered and oriented around this singular priority that he will bring everything else into an alignment we could never have found ourselves. Remember his word from the Sermon on the Mount: “Seek first the kingdom of God and his righteousness and all these things will be added to you.” Matthew 6:33.

It’s interesting to note Jesus speaks this word about family, not to his family, but to the crowd of disciples who were listening. His family was outside. Jesus was making a point to the disciples. Because of their allegiance to him and his kingdom he was letting them know he considered them not “like” but “as” family.

Jesus is not so much distancing himself from his family of origin as he is enlarging it. He does not intend to create another order or organization that is somehow over against the order and institution of family. He’s saying, in effect, all the goods we associate with good family are present in his community. It’s just that you don’t have to be related by blood to be included in on such goods and benefits.

Jesus does not ask people to leave their family in order to follow him; though sometimes the consequence is one’s family will leave them. In fact, Jesus wants us to bring our families with us on the journey of following him.

You’ve heard the saying, “Blood is thicker than water.” It is commonly assumed to mean that family relationships are stronger than friendship ties. That’s not what it means. It originally referred to the bonds formed on the battle field between soldiers who often shed blood on behalf of one another. It meant the relationships forged in a blood covenant of sorts were stronger than that of brothers who came from the water of the same womb.

Jesus takes it to another level. He established the New Covenant by his own blood which creates the eternal unbreakable bond of the family of God. Blood is indeed thicker than water—far beyond what any of us can imagine. And then to take it a step further there is the water of baptism, through which we mark the “new birth” into the family of God. 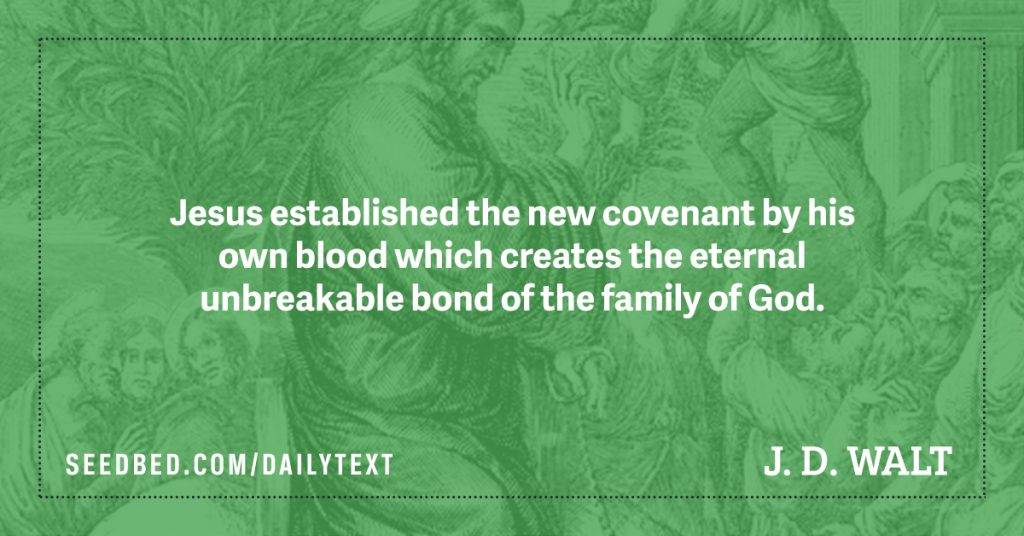 1. Have you ever felt like or been led to believe that the church was more important than one’s family of origin or that it should be? Do you see how this can often be a false choice?

2. When and where have you witnessed (or practiced) the people of the church caring for and being there for one another in ways on par with (or even exceeding) the way families are there for each other.

3. Are you, or have you been motivated to help bring your family of origin into the blood bonds and water baptism of the family of Jesus?