It's Not About Me, But We - Seedbed
close
Menu 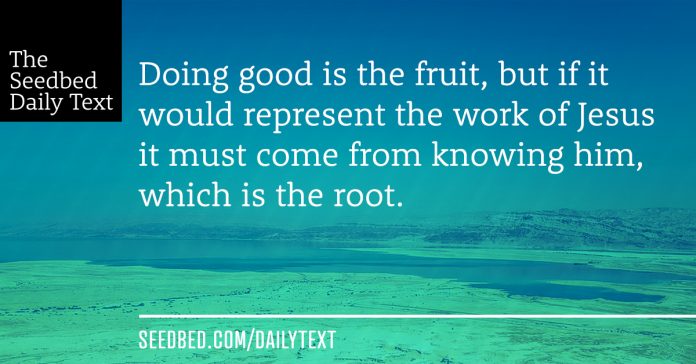 “Just what I have been telling you from the beginning,” Jesus replied. “I have much to say in judgment of you. But he who sent me is trustworthy, and what I have heard from him I tell the world.”

They did not understand that he was telling them about his Father. So Jesus said, “When you have lifted up the Son of Man, then you will know that I am he and that I do nothing on my own but speak just what the Father has taught me. The one who sent me is with me; he has not left me alone, for I always do what pleases him.” Even as he spoke, many believed in him.

Today’s text begins with the question of all questions: “Who are you?”

Here’s what I find most interesting about the way Jesus answers. He tells them about his Father. To answer the question about who he is he tells us about someone else, Abba Father. Even more so, he tells us about their relationship. It’s like he’s saying, “I am not merely who I am. Rather, I am who we are. It’s not about me but about we.” In fact, later he will be so explicit as to say something like, “If you have seen me you have seen him.” Because we know Jesus, we know the Father. Take it a step further, he will soon say we cannot know the Father except by knowing Jesus.

This same dynamic of knowing the Father by knowing Jesus is the very same dynamic he wants to work through us. What if someone asks me, “Who are you?” What if in order to really know who I am they needed to know who Jesus is? What if I were so filled with such an inexplicable love that my life made no sense apart from Jesus? That’s my understanding of what a saint (a holy one) is—someone whose ordinary life is so filled with an extraordinary love that to talk about them would require talking about Jesus.

This is what discipleship to Jesus is all about, not tirelessly running around trying to do good things for God, but becoming an actual authorized representative (an ambassador) of Jesus to the world. Sure, this involves doing good, but far more it means walking in an abiding relationship with Jesus such that we do what he is doing and say what he saying. Doing good is the fruit, but if it would represent the work of Jesus it must come knowing him, which is the root. Otherwise it might as well be the United Way—a great organization mind you, but not the church Jesus is building.

He’s praying this for us, such that we might say with integrity, “The only way to know me is to know we.”

I think this is precisely what Jesus is praying for in his prayer recorded in John 17—for me to become we. “My prayer . . . [is] that all of them would be one, Father, just as you are in me and I am in you. May they also be in us so that the world may believe that you have sent me” (John 17:20-21).

Abba Father, we thank you for your Son, Jesus, and for making yourself known to us through him. Grant us the grace of relationships with other people that increasingly resemble the nature of your relationship with your Son. We pray in his name, amen.

1. Upon being asked, “Who are you?” why does Jesus tell us about his Father?