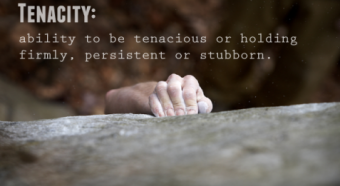 I have been reading Jeremiah over the past couple of weeks – not an easy read in many ways – but certainly for me a thought-provoking one. Something struck me while reading: the recurrence of a word which also reminded me of a chapter in a book by Eugene Peterson. After a great deal of rooting around in boxes in the garage, I found Eugene Peterson’s little book of reflections on Jeremiah called The Quest for Life at Its Best. In this wonderful wee tome Peterson talks about this word which had struck me so forcefully. It’s the word persistently.

“For twenty-three years, from the thirteenth year of Josiah the son of Amon, king of Judah, to this day, the word of the LORD has come to me, and I have spoken persistently to you, but you have not listened.” Jeremiah 25:3

With those words Jeremiah describes his ministry as a prophet to the people of God. It’s been 23 years ….“persistently.”

For 23 years he met with God and listened to God and then shared God’s message with God’s people. If you know anything about Jeremiah you’ll know that it wasn’t 23 years of unmitigated success – anything but. Much of the time he was ridiculed, abused and imprisoned. Yet day after day, week after week, month after month, year after year, and decade after decade, Jeremiah persistently did what God had called him to do. He didn’t give up, he didn’t move to a city where people were more responsive, he didn’t modify his message. He persistently carried on doing what God had called on him to do. Peterson remarks, “the mark of certain kind of genius is the ability and energy to keep returning to the same task relentlessly, imaginatively, curiously, for a life time. To never give up and go on to something else; never get distracted and be diverted into something else”

I have been thinking a lot about Jeremiah and his persistency the last couple of days. It’s reminded me that what God calls us to do often calls for something we don’t regard as very glamorous; it’s what I would call holy tenacity.

Peterson defines it as the ability to return to our God-given calling “relentlessly, imaginatively, curiously, for a life time. To never give up and go on to something else; never get distracted and be diverted into somet

hing else.” I have to be honest and say holy tenacity doesn’t come easy to me. I belong to the Pot Noodle* generation, where we expect instant results. The stories we tend to celebrate in church life are the leaders and churches who achieve success quickly – 500 new people in five years impresses us. It probably should too. We should celebrate God’s blessings. However, we seldom celebrate those who minister “twenty three years…persistently,” who, like Jeremiah, approach what God has called them to do with a holy tenacity over an extended period.

What we are talking about here is more than dogged determination and drudgery. Peterson comments, “don’t feel sorry for Jeremiah. He was not stuck in a rut, he was committed to a purpose. Jeremiah shows no evidence of bored drudgery. Everything we know of him shows that after 23 years his imagination is even more alive and his spirit even more resilient than it was in his youth. He wasn’t putting in his time. Every day was a new adventure of living the prophetic life. The days added up to a life of incredible tenacity, of amazing stamina.” Those words excite and inspire me; that’s the kind of holy tenacity I want to develop. I want to be more alive, more imaginative, more resilient as I grow older and I serve longer in my calling. Which made we wonder, how was Jeremiah able to develop and sustain this holy tenacity?

A read-through of the book of Jeremiah soon reveals the source of Jeremiah’s holy tenacity. Just look at these verses.

Jeremiah 7:13: “And now, because you have done all these things, declares the LORD, and when I spoke to you persistently you did not listen, and when I called you, you did not answer…”

Jeremiah 7:25: “From the day that your fathers came out of the land of Egypt to this day, I have persistently sent all my servants the prophets to them, day after day.”

Jeremiah 11:7: “For I solemnly warned your fathers when I brought them up out of the land of Egypt, warning them persistently, even to this day, saying, Obey my voice.”

Jeremiah 32:33: “They have turned to me their back and not their face. And though I have taught them persistently, they have not listened to receive instruction.”

Jeremiah 35:14: “The command that Jonadab the son of Rechab gave to his sons, to drink no wine, has been kept, and they drink none to this day, for they have obeyed their father’s command. I have spoken to you persistently, but you have not listened to me.”

Jeremiah 35:15: “I have sent to you all my servants the prophets, sending them persistently, saying, ‘Turn now every one of you from his evil way, and amend your deeds.'”

Jeremiah 44:4: “Yet I persistently sent to you all my servants the prophets, saying, ‘Oh, do not do this abomination that I hate!'”

I think I am beginning to understand how holy tenacity is developed now. Its not an end in itself; rather, it’s the overflow of our relationship with God. Jeremiah had holy tenacity because he was so close to God that his life reflected God’s character. I should have known that holy tenacity wouldn’t come easily or instantly.

After all my reflection I have come to the conclusion that just like Jeremiah I, and you too, will only develop this holy tenacity which is so vital to our callings by spending time with and listening to the God who is tenacious in his love and mission to all of humanity and to us as individuals. Jeremiah says that during the 23 years he ministered persistently, the word of the Lord came to him. In other words, he persistently spent time in God’s presence, listening to God’s Word. I can draw only one conclusion: a lifetime of holy tenacity ministering for God will take a lifetime of holy tenacity being with and listening to God.