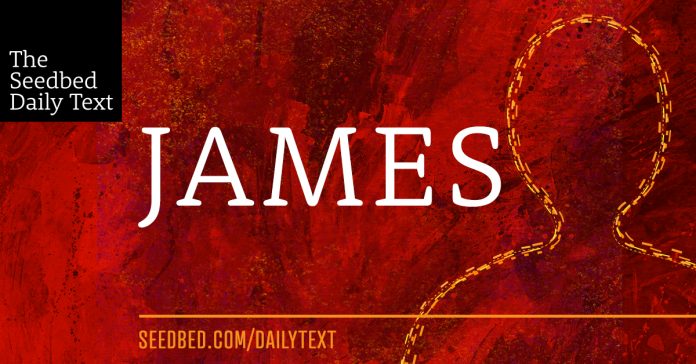 To Our Fellow Sowers,

Seven years ago yesterday, January 6, 2012, the Day of Epiphany, we set out to begin sowing for a great awakening. By the grace of God, the boldness of Asbury Theological Seminary, and the contributions of many we are still sowing. Why? We don’t believe the church needs more books and more conferences and more emails filling our inboxes. We believe the church needs better disciples. The late E.M. Bounds said it well, “The church is looking for better methods. God is looking for better men (and women).” Only an awakening to the fullness of the Gospel of Jesus Christ holds the potential to make real Christians. Only an awakening to the power of the Word of God and the Spirit of God can lead us into the real scriptural Christianity. That is what and why we are sowing.

Today begins a new Daily Text series on the book of James, perhaps the most hard hitting letter in the New Testament—the stuff of real Christianity.  I’m calling it, The First Real Christian. Below you will find the introduction to the series. Monday begins the series proper, so consider inviting your family, friends, even your whole church to join the journey.

I sometimes buy books for the title. You too? The other day I came across one too good to pass up. Be warned. It’s long—not the book, but the title.

“You may choose to look the other way, but you can never say again that you did not know.”

He took on the slave trade of the 18thcentury, mobilizing an abolitionist movement we marvel at to the present day. He once remarked,

“To live our lives and miss that great purpose we were designed to accomplish is truly a sin. It is inconceivable that we could be bored in a world with so much wrong to tackle, so much ignorance to reach and so much misery we could alleviate.”

Reflecting on his own life and abolitionist passion he commented,

“So enormous, so dreadful, so irremediable did the [slave] trade’s wickedness appear that my own mind was completely made up for abolition. Let the consequences be what they would: I from this time determined that I would never rest until I had effected its abolition.”

In an age of profound blight and a church of passive slumber, Wilberforce rose up as a real Christian. When it came to taking on slavery, he was willing to go first.

I think of James, the brother of Jesus, like this. He stepped forward, put his money where his mouth was, and called the followers of Jesus to stop phoning it in. James is an agent of awakening. His life and words operate like a reverse snooze bar. As we start to drift into sleep he is a wake up call.

After scarcely saying hello he offers this: Consider it pure joy, my brothers and sisters, whenever you face trials of many kinds[.] James 1:2. How about this one? “Do not merely listen to the word, and so deceive yourselves. Do what it says.” James 1:22.  And he caps off the first chapter with this: “Religion that God our Father accepts as pure and faultless is this: to look after orphans and widows in their distress and to keep oneself from being polluted by the world.” James 1:27. Sounds like James and Will would have been good friends. In chapter two he cuts to the core letting us know in no uncertain terms that “faith without works is dead.” He settled for nothing less than the genuine article. I think of him as the first real Christian.

I remember her. Mrs. Betty Jane was old the first time I met her yet in all the years I knew her she never got older. She ran a furniture store down on Main Street in my hometown of Dumas, Arkansas. As a young person I stopped in often to say hello. She would always greet me with the same question, “John David, what scripture are you standing on today?” She always knew hers. She read the whole Bible through every year from cover to cover and wrote at least as much in the margins as was already on the pages. And she probably loaned more money to poor people without expectation of repayment than her store brought in from sales. She would often remind me, “John David, you can’t know the will of God if you don’t know  the Word of God.” Mrs. Betty Jane and James would have been friends.

I remember my early days as a youth pastor at the Central United Methodist Church in Fayetteville, Arkansas, trying to herd a throng of loving reprobates well before I knew myself as one of them. Lydia was the first real Christian I came across in those early days. More than Sunday School answers, she knew Jesus, and clearly he knew her. The great thing about first real Christians is they have a way of almost effortlessly reproducing themselves. Not seconds and thirds but more firsts. I remember Lissa, Gretchen, Blair, Christy, Blue, John Mark and on I could go. I will never forget Dan, the first real Christian young man who came into the picture. Unlike anything I had ever witnessed at the time, his exuberant faith proved to be a force multiplier. Dan’s love of Jesus was personal, powerful and public. We’ve all seen people who wear their faith like clothes that don’t fit. Dan donned faith, hope and love like a perfectly tailored three-piece suit, though he wouldn’t have been caught dead in a suit. One day he made a comment in passing he likely does not remember but I will never forget. It has come to capture some of the essence for me of what growing up in faith means. He said, “J.D., it’s like every time the Lord does something new in my life I look back and wonder if I was even a Christian before.”  Another first real Christian, James would have loved him. My job quickly became holding the door for the likes of these kids and their friends as the Holy Spirit swept through their schools and awakened our whole church.

These first real Christians are not common but they are everywhere. Anybody who is willing to step up to the plate can be one. Only one person can be first in the world. In the Kingdom of God, anyone can be first who is willing to be last. From Francis of Assisi and Francis Asbury to Rosa Parks and Martin Luther King, Jr., to be a real Christian means you have to be first and to be first means to be last. A real Christian doesn’t just believe the Word of God, she develops a track record for doing it; over and over and over again. It’s not complicated, yet it’s not easy either. James will train us in the ways of real Christians; of what it means to be faithful, available and obedient.

How about you? Do you remember the first real Christian you ever met—who really walked the walk in a way that woke you up to the real thing? We want to hear those stories over the next month and we would love to share them more widely with your permission. For the first time ever, we have the book, The First Real Christian, before we start the series. If you will share your “first real Christian” story with us, we will send you a special offer for a free copy when you buy one for yourself. Reply to this email or post in the Daily Text Facebook Group and we will be in touch to get one in your hands.

See you bright and early in the morning for James 1:1!