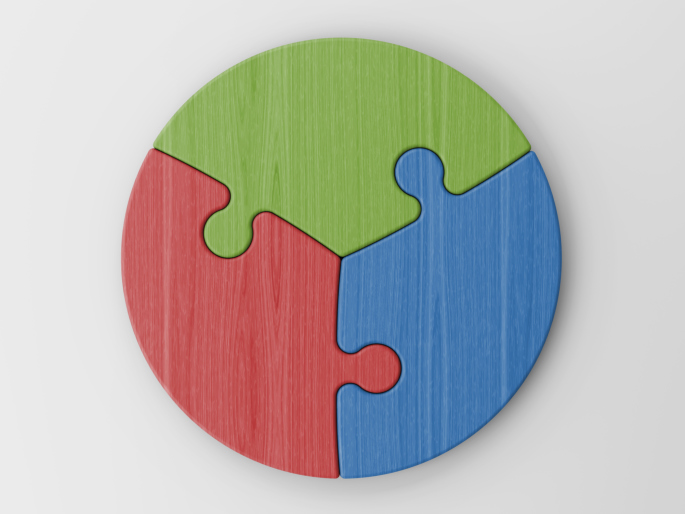 One of the activities my wife and I like to do from time to time is to put together puzzles. It can be a calming and centering exercise…unless…unless…you draw near to the end of making the edges or even close to completing the puzzle and discover there is a missing piece. You turn the house upside down (or at least I do) looking for it but can’t find it anywhere. Frustrating isn’t it? One time we were putting together a Doc McStuffins puzzle with Julianne and discovered that the puzzle we were putting together had an extra piece and was an exact duplicate of one of the existing pieces. I couldn’t help but wonder…oh, no! Somebody purchased this same puzzle and is missing this very piece. We empathized deeply! Because there is not much like the frustration of not having the closure of completing the puzzle such that it looks like what the outside of the box pictures. I hate to put an incomplete picture in your mind, but I want you to keep that image of a puzzle with a missing piece there for a few moments…

Carrie and I recently disconnected our cable service and while a great liberating feeling came in not having to pay out the wazoo for it and we couldn’t keep up with the DVR anyway, we’ve found ourselves wrapped into the benefits of Amazon Prime, which enables us to catch up on some things that we’ve long been way out of the loop on. Like Downton Abbey – we’ve been binge-watching the series, now about six years behind the curve. The truth is that Carrie and I had sworn off dramas and tried to stick to sitcoms when I entered the ministry because we figured, “Hey, there’s drama enough in the church, right?” Alas, we’ve fallen back into the trap. Anyway, I’ve found it interesting to trace the development of several characters and there is one character in particular that has grabbed my attention – Mr. Bates, the valet to his lordship, Robert Crawley, the Earl of Grantham, and the way Mr. Bates responds to the conniving ways of Thomas, who begins the series as a footman, jealous that Mr. Bates got the job of valet instead of him.

Mr. Bates, that I have seen to date, is plagued with a past of disappointment and crime, including theft, but has

grown into an honorable and trustworthy gentleman. One day Bates caught Thomas stealing wine from the cellar and while he had the opportunity to do so, he did not report what he witnessed to the head butler. This is interesting as there had been quite a discrepancy between the records of how much wine they were supposed to have versus the actual inventory on hand. Thomas, in the meantime, found a way with a couple of accomplices to try to convince the head butler that it was Mr. Bates who was taking the wine and for a while it looked as though Mr. Bates was going to go down and be dismissed from Downton.

But the tables were turned when one of the accomplices came clean and told the truth that Thomas had told them to support his story against Mr. Bates without having witnessed anything. So Mr. Bates was proven innocent and the head butler gave him a chance to reveal anything he may have witnessed. Now here is where many of you, like me, who watch the show put yourself into the story and were yelling at Mr. Bates to turn Thomas in and reveal all…what more could be better than to exact vengeance on the one who intended him harm?

“Turn Thomas in! Get him out of there!” But what did Mr. Bates do? He remained silent. Argh! He had the chance right there! He could’ve brought closure! He could’ve completed the puzzle and revealed the truth! But he left the missing piece out.

What does Mr. Bates and an incomplete puzzle have to do with Jesus reading the Scripture and teaching in the synagogue?

Well there is something interesting that takes place. When Jesus completes the portion of Isaiah that he had chosen, Luke notes (4:20) that “He rolled up the scroll, gave it back to the attendant, and sat down.” What I was curious about as I was studying this passage was to ponder if there was a reason why Jesus quit reading at the portion where he stopped and then rolled up the scroll. So I went to where Jesus quoted and I want you to see what I saw, so let’s compare the two:

The Spirit of the Lord is upon me,
because he has anointed me
to bring good news to the poor.
He has sent me to proclaim release to the captives
and recovery of sight to the blind,
to let the oppressed go free,
to proclaim the year of the Lord’s favor.”

The spirit of the Lord God is upon me,
because the Lord has anointed me;
he has sent me to bring good news to the oppressed,
to bind up the brokenhearted,
to proclaim liberty to the captives,
and release to the prisoners;
to proclaim the year of the Lord’s favor,
and the day of vengeance of our God;
to comfort all who mourn.

There were a couple of slight differences you might’ve picked up on – a topic to explore at another time, but I’m particularly interested in why Jesus stopped at “year of the Lord’s favor,” and did not continue on into “the day of vengeance…” After all, God’s vengeance is against God’s enemies, right? What would be wrong with that? Why wouldn’t Jesus go on and satisfy the vengeful longings of those who were looking for the overthrow of the world’s kingdom? It would be true! It wouldn’t be unjust!

He could’ve put that last piece in there, but he didn’t.

Consider this. I think Jesus chose deliberately to stop reading when he did because he came to teach and to live a gospel whose first word and last word – from beginning to end – is a word of love and grace, of good news to the poor and oppressed and of the favor of the Lord. That’s why it’s important that Luke notes the detail that Jesus “rolled up the scroll” before vengeance would have its say. Jesus was preaching a gospel of transformation where the people of God would lay down their desire for vengeance and cross over to love.

Rudy Rasmus, pastor of St. John’s UMC in Houston, tells the story of his crossing over to love. His daughter was harmed at the age of four, but he didn’t find out until she was 18. And when he found out, it challenged every aspect of his being to not just kill the guy that had hurt her. Here’s what he said:

I knew I was crossing over when I was in a place that I thought was Christianity, that place where everything is going really pretty good, and it doesn’t require any real effort to love. I knew I crossed over when I could love in spite of knowing that I have the capacity to hurt somebody that hurt my family. That’s when I knew. As a matter of fact, that’s when I told my congregation, ‘This week I became a Christian.’ That’s when I crossed over from knowing I had the capacity to do some damage and not do it…that was it.

Then Rudy went on to tell a test that he faced thereafter. He was driving and came upon a red light. And across the street right in front of his truck walked the guy who had harmed his daughter. And he said to himself,

Is this a blessing or a test? In those seconds, I was thinking ‘Man, I would really like to run over this cat.’ But he was talking to another guy who was crossing the street in front of me, though, and I’m thinking I really don’t want to run over the other guy, but really I don’t want to run over either one of them. So I let them both cross in front of my truck. And when they got to the other side, I called my daughter and said, ‘Guess who just walked in front of my truck?’ And she knew immediately. I said, ‘Guess what?’ She said, ‘Daddy, obviously he’s still walking.’ I said, ‘Yeah.’ She said, ‘That’s good daddy, because I would have hated to have lost twice.’ I think that day I passed the test.

Did you hear that? “I knew I crossed over when I could love in spite of knowing that I have the capacity to hurt somebody that hurt me, my family.”

Where do we fit? I think we’re like the assistant. And now the scroll, the puzzle is back in our hands, and here’s the challenge. What happens when the scroll is placed in our hands and all of a sudden the piece of the puzzle that was missing – vengeance – is uncovered and you can place it back in.

Will you? Or will you allow Jesus to set the parameters of the gospel? Will you allow yourself to be won over, to cross over to the gospel of love – knowing that that was and is the way of the Christ, who, anointed by the Spirit, disarmed the powers not by vengeance and might, but by suffering, humility, forgiveness and love?

We know what Christ did with the whole realm of nature at his disposal. He renounced the spiritual forces of wickedness, rejected the evil powers of this world…accept the freedom and power God gave him to resist evil, injustice, and oppression in whatever forms they presented themselves. (Just go up to the previous episode in Luke’s gospel for proof.) And when we survey the wondrous gospel of love, in the suffering of the Christ, how do we respond when the whole realm of the puzzle is at our disposal?

Were the whole realm of nature mine, that were an offering far too small, love so amazing, so divine, demands my soul, my life, my all…

You see if you can cross over to love, the puzzle changes its shape and so are we shaped, such that we reflect the pattern after which we are fashioned – Jesus Christ. Then we will truly be “Christians” – which means “little Christs.”