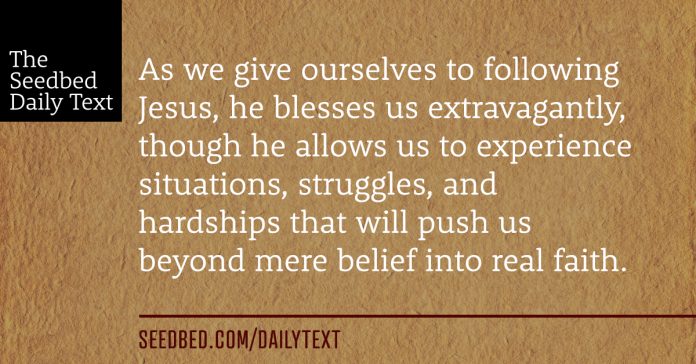 Late in the afternoon the Twelve came to him and said, “Send the crowd away so they can go to the surrounding villages and countryside and find food and lodging, because we are in a remote place here.”He replied, “You give them something to eat.”They answered, “We have only five loaves of bread and two fish—unless we go and buy food for all this crowd.” (About five thousand men were there.)But he said to his disciples, “Have them sit down in groups of about fifty each.” The disciples did so, and everyone sat down. Taking the five loaves and the two fish and looking up to heaven, he gave thanks and broke them. Then he gave them to the disciples to distribute to the people. They all ate and were satisfied, and the disciples picked up twelve basketfuls of broken pieces that were left over.

“You give them something to eat.”

Because we know this was not a “men’s only” following we know there were likely quite a few women and children there. With 5,000 men, a Baptist estimation of the crowd would probably put it at about 15,000. The Methodists would probably round it on up to 20,000. Suffice it to say there were a ton of people there.

“You give them something to eat.”

This is what he told his twelve disciples to do. Jesus knew it was an absurdity, and I bet he struggled to keep a straight face when he said it.

What’s the point of this request? I think he wanted them, and us, to fathom the expansive gulf between Divine possibility and human capacity. If you’ve noticed, these miracles have been steadily increasing on the “only God could do this” scale. It’s one thing to heal the sick and quite another to calm a storm.

Today’s miraculous feat we might file in the category of David Copperfield (or David Blane) illusions. The problem is every one of those people actually ate until they were satisfied. If there’s one thing we can say about food, it’s not illusory. This was a miracle on par with the water into wine episode. It’s not something we can delve into here, but I do find it interesting that these two miracles involved the super ordinary elements of bread and wine and yet in a completely supernatural way.

Back to the disciples dilemma. It seems they decided to play along with Jesus’ improvisational offer.

They answered, “We have only five loaves of bread and two fish—unless we go and buy food for all this crowd.”

Jesus called their bluff. He essentially said to them, “Give me the ball.” Here’s where it gets really interesting.

Taking the five loaves and the two fish and looking up to heaven, he gave thanks and broke them. Then he gave them to the disciples to distribute to the people.

Jesus does what any Jew worth their kosher salt would do in a pre-meal moment. He says the blessing. These four ordinary verbs: Took, blessed, broke and gave, happened at every meal. A deeper look reveals something quite extraordinary going on.

These four verbs all look to be in the past tense. When we look at the original language we find the first three verbs are past tense verbs. The final verb, “gave,” is actually in the “imperfect” tense. It signifies an action that happened in the past that has ongoing action. It keeps on happening.

Do you see it? The fishes and loaves are literally being multiplied in his hands in the very act of giving. The miracle keeps on happening until . . .

They all ate and were satisfied,

This wasn’t a miracle for the masses. Sure, they ate and were satisfied, and they lived to be hungry again. Truth is, most of them probably had no idea of the magnitude of what happened. As they sat in their groups of fifty, it was the disciples who kept going back to Jesus and distributing the food. The Twelve had the court side seats.

and the disciples picked up twelve basketfuls of broken pieces that were left over.

Remember that early miracle in the story where Jesus filled two boats with fish to the point of sinking? Are you noting the trend. On that day, Jesus “took” his first followers; or perhaps I should say they gave themselves to follow him. Remember that morning after he prayed all night and set apart his disciples the next morning? He blessed them. I think of that night on the Sea of Galilee, in the middle of that perfect storm, as the time when Jesus “broke” his disciples, pushing them past mere belief and into real faith. If we read back a few verses prior to today’s text, we see Jesus commissioning the Twelve to go on mission. He “gave” them to the world. And remember, this past tense, “gave” keeps on giving and giving and giving.

and the disciples picked up twelve basketfuls of broken pieces that were left over.

Today’s miracle was Jesus way of “signing” his disciples (and us) that “this is how we do it.” As we give ourselves to following Jesus, he blesses us extravagantly. Next, he allows us to experience situations, struggles and hardships that will break us, pushing us beyond mere belief into real faith. And all along the way, he will give and give and give us to the world all around us.

This is the holy cycle of never ending, ever giving Love.  The secret to this life is staying in his hands.

Tomorrow will bring us face to face with Jesus and the question of all questions. Get a good night’s sleep. We’re almost to the Mountain.