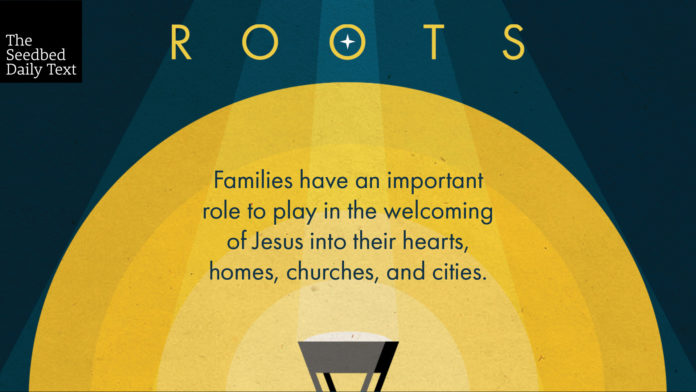 Then an angel of the Lord appeared to him, standing at the right side of the altar of incense. When Zechariah saw him, he was startled and was gripped with fear. But the angel said to him: “Do not be afraid, Zechariah; your prayer has been heard. Your wife Elizabeth will bear you a son, and you are to call him John. …He will bring back many of the people of Israel to the Lord their God. And he will go on before the Lord, in the spirit and power of Elijah, to turn the hearts of the parents to their children and the disobedient to the wisdom of the righteous—to make ready a people prepared for the Lord.

Advent is a time for families. And it is through families—the family of God and faithful natural families—that God works.

In the beginning of our Advent journey exploring the roots of Jesus, we considered that we each come from someone (family lines), somewhere (locations), and something (stories). When we meet Jesus, and we join him on the path to the awakened life, there is a connecting of threads that goes on, often unseen, in the background.

We become a part of the family of God, a fellowship of like-minded and like-hearted believers whose goal and aim is to glorify God in the time we are given on earth. We are swept up into a plan for the world that is so much greater than our own, and is better than any adventure we could dream up for ourselves.

Elizabeth and Zechariah were swept up into the Advent story, after spending most of their lives going about their normal day-to-day as a Hebrew family. A levitical priest, Zechariah encounters an angel while at the altar of incense in the Temple. His wife, Elizabeth, a relative of Mary, is about to become pregnant with John (the Baptist), who will “go on before the Lord, in the spirit and power of Elijah…to make ready a people prepared for the Lord” (Luke 1:17).

With the nation of Israel under the thumb of the Romans, the idea that their son was about to be used by God to shake up both the faithful and the faithless to awaken to God was most probably a wonderful prospect. Some parents want their children to grow up to be contributing members of society. Elizabeth and Zechariah were probably quite happy to raise a son whose zeal for the Lord would press the buttons of the unruly hearts of their people.

When Jesus opens a heart to receive him, and to embrace the fullness of the Gospel, his intent is never to stop there. He plans to use anyone in one’s natural family who will come along, and, if not, the family of God given to us to encourage us in our faith. There is always a network of those impacted, who get swept up in what the Lord is doing in our midst.

The Advent project was an extended family affair from the beginning, and is intended to be so with us as well. Jesus involves families in the holy work of welcoming of Jesus into their hearts, homes, churches, and cities. Families become intercessory cells, prayer posses, enlisted by the Holy Spirit to partner with Christ in the breaking down of strongholds: “The weapons we fight with are not the weapons of the world. On the contrary, they have divine power to demolish strongholds” (2 Cor. 10:4).

The family of God was designed to work together, just as Elizabeth and Zechariah had a significant role to play in both John and Jesus coming to maturity together, ready to face the fire that would come with their mission to bring God’s love and power on earth.

John would “make ready a people prepared for the Lord” (Luke 1:17), and Jesus would fulfill the words of Luke 4:18-19: “The Spirit of the Lord is on me, because he has anointed me to proclaim good news to the poor. He has sent me to proclaim freedom for the prisoners and recovery of sight for the blind, to set the oppressed free, to proclaim the year of the Lord’s favor.”

Parenting Advent was no easy task, and neither is carrying awakening in our hearts for our homes, churches, and cities. But, by the power of the Holy Spirit at work within us, he will see it accomplished.

Lord of your brave family, I surrender my own heart to work with the family of God, and my own natural family as able, to see your Kingdom come, your will be done, here on earth as it is being done in heaven. Show me the part I have to play, and lead me into acts of faith that open hearts to awakening. In Jesus’ name, amen.

How has the family of God become a community with which you can participate in sharing the love of God in your town or city? Is there something you have planned as a way of helping others for which you could stop and pray, right now, for God to move in awakening?