Jesus and the Irony of It All - Seedbed
close
Menu 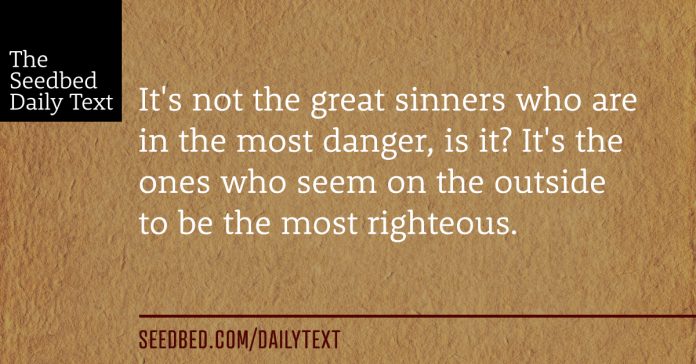 When one of the Pharisees invited Jesus to have dinner with him, he went to the Pharisee’s house and reclined at the table. A woman in that town who lived a sinful life learned that Jesus was eating at the Pharisee’s house, so she came there with an alabaster jar of perfume. As she stood behind him at his feet weeping, she began to wet his feet with her tears. Then she wiped them with her hair, kissed them and poured perfume on them.When the Pharisee who had invited him saw this, he said to himself, “If this man were a prophet, he would know who is touching him and what kind of woman she is—that she is a sinner.”Jesus answered him, “Simon, I have something to tell you.”“Tell me, teacher,” he said.“Two people owed money to a certain moneylender. One owed him five hundred denarii, and the other fifty. Neither of them had the money to pay him back, so he forgave the debts of both. Now which of them will love him more?”Simon replied, “I suppose the one who had the bigger debt forgiven.”“You have judged correctly,” Jesus said.Then he turned toward the woman and said to Simon, “Do you see this woman? I came into your house. You did not give me any water for my feet, but she wet my feet with her tears and wiped them with her hair. You did not give me a kiss, but this woman, from the time I entered, has not stopped kissing my feet. You did not put oil on my head, but she has poured perfume on my feet. Therefore, I tell you, her many sins have been forgiven—as her great love has shown. But whoever has been forgiven little loves little.”Then Jesus said to her, “Your sins are forgiven.”The other guests began to say among themselves, “Who is this who even forgives sins?”Jesus said to the woman, “Your faith has saved you; go in peace.”

Do you see this woman?

Simon, the Pharisee, gets a name. The woman is not named, referred to as a woman from the town who lived a sinful life.

Simon, the Pharisee, is esteemed, honored, admired and respected as a religious leader in the community; one we would have been advised to curry favor with. The unnamed woman was a person of ill repute, likely a prostitute, the kind of woman our mothers and fathers warn us to steer clear of.

Simon, the Pharisee, invited Jesus into his home and Jesus accepted. The woman was neither invited nor welcome in such a place. She came anyway.

Simon offered neither water nor to wash Jesus feet neither a kiss of greeting nor oil for anointing. The woman washed Jesus feet with her tears and dried them with her hair then kissed his feet and anointed them with expensive perfume.

The Pharisee lives forever enslaved to a debt he can never repay because he never realizes it. The woman lives forever free because she has received forgiveness for a debt she knew she could never repay.

Do you see this woman?

The Pharisee was so blinded by the light of his own self-righteousness he could not see past himself. Not only did he not see “this woman,” he didn’t really “see” Jesus. That’s it isn’t it? Until we can see “this woman” and know that we are just like her despite not having made any of her same mistakes, we will never “see” Jesus.

It’s not the great sinners who are in the most danger, is it? It’s the ones who seem on the outside to be the most righteous. It’s not the true reality that gets us in the end. It’s the false appearances. The grave danger of hypocrisy is the hypocrite is the last one to know.

It’s why the surest, safest and most secure bet in the universe comes down to a singular prayer, “Lord Jesus Christ, Son of God, have mercy on me a sinner.” This is the truth that sets us free. This is the way we learn to “see.”

We will be departing Nain first thing in the morning. As we near the mountain, we will be crossing the Sea of Galilee. Bring your life jacket.

Take an extra minute or two of looking upon the scene from today’s text. Can you see her with the “eyes of your heart?” What does she look like? Describe her? Can you see yourself there? Go there beside her.

© Seedbed 2021
Jesus and the Irony of It All
MORE STORIES