Jesus Is King of the Human Heart - Seedbed
close
Menu 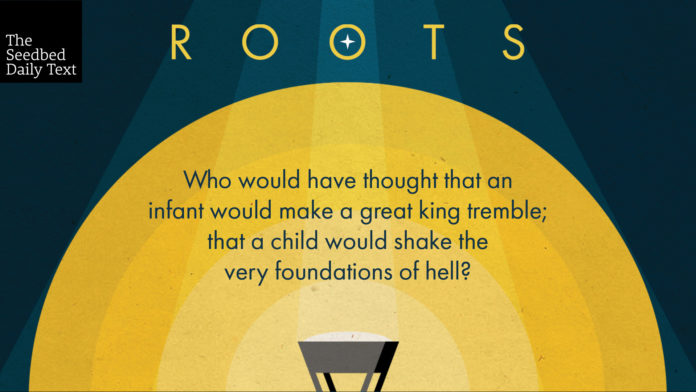 Then the Lord said, “Rise and anoint him; this is the one.”

So Samuel took the horn of oil and anointed him in the presence of his brothers, and from that day on the Spirit of the Lord came powerfully upon David.

“Once in royal David’s city,” goes the familiar Christmas carol. It reminds us of the ancient promise that through a royal family line, from the lineage of the great Hebrew King, David, the Messiah would be born. Our Advent verse returns to us: “A shoot will come up from the stump of Jesse [David’s father]; from his roots a Branch will bear fruit” (Isa. 11:1). David, the son of Jesse, will be a key star in the constellation of spiritual royalty that leads to the birth of the bright Morning Star (Rev. 22:16), Jesus—the King of the human heart.

David. In 1 Samuel 16, Samuel the prophet is told by the Lord to seek out the new king chosen to lead his people, a king God would choose from among the sons of Jesse of Bethlehem. Samuel finds Jesse and evaluates each of his sons, searching for kingly qualities and a royal bearing in each young man. But the Lord God will have none of it: “Do not consider his appearance or his height,” the Lord says. God knows exactly what he’s looking for. While Samuel looks on the outward appearance, God is looking on the heart (1 Sam. 16:7).

David is framed in history as a man after God’s own heart (1 Sam. 13:14; Acts 13:22). Why is he framed that way? He is anything but morally perfect and behaviorally sound. Power can corrupt, and David’s lusts led him into adultery and the murder of an innocent man. Once again, Jesus’ family tree, royal as it is, is full of the kinds of real people whose stories should make us all grateful that the Lord of abundant grace accepts and works with us just as we are.

What attributes did David show that made him so noteworthy as a man whose heart was after God’s own? David was a worshipper at heart. His focus on intimate praise and the acclaim of his Father in heaven fills the book of Psalms, which in turn has filled the hearts of worshippers for millennia. David knew he was loved. David also knew how to repent when he had sinned, even in his most hard-hearted moments. He understood that without the favor and presence of God he was nothing. David was humble in this respect, and though he did a few glaringly wrong things in his lifetime, he could receive correction. David was a man who sought to obey God over the trajectory of his lifetime, and this kept him tethered to the heart of God toward him, and the will of God being done through him.

The Lord is never after perfection; our journey will always be uneven at best. He is after the heart. And like David, he uses the small, foolish things of this world, those people that break the “how a leader should look” rules and lead from a heart devoted to God, to confound the wise in this world’s eyes (1 Cor. 1:27). When Jesus comes on the scene, he comes as an infant—with the heart of a King. Who would have thought that an infant would make great kings tremble; that a child would shake the very foundations of hell? When the hands are moved by a heart after God, there is no end to what God can accomplish through us.

From the root of David’s heart will come a branch, and that branch will be known as Jesus, the Messiah, the King of the human heart.

King of the human heart, I stand in awe of your great love, a love that is changing me from the inside out, taking me from glory to glory as each day passes. Your wisdom is guiding me, your love is transforming me, and your patience is pacing me along this journey of faith. This Advent, I say, once again, that there is no one in heaven or on earth that I desire more than you (Ps. 73:25). Give me a heart like David, like Jesus—that pursues your glory above all else. In Jesus’ name, amen.