Jesus Is Lord of the Absolutely Terrified - Seedbed
close
Menu 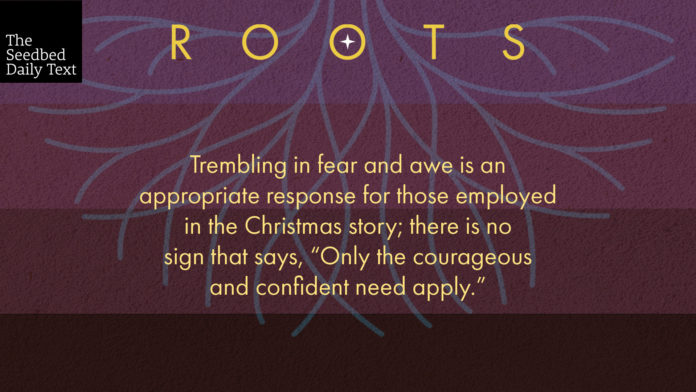 And there were shepherds living out in the fields nearby, keeping watch over their flocks at night. An angel of the Lord appeared to them, and the glory of the Lord shone around them, and they were terrified. But the angel said to them, “Do not be afraid. I bring you good news that will cause great joy for all the people. Today in the town of David a Savior has been born to you; he is the Messiah, the Lord. This will be a sign to you: You will find a baby wrapped in cloths and lying in a manger.”

Our Advent journey brings us to the shepherds, part of the same faith-family story as Jesus, remembered for their wonder that starry night—but also, for their sheer terror. How do you want to be remembered? Would you prefer the words, “Joyful,” and “Courageous,” to come up in conversations when you are mentioned, or would you prefer the words “Terrified,” and “Afraid,” to be the character traits discussed?

Unfortunately, the shepherds didn’t get to choose! These Advent heroes were “terrified,” and all of history since knows it. But they were terrified for a good reason—God was on the move. We do them honor when we recognize that though they were clearly shocked when the angels greeted them in the night sky, they were terrified because of the awesomeness of the cosmic drama unfolding before them. We would most probably have been just as terrified, as afraid as they were, if we had been there. The shepherds took their place within the most profound moment of human history that night, and quickly became “incarnation evangelists” telling others about what they had seen (v. 17-18).

If you’re like me, there are times in our journey of faith when we are plain, raw, straight-up, scared. Can I get a witness? Life throws us a curveball, and before we can say, “Greater is he that is in me!” we’ve taken a hit across the bow and our battleship is sinking.

In “A Charlie Brown Christmas,” which my family watches every year at this time, Linus reads the Christmas story from Luke 2 in the King James version. Who can forget his recitation, security blanket in hand, on that spotlit stage? Coming to verse 9, Linus says “. . . The glory of the Lord shone round about them, and they were sore afraid.” Sore afraid. I like that phrase. Yes, “sore” means “very” in this case, but there is a playful double-meaning here. Have you ever been so afraid you were sore, inside and outside? I have. Your heart aches, your stomach churns, and you aren’t sure that God will come through—that his words to you are believable. Linus, bearing his security blanket, because everyone needs a little support every now and again, confidently reads the Christmas story in that little spotlight on that animated stage. And if he can show some faith, so can we.

It’s in those times, those times of challenge, that we can remember the shepherds—and take heart. Their fear was based in awe, in an overwhelming sense that God was active in bringing Good News to his people. Sure, the situation may have felt intuitively “good” in some way, so they could assume God was at work. But terror is terror, and when we are overwhelmed and scared by a circumstance, we can learn to reinterpret it as a time for awe in what the Lord is doing and will do.

Philippians 4:6-7 says that we are to be anxious about nothing, and the spirit of command in those words cannot be missed. But neither can the tone of compassion. The writer knows that we need peace in our shock-and-awe moments, and suggests that peace lies on the other side of prayer and drawing close to the Father.

The next time you are absolutely terrified, know that the Lord is with you and is about something in the background that will not derail the plans he has for you, plans to prosper you, and to give you a hope and a future (Jer. 29:11). Lean into him in prayer, in worship, in thanks, in community with others—and stay in that place until your fear is absorbed into the presence of God.

Lord of the Terrified, thank you for being my Lord. I’ve known what it means to be afraid and to have you meet me in that place. Protect my heart from getting lost in my worst expectations, and create in me, by your Spirit within, a heart that expects your highest and best as you walk with me through the challenges ahead. In Jesus’ name, amen.

Can you think of a moment this past year when you were terrified or afraid, and felt beside yourself in worry? How did the Lord meet you in that time, and what is your testimony on the other side?