Why Jesus Is the New (Old) Normal - Seedbed
close
Menu 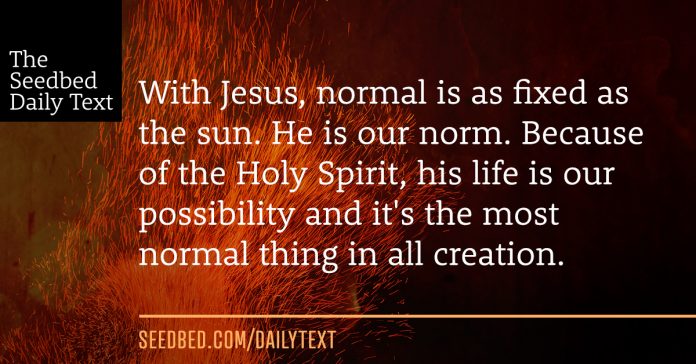 34 Then he looked at those seated in a circle around him and said, “Here are my mother and my brothers! 35 Whoever does God’s will is my brother and sister and mother.”

43. Jesus is the new normal.So where does the idea of “normal” come from? Let’s take this back to the Garden. God’s original image bearers, the paradigmatic human beings, made in his image, represent the norm for the human race. The big problem for the human race from the first people to you and me is we have forsaken normal and exchanged it for abnormal instead. Sin, death and all the brokenness in between are not normal. Are you getting what I’m saying? Over the course of millennia now, sin has become normalized. Why else would we so readily accept it as the inevitable consequence of being human. And the truth—because of the choice of our forbearers, sin and death became the default condition of the human race. Sin is our fallen condition, but it is not normal.After this line of argument, it strikes me now to suggest Jesus is not the new normal. Jesus is the old normal. How about we just say Jesus is the norm. And this is the big issue. We don’t consider Jesus the norm. We typically think of him as an impossible standard bearer. We consider sin, brokenness and death as the norm. And the big problem with norms is they rarely get challenged. In fact, anytime the norms are challenged, the challenger meets extraordinary resistance. Just ask Jesus.The religious elite thought he was abnormal; going so far as to say he was of Satan. Even his family thought he was abnormal. Family systems and religious structures are some of the most powerful “norm” enforcing entities on the planet. Jesus departed from the religious script. He departed from the family script. And anyone who has ever done either of these things knows what happens. They will do whatever lies within their power to bring you back in line. Interestingly enough, it often looks like some form of tantrum.

44. Jesus reforms religious structures and re-frames family systems. On the former, look what he has said so far about fasting and sabbath and the kingdom of God, and the list will grow as we proceed through the story. On families, he put it pretty plainly when he said,

Whoever does God’s will is my brother and sister and mother.”

If there’s one thing we can be sure of, it’s that the world’s vision of normal is a moving target. It’s constantly changing. There’s always a so-called “new normal.”  With Jesus, normal is as fixed as the sun. He is our norm. Because of the Holy Spirit, his life is our possibility and it’s the most normal thing in all creation.

Spirit of the Living God, fall afresh on me. I am tired of considering what is not normal as normal. Make Jesus my normal. Let the Spirit norm the realities of Jesus in me. Melt me. Mold me. Fill me. Use me. For the glory of your name, Jesus. Amen.

How deeply have you normalized the abnormal realities of sin and death in your life? What might adopting the new normal of Jesus and the Spirit-filled life look like?