32 “Now learn this lesson from the fig tree: As soon as its twigs get tender and its leaves come out, you know that summer is near. 33 Even so, when you see all these things, you know that it is near, right at the door. 34 Truly I tell you, this generation will certainly not pass away until all these things have happened. 35 Heaven and earth will pass away, but my words will never pass away.

It’s fascinating to me how Jesus recalls the “days of Noah” in talking about his return at the end of the age. As it was in the days of Noah, so it will be at the coming of the Son of Man. So how was it in those days.

Now the earth was corrupt in God’s sight and was full of violence. 12 God saw how corrupt the earth had become, for all the people on earth had corrupted their ways. Genesis 6:11-12.

You know the story. God instructed Noah to build an ark whereby he and his family and a representation of all the living creatures on the Earth would be saved. Noah did so. In the midst of that, everyone else went about their business as usual lives.

For in the days before the flood, people were eating and drinking, marrying and giving in marriage, up to the day Noah entered the ark;

There’s Noah and then there’s everyone else. In the midst of the strong cultural tides of the time that were sweeping people into all manner of lostness, brokenness and depravity, Noah was doing something completely different. First, he walking with God in obedience. Second he was exercising tremendous faith, building a massive boat on dry land. Third, he was probably being mocked and ridiculed by many. In the midst of a broken and bankrupt culture, Noah built. Noah trusted God.

We live in a similar age, where the culture around us inexorably draws men, women and children into lostness, brokenness and depravity. We don’t have to worry about another flood, but we do know that the present evil age will one day come to a close. It will be just like in the days of Noah. The world will be going about its business as usual. There will be eating, drinking, marrying and video games galore. There will be no reason for people to suspect an unexpected calamity to fall upon them any more than usual. We will probably be at orange on the terror alert scale. Then, suddenly, it will happen. Jesus will return on the clouds, on the eastern horizon. The end will come. It could be today or tomorrow or a thousand years from now.

The big question for us now are these? Are we doing anything distinctively different, perhaps even absurd, from the chaotic and crushing culture around us—other than fighting against it. Are we building anything? Good news: there is an alternative, ark-like project afoot in the world. It’s called the Church. Jesus is building his Church and the gates of hell will not prevail against it. This Church is the new Ark and there is room for the whole human race. This is the vessel by which “all who will come” shall be delivered from the present evil age and into the glorious age to come (which is even now breaking in). Our work is to join ourselves together as an irresistible community of the overwhelming, overcoming grace of God in Jesus Christ—to become fishers of people, ambassadors of the New Creation, one holy nation, a house made up of living stones being built together by God, a city on a hill, the salt of the earth, the fragrance of Christ, and on we could go. It is our solemn privilege and sacred calling.

Will we do it? Are we? That day is coming. Will we blend into the chaotic culture around it, satiating ourselves with its indulgences and luxuries, wringing our hands in political angst, while eagerly awaiting the release of the next iPhone? Or will we build an ark? Will we invest our lives in the only building project that will ultimately stand?

Lord Jesus, thank you for reminding us of the days of Noah. Thank you for the gift of your salvation. Now would you save us from wasting our lives on things that don’t matter. Awaken us to the Church you are building and reveal to us how different it can be from the churches we try to build ourselves. Awaken us to the new Ark, which is your Church, and embolden us with the compassion to love a world getting washed away by all that will not ultimately stand.  Come Holy Spirit! We pray in your name, Jesus. Amen. 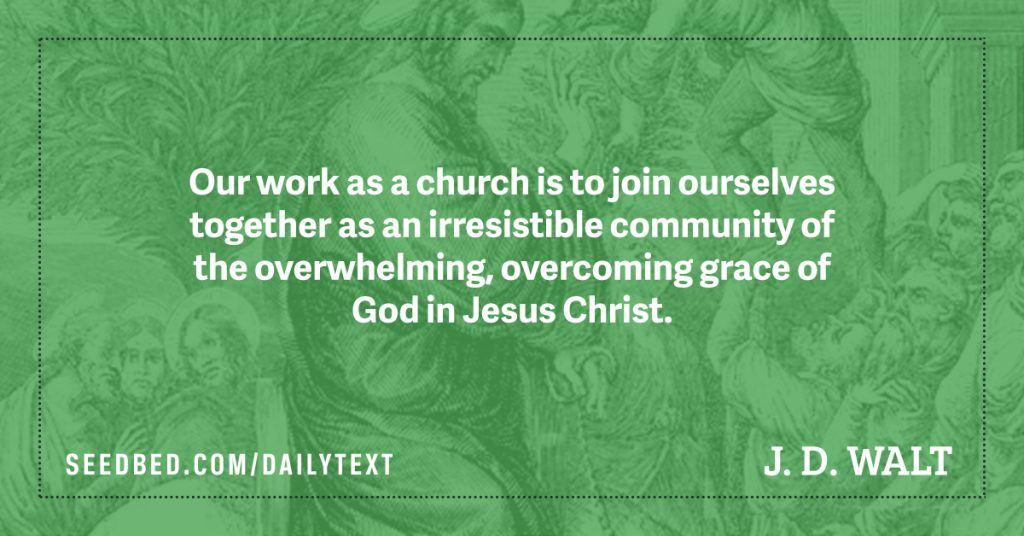 1. How might the present times in which we live be like the days of Noah? Why should that matter to us?

2. What do you make of this analogy between the Ark of Noah and the Church of Jesus Christ?

3. How might your life become an irresistible invitation to join the movement known as the Church of Jesus Christ?