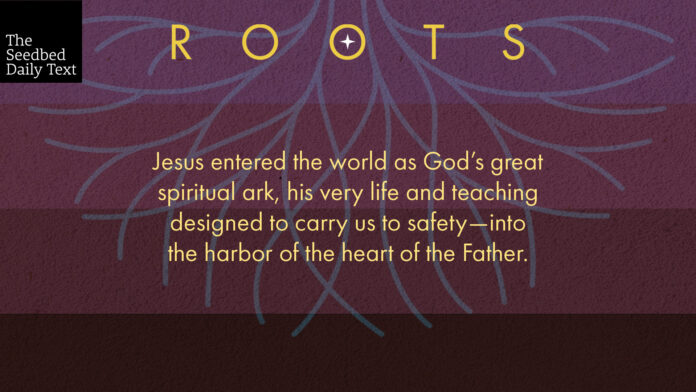 So the Lord said, “I will wipe from the face of the earth the human race I have created—and with them the animals, the birds and the creatures that move along the ground—for I regret that I have made them.” But Noah found favor in the eyes of the Lord.

Noah is one of the most fascinating characters we find in the extended family of Jesus. Noah walks a journey with his family that is remarkable both in its radiant faithfulness and its inescapable difficulty. When we think of Noah, we think of obedience. With just a dream and a schematic from God, Noah builds a massive boat that will float the animals of the world to safety as the land is reclaimed by an ocean of water—and reborn.

God’s favor on Noah was a favor not built on talent, skill, or his parenting accomplishments. God’s favor on Noah’s life was built on Noah’s steadfast commitment to see a great rescue through to the end. And that he did. The stories around that deliverance, written and unwritten, are every bit as important as the end result. But we know that God’s goal was accomplished. An ark was built. Humanity and the created order of animals were saved. The rain came down, the waters rose, and Noah’s ark was lifted toward heaven on the very floods of the world’s judgment.

When Jesus entered the scene on that starry night in Bethlehem a few millennia ago, he did so as God’s great spiritual ark, his very life and teaching designed to carry us to safety—into the harbor of the heart of the Father. And what do we see in Jesus’ life that we see in Noah’s life?

Jesus was born, like us, not to do his own will, nor to see his own vision or purpose or meaning fulfilled and accomplished. Jesus was born to do the will of his Father, to move through the world as a sign that God speaks and guides the willing spirit that is humbly open to serving others.

From the manger where Mary and Joseph’s obedience was put on display for all the world, Jesus would go on to learn the fullness of obedience through “what he suffered” (Heb. 5:8). So it is with us. We all have models of obedience in our lives, toward which we may look and remember each and every day. It is in the moments we face the choice between God’s will being accomplished or our own—as Jesus experienced in the garden of Gethsemane—that our “your will be done” prayer leads us toward full maturity as a disciple of our Master.

Jesus, like Noah before him, chose obedience, and made himself a servant (Phil. 2:6-7). This Advent, following in their footsteps, so can we.

Obedient Lord, who stepped onto the soil of the human experience with love in your heart and a willing spirit, make me like you. In all the moments this season when I am faced with the choice to do my own will or yours, let me choose yours. In Jesus’ name I pray, amen.

Was there a time this past year when you faced just such a moment of obedience? Reading again about Noah’s example, and considering Mary, Joseph, and Jesus leading by that same example, is there a situation impacting your life at the present in which you are beginning to sense what the Father’s will is and the part you have to play? How will you respond?

Get Up Out of That Grave!

Learning to Pray in a Straight Line

The Mystery of Our Religion: He