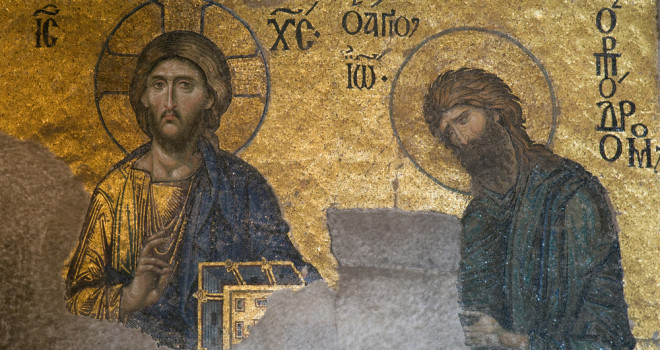 By the end of the fourth century, the Advent-Nativity-Epiphany cycle had been embraced by the churches in the Latin West and Greek East. Similar to Lent, Advent marked the time of preparation for the feasts celebrating the birth and baptism of Jesus, which occurred on December 25th and January 6th. Advent marks the beginning of the new year and the dawn of a new age simultaneously, for with the birth of Christ, the exodus from slavery to sin had begun.

It also heightens the position of the church as standing between the inauguration of the kingdom and its consummation at the Second Coming of Christ. As the herald of the kingdom, the church finds itself in the position of John the Baptist, the forerunner who prepares the way of the Lord (Luke 1:17). In the same way that John was the last of the Old Testament saints and the first to bear witness to the light of the nations, so the church lives between final sighs of the old age and the initial proclamation of the Eighth Day of creation.

As early as the mid-third century, the anonymous writer of De Pascha Computus had connected the birth of Jesus with Malachi’s assertion that on the day of the Lord “the sun of righteousness will rise with healing in its wings” (Mal. 4:2). This important text would later be associated with the feast of Christ’s birth on December 25th because it underscored the light shining in the darkness. John’s role as a prophet “in the spirit and power of Elijah” (Luke 1:17) pointed toward the prophetic role of the church. As John made it clear, one was coming who would baptize with the Holy Spirit and fire (Luke 3:16). The church is the forerunner, operating in the power of the same Spirit who anointed Elijah, John, and all the prophets of the Old Testament. The difference is that the Spirit has been poured out on all of God’s sons and daughters that they might prophesy that the Son of righteousness has come.

Advent both looks back on the coming of the Spirit at Pentecost and looks forward to the coming of the Son at the virgin birth because the Spirit of prophecy was poured out in the former to proclaim the Second Coming of the latter. These three “advents” form a continuum within the history of salvation. The Spirit who unites Father and Son in a communion of love fuses the first and second comings of Christ. Part of the preparation during the season of Advent is for the church to remind herself of the prophetic role she must play within the world. The baptism of the Spirit unleashes the sanctifying and charismatic graces through the intoxicating presence of the Lord of the Spirit so that the church may enact the kingdom and prepare the way for the Lord.

As the forerunner of Christ, John the Baptist took a vow that separated him from the broader culture. He went out to the desert places in order to become a voice crying out in the wilderness. His ministry reminds the church of its pilgrim status between the dawn the new age and its consummation. There is a dynamic to John’s ministry that one also finds in Jesus. It is a movement of withdrawal and engagement. Jesus recedes from society where he is tempted for forty days, prays to the Father, and radiates the transfigured glory of the Godhead. Yet, like John, he returns from the desert in the power of the Spirit to proclaim liberty. The mission of the church as forerunner of the Second Coming flourishes when the people of God remember that they are wayfarers who hear the siren song of the Spirit calling them first to withdraw into the presence of God and then to extend that presence to others.

This movement of withdrawal and engagement corresponds to the Son’s humiliation and exaltation. The Son’s first advent was a divine kenosis so that humanity’s resurrection in the Spirit at the second advent would be their theosis. Charles Wesley’s famous hymn “Love Divine, All Loves Excelling” gets at this movement from heaven to earth and earth to heaven between the first and second advents of Christ. The first stanza begins “Love divine, all loves excelling / Joy of heaven to earth come down” and the final stanza proclaims “Changed from glory into glory / Till in heaven we take our place / Till we cast our crowns before Thee / Lost in wonder, love, and praise.” Until that final day, the church’s acts of worship keep it distinct from the world so that it never loses sight that it’s looking for a city whose builder and maker is God while its acts of service move back out into the world to make the crooked places straight.

Finally, John the Baptist prepared the way of the Lord by initiating new politics so that every valley would be raised up and every mountain brought low. The new politics John proclaimed pointed toward the church as the heavenly commonwealth where the glory of the Lord will be revealed. The glory comes on the well-worn faces of the sons and daughters of God as they seek to live together in unity and so testify that a new form of human existence has come. The nineteenth-century mothers and fathers of the holiness movement understood that the politics of the church, like the gift of sanctifying grace, must purge sins from her midst so that she may be the bride God has called her to be. Forged from every tribe and tongue, the politics of the kingdom can bathe us in the glory of a world without end.

The purpose of Advent is for the church to prepare for the feasts of the birth and baptism of Christ by reminding itself that God has called it to be the forerunner of the King. From the desert of John the Baptist to the sawdust of the camp meeting tent, it inhabits impermanent places to bring the gospel of peace that promises an immortal and incorruptible life. This is the hope in which the church exists and which it must embody in its prophetic witness to be a voice crying out in the wilderness. For when the soul finds its rest in God, it can be at peace with itself and its neighbor. This is the ultimate meaning of the angel’s cry, “peace on earth and good will toward all people.”