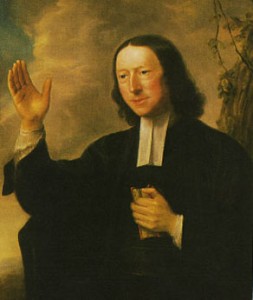 John Wesley’s profound legacy and impact on world Christianity during and since his lifetime can be viewed through a number of lenses. The revival that arose under his leadership changed the social and political structure of eighteenth-century England as the poor and lost found hope in the gospel of Jesus Christ rather than in revolution against the crown. The influence of Wesley’s Spirit-inspired teaching continued unabated as the Methodist movement spread scriptural holiness across the American continent and lands far beyond.

Wesley’s influence as a publisher, if considered separately from all other of his extensive accomplishments, represents an astonishing record in its own right. Wesley lived in a time when Gutenberg’s invention of movable type, which had immediately preceded Luther’s reformation, had coalesced into specialized printing trades in London. Typefounders and printeries were becoming established and were offering exciting new pathways for the spread of the gospel through inexpensive printed text.

Perhaps more than any other figure of his day, Wesley embraced this new technology and issued sermons, tracts, commentaries, abridgments, biographies, and a host of other items that he considered relevant to the spiritual growth of maturing Christians.

Wesley was vitally driven by the reality of the inner witness of the Holy Spirit. His teaching on entire sanctification, or Christian perfection, is the capstone of his legacy. He worked tirelessly to abridge and republish seminal works by historical figures of previous generations, reaching as far back as the apostolic fathers of the first-century church. He constantly curated voices that communicated the work of the Holy Spirit in bringing believers into the fullness of salvation and lives of holy love. 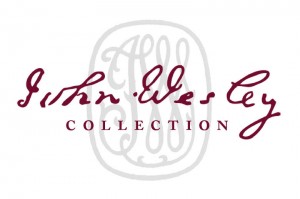 The writings represented in The John Wesley Collection resourced the early Methodists in their quest to spread the gospel by providing the intellectual and spiritual moorings for the messengers of the movement. Seedbed believes these writings are as relevant to our context today as they were in the eighteenth and nineteenth centuries. Consequently, we consider it a sacred calling to join with those who are recapturing John Wesley’s publishing vision for the twenty-first century.

With great joy we present these works to you. In the years ahead Seedbed will reissue selections from this vast collection, which includes his fifty-volume Christian Library, some 150 sermons, countless items from his journals and letters, as well as innumerable tracts, hymns, poems, and other publications, most of which have been out of circulation for decades, if not centuries.

The John Wesley Collection is Seedbed’s offering to the ongoing Wesleyan tradition, providing rare insight into the heartbeat of a movement whose greatest days are yet to come.

We encourage you to enter these texts with determination. Readers who persevere will soon find themselves accustomed to the winsome tenor and tempo of Wesley’s voice and vernacular.

Seedbed’s editors are constantly examining this extensive collection of more than 250 years of vital spiritual writing by the Wesleys and successive generations to find the most relevant and helpful messages that will speak to today’s body of believers. We commend this old-new publishing work to you as one ready to be transformed by the latent power of these ancient truths. It is our prayer that these timeless words will add fuel to the fire of an awakening ready to ignite once again across the world.

From Almost to Altogether 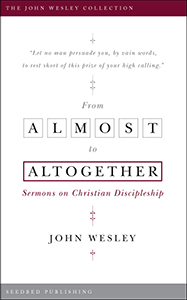 John Wesley’s phrase, “holiness of heart and life,” summarizes his vision of Christian discipleship. When God’s grace renews the heart inwardly, then the believer is transformed by living out a practical Christian life in the world.

From Almost to Altogether is a collection of nine sermons addressing Wesley’s teaching on Christian discipleship. Wesley believed that there is a real difference between the “almost Christian” and the “altogether Christian.” The love of God is such that all are invited to receive that love and the transformation it brings. Collectively, these sermons show what it means to move from almost to altogether in the Christian life. 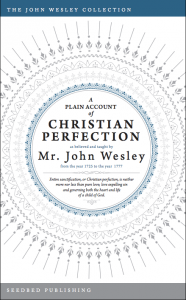 John Wesley’s most significant and enduring theological contribution was that of Christian Perfection, the idea that as we grow in faith, God’s spirit lovingly changes us until we become perfect in love. Unlike human perfection, Christian Perfection is grounded in the completeness of the Christian experience, rather than in a sinless life.

A Plain Account of Christian Perfection is Wesley’s definitive work on the subject, offering a complete discussion of the doctrine and the process of entire sanctification along the spiritual journey.

The writings represented in The John Wesley Collection resourced the early Methodists in their quest to spread the gospel. In each of his works, John Wesley was vitally driven by the practical reality of the inner witness and outer working of the Holy Spirit. The relevance of these writings continues to the present day. It is our prayer that this collection would once again resource a great global awakening to the gospel, fomenting a revolution of Holy Love.

Thirteen Discourses on the Sermon on the Mount 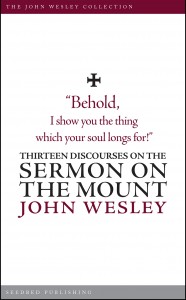 John Wesley’s thirteen discourses on Jesus’s Sermon on the Mount were first published in 1746 in a collection called Sermons on Several Occasions. To this day considered one of the greatest interpreters of the Sermon on the Mount, Wesley approaches the text with the dual understanding of Old Testament law and New Testament gospel that he believed should characterize Christian preaching.

Thirteen Discourses on the Sermon on the Mount confronts readers with Wesley’s understanding of Jesus’s vibrant message: true holiness in Christ, distinguished from merely external religion. Wesley points to Kingdom living in its fullness as he describes the character that Christ Himself embodies and offers to freely share with those who follow Him.

Tongue of Fire or The True Power of Christianity 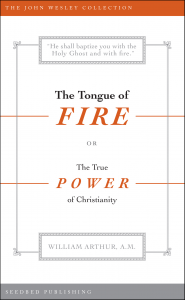 By the time Tongue of Fire was first published in 1856, the once strong Methodist movement in Great Britain was slowly declining into a “form of religion without the power,” as John Wesley feared it would. Now an established denominational body, it bared more resemblance to the tired Church of England than the spirit-fired movement which defined the first Methodists.

Below is a list of the current expected titles for The John Wesley Collection — with many more in the works. List order is not necessarily indicative of release order.

If your heart is as our heart, give us your hand.

Share your email and we'll send you To Sow for A Great Awakening: A Call to Travailing Prayer, as well as weekly updates, announcements of new releases, special promotions, and more!