Know the Destination and Don’t Sweat the Details 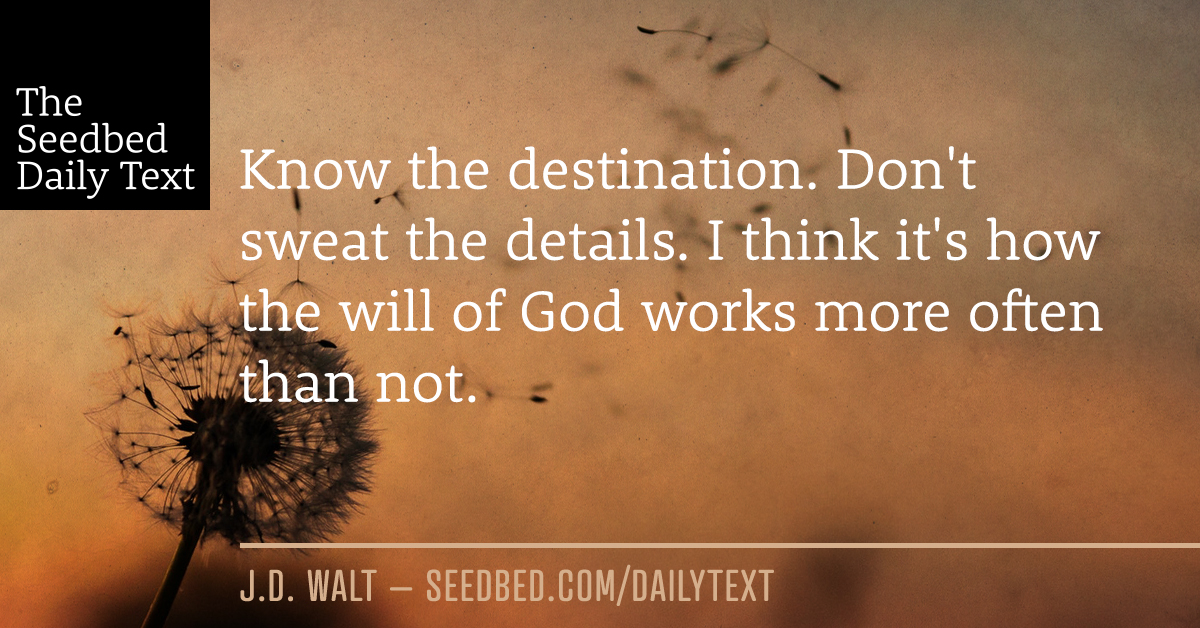 We continued our voyage from Tyre and landed at Ptolemais, where we greeted the brothers and sisters and stayed with them for a day. Leaving the next day, we reached Caesarea and stayed at the house of Philip the evangelist, one of the Seven. He had four unmarried daughters who prophesied. After we had been there a number of days, a prophet named Agabus came down from Judea. Coming over to us, he took Paul’s belt, tied his own hands and feet with it and said, “The Holy Spirit says, ‘In this way the Jewish leaders in Jerusalem will bind the owner of this belt and will hand him over to the Gentiles.’ ” When we heard this, we and the people there pleaded with Paul not to go up to Jerusalem. Then Paul answered, “Why are you weeping and breaking my heart? I am ready not only to be bound, but also to die in Jerusalem for the name of the Lord Jesus.” When he would not be dissuaded, we gave up and said, “The Lord’s will be done.”

“In their hearts, humans plan their course, but the Lord establishes their steps.” (Proverbs 16:9)

I know people who have no plans and I know people who plan everything to the smallest detail. The former strike me as irresponsible and at times lazy. The latter seem like obsessive compulsive control freaks. One goes where the wind blows with a “whatever” mentality. The other insists on having constant confirmations of the confirmation numbers, leaving not even the slightest detail to chance.

Where do you land on the spectrum between them?

Read it again: “In their hearts, humans plan their course, but the Lord establishes their steps.”

It seems like it would be the other way around with the Lord planning our course and us establishing our steps.

Paul gives us a good picture of how faith and planning work together. Paul always knows where he is headed. He is destination oriented and yet wildly open to how and when he will get there and who he will stay with when he does. He knows the big why and where but rarely the who, what, how and when.

Paul knows he’s going to Jerusalem. He has a sense of the route. He has planned his course in his heart, but does he leave the details to chance? No! He trusts the Lord to establish his steps. In taking this approach, Paul opens himself to the possibilities of unplanned prophecies and unexpected serendipities.

Could it be that the more airtight our plans are the less apt we are to receive what the Lord has for us in the journey? What, in our minds, can seem like an irresponsible leaving of things to chance just might be a way of staying responsive and open to the Holy Spirit possibilities along the way. There’s always a bigger plan than our plan and the more we tighten down our plans the more apt we will be to miss the bigger plan.

I think this may be a good Holy Spirit ethic: Know where you are headed. Don’t worry about how you will get there. Know the destination. Don’t sweat the details. I think it’s how the will of God works more often than not.

It’s going to be hard for you Type A’ers. But then again, maybe it’s time for that A to stand for Apostolic.

One last time. In their hearts, humans plan their course, but the Lord establishes their steps. (Proverbs 16:9)

Where do you fall on the spectrum identified above between —nail down everything in the plan and leave everything to chance?

Know the Destination and Don't Sweat the Details