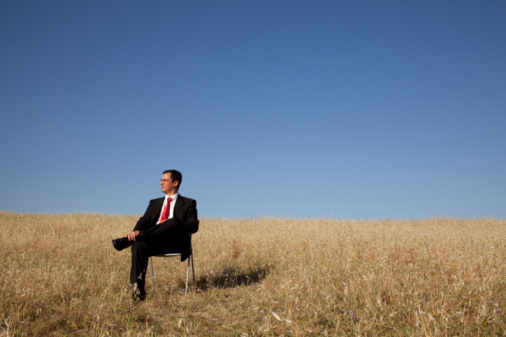 “If you think you’re leading and no one is following you, then you’re only taking a walk.” Makes sense, doesn’t it? Yes, but it’s a lie.

Well, maybe not a lie, but certainly misleading. Couched within this pithy phrase are two assumptions. First, that being a leader is confirmed by having followers. If you’ve got followers, then you’re leading well. Second, that leaders have a good perspective. Wonder if you’re leading? Just take a look around and see. But are these assumptions true? Haven’t there been times when being alone—by making a decision, by ending a relationship, by taking a stand, by withdrawing from a harmful community—was the best act of leadership? Here are three encouragements when facing the perspective of leading alone.

Is leadership confirmed by the leader’s perspective? Can leaders always see their followers? Consider Athanasius, bishop of Alexandria in the 4th century. Athanasius championed the belief that the Logos, the Son of God, is divine and not created, at a time when this debate raged. Arius, Athanasius’ chief opponent, had contended that the Logos was created. For Athanasius, this was not theological minutiae, but the heart of the Gospel. A contemporary summary of one of Athanasius’ famous sayings captures the high stakes of the nature of Jesus: “The Son of God became human so that humans might become God.” If Jesus is anything less than God, believed Athanasius, then the destiny of human beings is drastically changed. And for this leadership, Athanasius was exiled five times. Is leadership determined by the leader’s own perspective? No. That perspective is much too short. Five times Athanasius led alone, but now he helps to lead every orthodox Christian. Five times Athanasius led alone, but 1600 years later he continues to lead the church.

Perhaps one of the reasons we are tempted to believe that leading alone is to be avoided is its danger and difficulty. Being alone—against one’s will—is traumatic and terrifying; threatening and thirst-inducing. This is why Athanasius’ punishment of exile was so horrific and its threat so powerful. Here’s how Eugene Peterson describes exile: “Exile is traumatic and terrifying. Our sense of who we are is very much determined by the place we are in and the people we are with. When that changes, violently and abruptly, who are we?”[1] Leading alone threatens to fracture the leader’s identity.

Maybe this lets us see Jesus’ temptation in a fresh way. The story shows that leadership is about following and that one’s own perspective is too short: Jesus follows the Spirit into the desert (Matt. 4:1) and answers the three temptations from God’s perspective. Yet it is the temptation’s conclusion that is most poignant. Remember: Jesus could have left the wilderness with Satan. But he didn’t. Jesus followed the Spirit into the desert and he refused to follow Satan out of it. Matthew says that angels attended Jesus; Mark adds that there were wild animals; Luke says nothing of anyone being with him. Perhaps that’s the experience of exile, the experience of leading alone: the comfort of angels, the presence of wild animals…and no one else. Yet here we must see our experience in light of Jesus. If Jesus truly is the Christian’s leader, then no Christian leads alone. Christians always follow and do so in Great Company and in a great company. Jesus took the journey of angels and wild animals, in part, so that his followers would not. It is not sentimental to be reminded of it. It is theologically informed and forming leadership. Jesus led alone so that his followers never would.