Power Is Rarely Concerned with Love, But Love Is Always Charged with Power - Seedbed
close
Menu 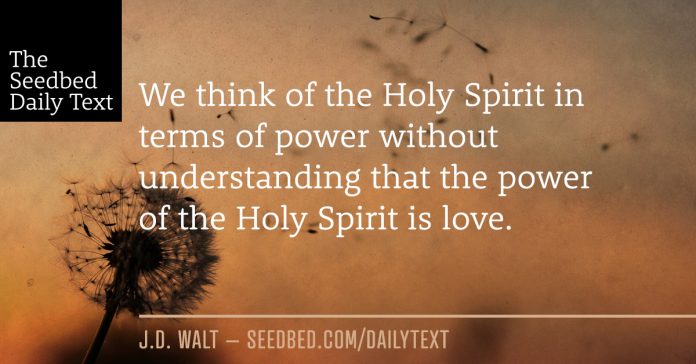 One day Peter and John were going up to the temple at the time of prayer—at three in the afternoon. Now a man who was lame from birth was being carried to the temple gate called Beautiful, where he was put every day to beg from those going into the temple courts. When he saw Peter and John about to enter, he asked them for money. Peter looked straight at him, as did John. Then Peter said, “Look at us!” So the man gave them his attention, expecting to get something from them.Then Peter said, “Silver or gold I do not have, but what I do have I give you. In the name of Jesus Christ of Nazareth, walk.” Taking him by the right hand, he helped him up, and instantly the man’s feet and ankles became strong. He jumped to his feet and began to walk. Then he went with them into the temple courts, walking and jumping, and praising God. When all the people saw him walking and praising God, they recognized him as the same man who used to sit begging at the temple gate called Beautiful, and they were filled with wonder and amazement at what had happened to him.

So what’s the point of the story here? Is it what the apostles did? Thousands of people have been yanked out of wheel chairs with the precise words spoken by Peter to no avail. In the worst cases, they blamed the fail on the faulty faith of the person with a disability. Where’s the love there? And isn’t that the problem? We think of the Holy Spirit in terms of power without understanding that the power of the Holy Spirit is love.

It’s why, all too often, when I approach a beggar on the street I will offer him nothing. In fact the last thing I want to do is to say, “Look at me.” I do my best to avoid eye contact. In my worst self, what I want to say is something like, “Silver and gold I do not have, but what I have I give you—in the name of Jesus Christ of Nazareth: Get a job!” That’s a gate called Horrible.

As noted in yesterday’s reading, the point of the text today is not to focus our attention on the acts of the apostles, but on the Act of the Holy Spirit. Instead of lamenting that this kind of thing is not happening in my practice of ministry, how about I simply behold this beautiful act of love performed by the Holy Spirit? How about I try to see this scene in HD or try reading this text through my 3D glasses. BEHOLD:

How about I allow myself, all these years later, to be “filled with wonder and amazement” at what the Holy Spirit did. Because I have thought so often in terms of the power of the Holy Spirit, I think I need to re-sensitize myself to the sheer, unparalleled acts of Love done by the Holy Spirit.

That’s what the Holy Spirit did at the gate called Beautiful.

Holy Love from the Holy Spirit is always a beautiful gate. Every single time.

What do you see when you behold this scene at the gate called Beautiful? What might it have been like to be the lame beggar? Where in your life are you like him?

© Seedbed 2021
Power Is Rarely Concerned with Love, But Love Is Always Charged with Power
MORE STORIES