Have You Accepted Personal Responsibility for the Death of Jesus? - Seedbed
close
Menu 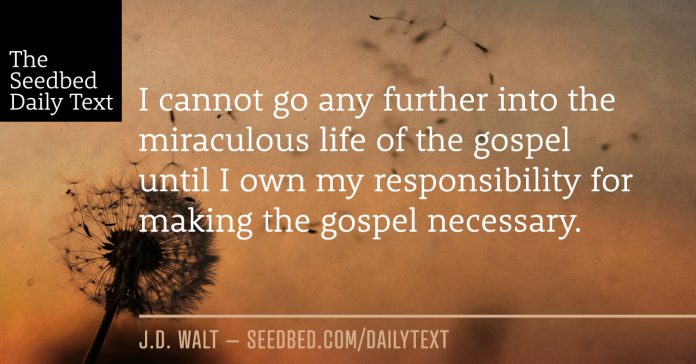 You handed him over to be killed, and you disowned him before Pilate, though he had decided to let him go. You disowned the Holy and Righteous One and asked that a murderer be released to you. You killed the author of life, but God raised him from the dead. We are witnesses of this. By faith in the name of Jesus, this man whom you see and know was made strong. It is Jesus’ name and the faith that comes through him that has completely healed him, as you can all see.

Talk about a plot turn in Peter’s proclamation. The guy who had never walked a step is leaping and dancing. The people are standing in amazement and wonder. Peter is telling them that it wasn’t their power that healed the man but the love of Jesus. Then this:

At a moment when most of us would be slapping high fives and snapping selfies with the healed guy, Peter does something completely different. He preaches the gospel.

And he made it personal. I’m no grammarian, but by my analysis, four (4) times Peter uses the second person personal pronoun, “You.” Not “they” or “them” or “him” but you.

When someone levels an accusation at you, you must ask the question, “Me?” And you must face the reality of “Yes, you!”

And the beautiful thing about the second person personal pronoun is by naming none of us, he includes all of us. This is the ultimate story that the law of sin and death is writing through unredeemed humanity, “You killed the author of life!”

How do you deal with that? Can you own some of the responsibility here? Until you do, you will never get on with the gospel—of becoming a real Christian.

So why isn’t Peter saying “I” or “Me” here? Peter had obviously dealt with his three little problems on the eve of Jesus’ death. He faced the bitter weeping of his own blame. And he received the grace of forgiveness. The log had been removed from his eye and he was now removing the spec from theirs.

I cannot go any further into the miraculous life of the gospel until I own my responsibility for making the gospel necessary.

Have you come to the place where you are taking personal responsibility for the crucifixion of Jesus? Why or why not? Why might this be essential?