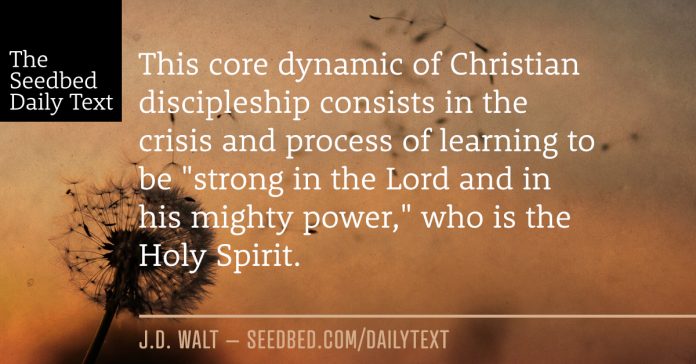 Now Stephen, a man full of God’s grace and power, performed great wonders and signs among the people. Opposition arose, however, from members of the Synagogue of the Freedmen (as it was called)—Jews of Cyrene and Alexandria as well as the provinces of Cilicia and Asia—who began to argue with Stephen. But they could not stand up against the wisdom the Spirit gave him as he spoke.

There are four words to keep in mind from today’s text (at least four). They reveal a pattern we have already begun to see as the Holy Spirit spreads:

It’s critical to understand the bigger picture here. Were we to get a birds-eye view of the first century church, everywhere we spotted the activity of the Holy Spirit we would also witness the opposition stirring. The same remains true to the present day. We must understand the real enemy is not the Jews or the Freedmen or any other human being. Listen to how the Apostle Paul will later describe the battle.

Finally, be strong in the Lord and in his mighty power.Put on the full armor of God, so that you can take your stand againstthe devil’s schemes. For our struggle is not against flesh and blood, but against the rulers, against the authorities, against the powers of this dark world and against the spiritual forces of evil in the heavenly realms. Ephesians 6:10-12

Human beings must indeed be held accountable when they serve as the willing yet often unwitting agents of darkness, but they are not ultimately responsible. Evil is real and everyone remains susceptible to being drawn into its strategies. While evil is no match for the Holy Spirit, only those who learn to “be strong in the Lord and in his mighty power” have any hope of standing against and overcoming it. The big lesson: as much as people may willingly or unwittingly align themselves with the enemy, people are never the enemy.

This core dynamic of Christian discipleship consists in the crisis and process of learning to be “strong in the Lord and in his mighty power,” who is the Holy Spirit. One more key piece of information: the fullness of the Holy Spirit will always look like Jesus. We simply cannot learn or comprehend how the Holy Spirit works apart from keeping our eyes fixed on Jesus. And this will not happen apart from immersing ourselves in every detail we can grasp from the inspired accounts we have of his life as revealed in the four Gospels.

We are about to witness a case study—a high-def demonstration of how all of this works out in a human life. Prepare to be astonished.

Remember in Luke 12 when Jesus said, “When you are brought before synagogues, rulers and authorities, do not worry about how you will defend yourselves or what you will say, for the Holy Spirit will teach you at that time what you should say.”

Scan our text for the day again. Stephen remembered. Ending where we began today:

But they could not stand up against the wisdom the Spirit gave him as he spoke.

What are the every day implications of knowing that we have an enemy and it is not other people? How does that impact how we deal with other people? What about our enemy?