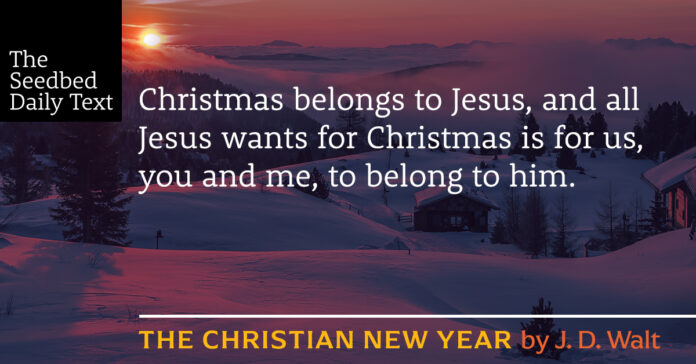 In those days Caesar Augustus issued a decree that a census should be taken of the entire Roman world. (This was the first census that took place while Quirinius was governor of Syria.) And everyone went to their own town to register.

So Joseph also went up from the town of Nazareth in Galilee to Judea, to Bethlehem the town of David, because he belonged to the house and line of David. He went there to register with Mary, who was pledged to be married to him and was expecting a child. While they were there, the time came for the baby to be born, and she gave birth to her firstborn, a son. She wrapped him in cloths and placed him in a manger, because there was no guest room available for them.

And there were shepherds living out in the fields nearby, keeping watch over their flocks at night. An angel of the Lord appeared to them, and the glory of the Lord shone around them, and they were terrified. But the angel said to them, “Do not be afraid. [Behold!] I bring you good news that will cause great joy for all the people. Today in the town of David a Savior has been born to you; he is the Messiah, the Lord. This will be a sign to you: You will find a baby wrapped in cloths and lying in a manger.”

Suddenly a great company of the heavenly host appeared with the angel, praising God and saying,

“Glory to God in the highest heaven,

and on earth peace to those on whom his favor rests.”

When the angels had left them and gone into heaven, the shepherds said to one another, “Let’s go to Bethlehem and see this thing that has happened, which the Lord has told us about.”

So they hurried off and found Mary and Joseph, and the baby, who was lying in the manger. When they had seen him, they spread the word concerning what had been told them about this child, and all who heard it were amazed at what the shepherds said to them. But Mary treasured up all these things and pondered them in her heart.

The shepherds returned, glorifying and praising God for all the things they had heard and seen, which were just as they had been told.

I can’t help but hear this text in the voice of Linus, the brother of Lucy and friend of Charlie Brown, from the late Charles Schultz’s celebrated cartoon strip Peanuts. Linus recites the text as his part in the annual Christmas play in the animated television classic, A Charlie Brown Christmas.

The big story in the Charlie Brown Christmas story is how nothing works out as planned and yet things still go according to plan. There are our plans and then there is always the bigger plan we can’t fully see. Most of the time it takes the interruption of our best-laid plans for the bigger plan to happen.

Linus was known for his security blanket. Though he grew older, he would not let go of his baby blanket. He always carried the blanket and sucked his thumb. The blanket itself became a kind of character throughout all the years of the Peanuts comic strip with all of the other characters developing their own postures (from ambivalent to aggressive) toward it and Linus’s dependency.

We all have security blankets. We are all attached to something or someone. No matter how difficult, delightful, prosperous, or poor our conditions become, we all crave the comfort of predictable lives. For some, the security blanket is a well-funded 401k; for others, it is a daily package of cigarettes or a nightly bottle of wine. For many, security comes in the form of a tangled web of codependent relationships, requiring us to constantly contort ourselves to please one and perform for another. In one way or another, visible or not, most of us carry a security blanket, something to cover ourselves when we feel vulnerable.

It’s what’s so amazing about Christmas Eve. These shepherds, Bedouin farmers, were at the low end of the societal spectrum. They wandered around the countryside scratching out a living for their families from the herd of sheep. They lived out their lives, like the vast majority of everyone else who has ever lived in this world, in the stable insecurity of a predictable poverty. It was to these God first declared the birth of his Son. He went to the ones with the smallest security blanket in order to lead them to a baby wrapped in swaddling clothes and lying in a feeding trough with no security blanket at all.

But the angel said to them, “Do not be afraid. [Behold!] I bring you good news that will cause great joy for all the people. Today in the town of David a Savior has been born to you; he is the Messiah, the Lord.

This is the security that ends all insecurity. This is the covering beyond which any blanket can provide. And this sign, “You will find a baby wrapped in cloths and lying in a manger,” a demonstration of great vulnerability, turns out to be the greatest security. Jesus saves completely, totally, and comprehensively from this first Advent through the final Advent. Nothing is more secure and no one is more protected than when she is wrapped in the life-filled, love-soaked covering of the Lamb of God.

Schultz was a Christian and he wanted the Charlie Brown Christmas special to be about Jesus; after all, the story is about Charlie Brown’s search for the real meaning of the holiday. The television producers balked at the idea. Schultz won in the end by writing into the script this “Christmas play” moment with Linus reciting verbatim the Christmas story from Luke’s Gospel. And, what do you know, he even dropped in a little Easter egg for those with eyes to see. About midway through Linus’s reading, he drops his well-worn security blanket on the floor. Enough said. Christmas belongs to Jesus, and all Jesus wants for Christmas is for us, you and me, to belong to him.

Our Father in heaven, nearer than my breath, thank you for these days of Advent and this new year in Christ. Thank you for the shepherds, likely wrapped in worn-out rags as clothing, and for telling them first. Thank you for showing them the sign of a baby wrapped in swaddling clothes and lying in a manger—the very Savior of the whole world. I confess, I am tired of my endless efforts to stabilize my security. It keeps me in a predictability that counterfeits real life. Come, Holy Spirit, and awaken me to the miracle. Give me the grace to drop the security I cling to, which is really only insecurity. I want to take hold of you this time around, because I know you will never let me go. In the name of Jesus Messiah—the one who came, is here, and is coming again—for his glory and our good, amen.

Where does your security come from? And how does this source reveal your insecurity? How might you let go of the security that is insecurity and take hold of the vulnerable security of Jesus Christ?