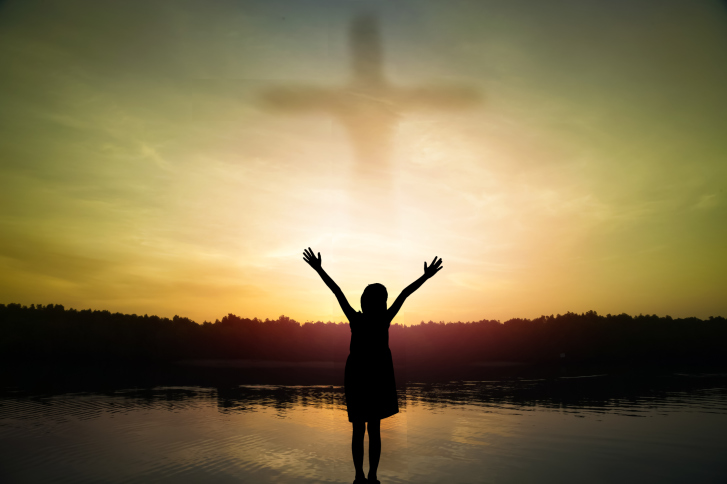 From that time on Jesus began to explain to his disciples that he must go to Jerusalem and suffer many things at the hands of the elders, the chief priests and the teachers of the law, and that he must be killed and on the third day be raised to life. Peter took him aside and began to rebuke him. “Never, Lord!” he said. “This shall never happen to you!” Jesus turned and said to Peter, “Get behind me, Satan! You are a stumbling block to me; you do not have in mind the concerns of God, but merely human concerns.” Then Jesus said to his disciples, “Whoever wants to be my disciple must deny themselves and take up their cross and follow me. For whoever wants to save their life will lose it, but whoever loses their life for me will find it. What good will it be for someone to gain the whole world, yet forfeit their soul? Or what can anyone give in exchange for their soul? For the Son of Man is going to come in his Father’s glory with his angels, and then he will reward everyone according to what they have done. Truly I tell you, some who are standing here will not taste death before they see the Son of Man coming in his kingdom.”—Matthew 16:21–28

Core Truth: Jesus calls his followers to live for his kingdom by offering themselves fully to God and following Jesus into the world on mission.

Following Jesus is a bold calling. Jesus describes the essence of being his disciple in Matthew 16:24. In response to a challenge by Peter, Jesus says, “Whoever wants to be my disciple must deny themselves and take up their cross and follow me.”

Jesus defines discipleship because Peter challenges his mission. In 16:21, Jesus informs his disciples that he will travel to Jerusalem where he will suffer, be killed, and be raised on the third day. This baffled his disciples because it conflicted with their expectations of the Messiah. Peter rebukes Jesus for speaking of suffering and death. In fact, he does it emphatically, “This shall never happen to you!” (v. 22); Jesus responds strongly, “Get behind me, Satan!” (v. 23). Jesus does not mean that the devil has possessed Peter. By his words and desires Peter is aligning himself with evil. For indeed, Jesus’ mission involves laying down his life sacrificially for the world.

The Dangers of Discipleship

According to Jesus, Peter’s problem is his focus on “merely human concerns” rather than “the concerns of God” (v. 23). Peter has lost sight of God’s mission and he values human matters above it. What does this mean? First, focusing on human concerns means valuing security and personal peace over God’s plan. Jesus is going to Jerusalem to suffer and die. Peter prefers to avoid this fate. Later he will deny Jesus rather than risk his life. True security is found in God alone (Matt. 16:27–28). The future of the disciple is secure. Claims of security in this age are an illusion and ultimately a hindrance to living the unbelievable life that God calls us to live on behalf of his kingdom. Second, Peter values a different type of messiah. A crucified messiah is not in Peter’s plans. Death on a cross is shameful. Peter desires a messiah who would triumph through worldly means.

At the heart of Jesus’ call in Matthew 16:24 is a simple truth: live your life as though you were already dead. First, following Jesus involves self-denial. When we talk of self-denial, we reduce it to giving up chocolate or TV for a time. This may be a good spiritual  practice, but it is not radical enough. God wants us to be all in for his kingdom. The word translated “deny” is the same word used to describe Peter’s threefold denial of Jesus. In these cases, Peter is seeking to save himself by denying or renouncing any relationship with Jesus. To deny oneself, then, is renouncing one’s claim to self-preservation.

Second, following Jesus means identifying with the way of the cross. To take up one’s cross is best illustrated when Roman soldiers force Simon of Cyrene (Matt. 27:32) to take up Jesus’ cross and bear it to the place of Jesus’ execution. This shows the literal meaning of the phrase. To “take up one’s cross” is to live as though you were on the final journey of your life. To use a modern phrase, it is to live as a “dead man walking.” Jesus calls his followers to a radical life in which they die to themselves up front and then paradoxically find life. Listen to his words in Matthew 16:25, “For whoever wants to save their life will lose it, but whoever loses their life for me will find it.” Last, once we have embraced the cross, we follow Jesus moment by moment. Where does Jesus lead us? Jesus leads us into the world on mission to announce the good news of the kingdom to those most desperate for it.

Jesus is not calling persons merely to die for a lost cause. It is not about intentional martyrdom. Jesus’ call is radical, but it is rooted in a secure future. Jesus was going to Jerusalem to die, but he anticipated resurrection (16:21). Resurrection would follow suffering and death. We live with the boldness of the dead because our future is absolutely secure. In Matthew 16:27–28, Jesus says, “For the Son of Man is going to come in his Father’s glory with his angels, and then he will reward each person according to what they have done. Truly I tell you, some who are standing here will not taste death before they see the Son of Man coming in his kingdom.”

These verses point to an abundant future. The future is secure so we can live bravely and boldly for Jesus in the present. The way of Jesus Christ is about life in the kingdom (present and future). This is a hope that ought to unleash us to live fully for God in the present.

Jesus’ Call to Us

As we reflect on Jesus’ call to discipleship, we realize that Jesus is calling us to die to ourselves and our self-interests so that we can truly live. We must ask ourselves as individuals: Am I all in for God’s mission? I am to live as one who is carrying my own cross—a person with nothing left to lose. There is great freedom in this. In other words, the focus can no longer be on self at all, but on Jesus Christ. And when we focus on Jesus Christ, we must inevitably face the cross. At the cross, we find the essence of discipleship. At the cross, God invites us to live as a community of the cross. At the cross, God receives us with open arms. We are no longer lost sons and daughters of Adam and Eve. God shapes us into a mosaic of formerly broken pieces that are now renewed and transformed by the cross so that we can offer wholeness, hope, and salvation to a broken world. We join with others to live as a missional community that exists to embody and reflect God’s values and character in/to/for the world.