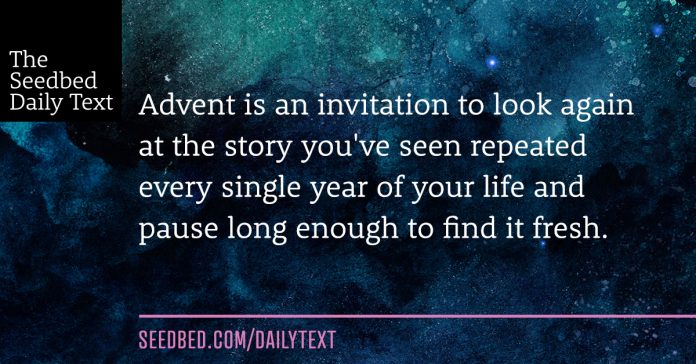 9 The true light that gives light to everyone was coming into the world. 10 He was in the world, and though the world was made through him, the world did not recognize him. 11 He came to that which was his own, but his own did not receive him. 12 Yet to all who did receive him, to those who believed in his name, he gave the right to become children of God— 13 children born not of natural descent, nor of human decision or a husband’s will, but born of God.

Several years ago, Washington Post columnist Gene Weingarten conducted what he called “an experiment in perception.” He set out to answer the question, “in an unexpected setting, at an inconvenient time, would beauty transcend?”

He enlisted the help of world-renowned violin virtuoso Joshua Bell, convincing him to play in a bustling Washington D.C. Metro station during rush hour.  Now, here’s something you need to know: Bell plays a handcrafted 1713 Stradivarius violin, reportedly worth $3.5 million. Just days before, he sold out Boston Symphony Hall, where many of the tickets went for $100 a piece (because you have to pay for that violin somehow).

So there he was, treasured talent, playing his treasured instrument, like a common street performer. Would anyone notice? Would they perceive?

In the 45 minutes that he played that day, with over 1,000 passengers passing by, 27 people paused just long enough to drop a little change in his hat. (Totaling $32.17 You’re not paying for the violin like that.) Seven people stopped for any length of time to take in the beauty of the moment. One person—out of more than 1,000—recognized who he was. In the routine of the everyday, in the rush of the moment, almost everyone failed to perceive.

Advent is an invitation to perceive. Christmas calls us to look again.

Look again at the story you’ve seen repeated every single year of your life and pause long enough to find it fresh.

Look again at Joseph. His reputation trashed in honor of the woman he loves and the God he serves. He will raise the one who will raise the dead. He will teach the Creator how to be a carpenter. He will show God what it means to be a man.

Look again at Mary. From the first moments of this she has been in uncharted waters, and things won’t get any easier from here. Time moves too quickly for any Mom. Even more when your baby is born for a mission like this. But for now she will ponder it all in her heart and cherish every moment.

Look again at the baby. Look close. Take Him in. This is our redemption. This is our seed of hope pushing up through the dirt after a bleak and bitter winter. This is beauty arriving at an inconvenient time and in an unexpected setting as the masses rush by.

This is an invitation to perceive. Christmas calls us to look again. What will you see?

A reminder: We not only look again. We look ahead. Advent is a season when we anticipate the arrival of Christ at Christmas. But it is also a season that calls us to watch for His second arrival, when the true light that gives light to everyone will shatter the darkness and make all things new. May we have eyes to see.

Light of the world, help me to see You and to see the world around me in Light of You.