When Love Goes Out of Bounds - Seedbed
close
Menu 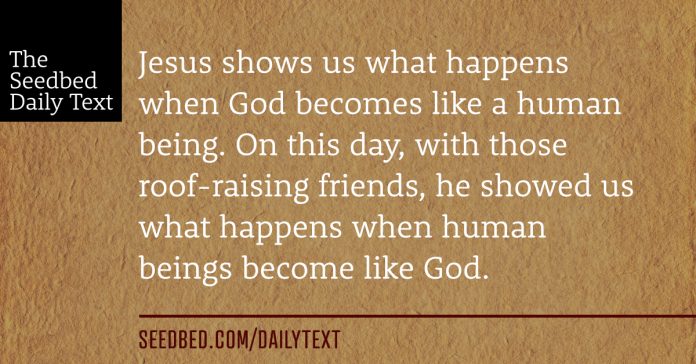 One day Jesus was teaching, and Pharisees and teachers of the law were sitting there. They had come from every village of Galilee and from Judea and Jerusalem. And the power of the Lord was with Jesus to heal the sick. Some men came carrying a paralyzed man on a mat and tried to take him into the house to lay him before Jesus. When they could not find a way to do this because of the crowd, they went up on the roof and lowered him on his mat through the tiles into the middle of the crowd, right in front of Jesus.When Jesus saw their faith, he said, “Friend, your sins are forgiven.”The Pharisees and the teachers of the law began thinking to themselves, “Who is this fellow who speaks blasphemy? Who can forgive sins but God alone?”Jesus knew what they were thinking and asked, “Why are you thinking these things in your hearts? Which is easier: to say, ‘Your sins are forgiven,’ or to say, ‘Get up and walk’?But I want you to know that the Son of Man has authority on earth to forgive sins.” So he said to the paralyzed man, “I tell you, get up, take your mat and go home.” Immediately he stood up in front of them, took what he had been lying on and went home praising God. Everyone was amazed and gave praise to God. They were filled with awe and said, “We have seen remarkable things today.”

I’m still trying to picture the look on their faces when the former leper showed up at the door of their home in time for dinner. Can you imagine the stunned joy up in that house?!

It was bound to happen. Word reached headquarters (a.k.a. Jerusalem) and they sent some representatives out to see what all the fuss was about. Jesus was teaching to a packed house that day. All of a sudden, debris started falling from the ceiling. Streams of sunlight shone through to the room below as a portion of the thatched roof was peeled away by some men on the roof.

I would imagine people were murmuring to one another in the crowded house, “Can you believe the nerve of these guys! What are they thinking! Do they think they are somehow more important than the tons of other people who couldn’t get in? I sure hope he rebukes the heck out of them. They are way out of line.”

The next thing we see is a paralyzed man being lowered down through the hole in the roof and positioned on the floor right in front of Jesus. What on earth was about to happen? How would Jesus respond?

When Jesus saw their faith, he said, “Friend, your sins are forgiven.”

“You see those guys. They heard about me being here today and rather than fight for a seat themselves they actually darted across town, found each other and together went to get their paralytic friend. You all know this man. Surely you’ve seen him day after day after day sitting on his mat out on the side of the street begging for money. Many of you have pitied him with your change and for that I commend you, but these guys on the roof. . . THEY’RE the real deal. When I say faith working itself out in love, that’s what I’m talking about. You see, they didn’t have pity on their paralyzed friend, they loved him right into my presence. They carried this man halfway across town, probably running most of the way, only to find a full house and no way to get inside. Did that stop them? No, love finds a way. In fact, that’s what the faith I’m looking for is. Faith is love finding a way when there is no way. They took a risk. They put the needs of their paralyzed friend way ahead of their own needs. This strategy was not in their best interest for sure. They are going to have to pay for the roof to be fixed. Who does this?! Love does; that’s who. They did the unconventional in order to accomplish the impossible, and because of that I’m going to accomplish the impossible by doing the unconventional.

And yes, it stirred up a hornets nest.

The Pharisees and the teachers of the law began thinking to themselves, “Who is this fellow who speaks blasphemy? Who can forgive sins but God alone?”

Not only had Jesus blown their conventions but he blasted their categories. No one had a category for a human being as God and these religious leaders weren’t about to create one. But just in case, Jesus took it a step further.

But I want you to know that the Son of Man has authority on earth to forgive sins.” So he said to the paralyzed man, “I tell you, get up, take your mat and go home.”

These friends show us the possibility of church; three or four gathering in Jesus name who refuse to leave a broken friend behind.

When faith becomes love, power becomes palpable. You know it when you’ve seen it. It’s something we never quite get over and we can’t stop talking about.

Everyone was amazed and gave praise to God. They were filled with awe and said, “We have seen remarkable things today.”

I’ll meet you tomorrow on the outskirts of town in a wheat field. Look for the flock of geese, I mean Pharisees.

Father God, thank you for this incredible story. I am thankful for it, until I realize I am implicated by it. It has me asking myself, “Whose house am I wrecking in order to get someone to Jesus?” I confess I like to keep it in bounds and play it pretty safe. Expose this variety of so-called love for what it is and lead me into the real thing. In Jesus name, Amen.