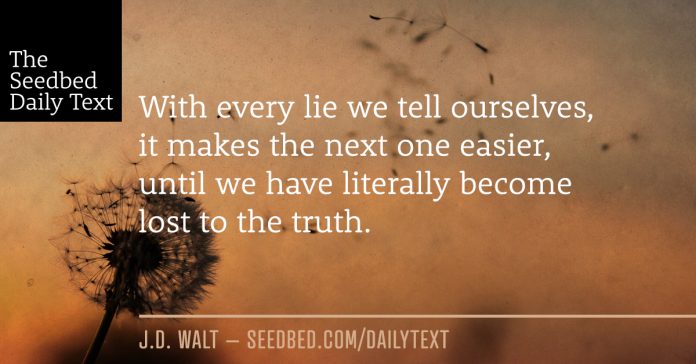 Now a man named Ananias, together with his wife Sapphira, also sold a piece of property. With his wife’s full knowledge he kept back part of the money for himself, but brought the rest and put it at the apostles’ feet.Then Peter said, “Ananias, how is it that Satan has so filled your heart that you have lied to the Holy Spirit and have kept for yourself some of the money you received for the land? Didn’t it belong to you before it was sold? And after it was sold, wasn’t the money at your disposal? What made you think of doing such a thing? You have not lied just to human beings but to God.”When Ananias heard this, he fell down and died. And great fear seized all who heard what had happened. Then some young men came forward, wrapped up his body, and carried him out and buried him.About three hours later his wife came in, not knowing what had happened. Peter asked her, “Tell me, is this the price you and Ananias got for the land?”“Yes,” she said, “that is the price.”Peter said to her, “How could you conspire to test the Spirit of the Lord? Listen! The feet of the men who buried your husband are at the door, and they will carry you out also.”At that moment she fell down at his feet and died. Then the young men came in and, finding her dead, carried her out and buried her beside her husband. Great fear seized the whole church and all who heard about these events.

This is a tough story. This couple actually sold a piece of land in the interest of serving the growing church and helping the people of God. That’s a big deal and very commendable. He kept back some of the money for his own family. That seems like a small deal and perfectly acceptable. And they drop dead on being confronted about this? Seems like overkill; no pun intended. It seems to fall in the category of “no good deed goes unpunished.”

But this story is not about money or giving or any of that. This story is about lying. Nothing destroys a person, a relationship, a community or church, faster than lying. We must commend Ananias and Sapphira for their generous spirit in selling this land and making such a profound gift to God through the church. We can never excuse their lie, because truth be told, to the extent we excuse them we excuse ourselves.

This story reveals the nature of a particular kind of lie. Ananias and Sapphira did not tell a bold-faced lie here. Yes, they misrepresented themselves, but it was by omission. They didn’t say anything untrue. They allowed an untruth to stand.

Their dramatic act of dropping dead startles us, but note, it does not say the Holy Spirit struck them down. No, they did it to themselves. Every time we lie to another person, no matter how small or justified or harmless it may seem, we put another nail in our own coffin. It deeply damages the person lied to, but the deepest damage of a lie is to the one propagating it. Anytime we lie to another person, we must first lie to ourselves. With every lie we tell ourselves, it makes the next one easier, until we have literally become lost to the truth. The most horrifying reality of lying is the way the liar develops such an immunity to lying, they eventually have no idea that they are doing it.

Growing up, my parents taught me many things, but one thing stands out for which I am eternally grateful. I can hear their voices now,

“No matter what, always tell the truth.”

The twenty-first century lesson of Ananias and Sapphira (and every century since) is precisely this one: Unswerving, unwavering, uncompromising honesty. In the smallest matters and the greatest concerns, always tell the truth, no matter what.

The good news? Because of the Holy Spirit, telling the truth is always within reach. The biggest liar, by telling the smallest truth, can start a brand new life.

Do not lie to each other, since you have taken off your old self with its practices and have put on the new self, which is being renewed in knowledge in the image of its Creator. (Colossians 3:9-10)

How does lying destroy other people? How does it destroy the one who lies? Any experience with this?