The Difference Between Power-Down Authority and Lifted-Up Authority.
close
Menu

5 When Jesus had entered Capernaum, a centurion came to him, asking for help. 6 “Lord,” he said, “my servant lies at home paralyzed, suffering terribly.”

8 The centurion replied, “Lord, I do not deserve to have you come under my roof. But just say the word, and my servant will be healed. 9 For I myself am a man under authority, with soldiers under me. I tell this one, ‘Go,’ and he goes; and that one, ‘Come,’ and he comes. I say to my servant, ‘Do this,’ and he does it.”

10 When Jesus heard this, he was amazed and said to those following him, “Truly I tell you, I have not found anyone in Israel with such great faith. 11 I say to you that many will come from the east and the west, and will take their places at the feast with Abraham, Isaac and Jacob in the kingdom of heaven. 12 But the subjects of the kingdom will be thrown outside, into the darkness, where there will be weeping and gnashing of teeth.”

13 Then Jesus said to the centurion, “Go! Let it be done just as you believed it would.” And his servant was healed at that moment.

Jesus has just come down from the mountain where he has given this new law of the Kingdom of God. Now he returns to the valley of life where this new law can work itself out into a new order—yes, even a New Creation.

I think I’m hearing an echo here. Remember Moses going up to Mt. Sinai to receive the Law from God? Afterward he descended into the valley where the Word of God was worked into the reality of the people of God.

When the Word of God gets worked out in the people of God by the power of the Spirit of God we get something entirely new. It’s called the Kingdom of God on Earth as it is in Heaven. This text is about authority—not power-down authority but lifted up authority—Kingdom authority. The authority of the Kingdom of God “flows from his throne unto his own,” as the great hymn sings.

The Kingdom of God on Earth as it is in Heaven reverses the impacts and effects of the curse of sin and death by the power of the supernatural love of God. That’s what these ten miracles we are in the midst of are all about. They aren’t random acts of kindness. My friend, Matt LeRoy, calls them “intentional movements of grace.”

The Centurion knows how authority works. He says, “Jump!” His servants say, “How high?”

Authority works by speaking words backed up by power. It’s the nature of Jesus’ authority that is so radically different. He is Lord yet he doesn’t “Lord over people.” He lifts them up. He loves them. This is the nature of true Lordship. The nature of Kingdom authority is the supernatural love of God–who has all authority.

Then Jesus said to the centurion, “Go! Let it be done just as you believed it would.” And his servant was healed at that moment.

We will soon see his intention to share this authority with his people. This is precisely what discipleship is all about—being taught and trained to work for the good of the world in the authority of Jesus Christ. 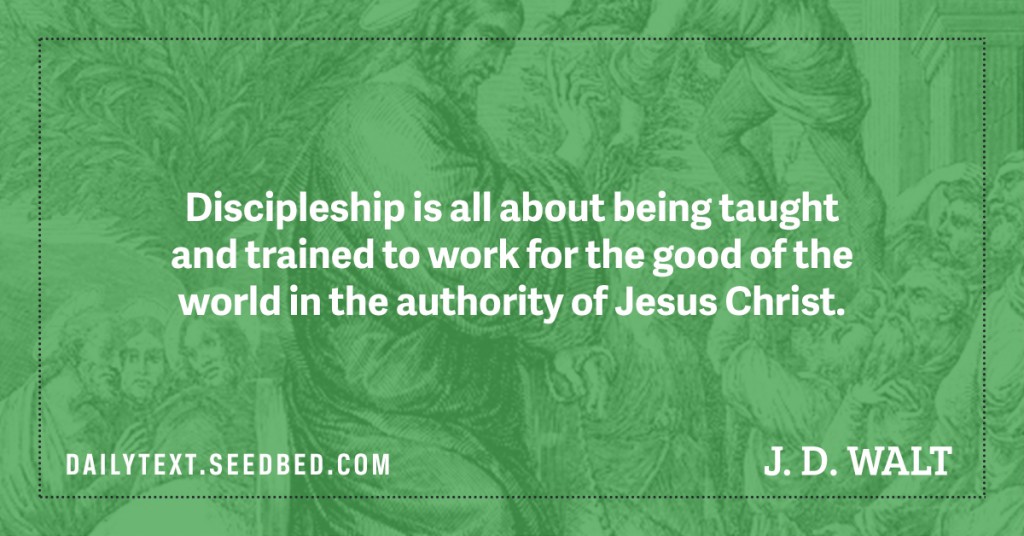 2. Think and reflect on what the exercise of Kingdom authority might look like in your every day life.

3. Can you think of ordinary people you know who possess and demonstrate this kind of authority?
—————-