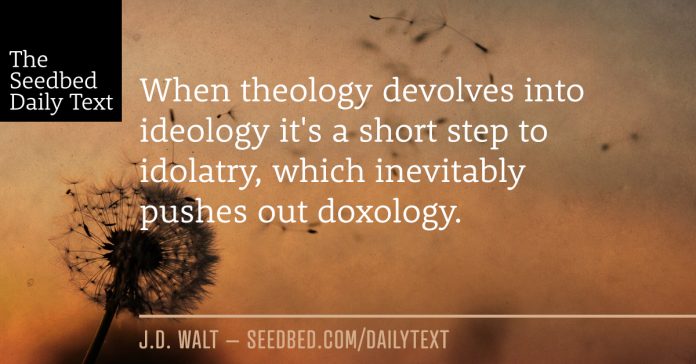 6 Then Paul, knowing that some of them were Sadducees and the others Pharisees, called out in the Sanhedrin, “My brothers, I am a Pharisee, descended from Pharisees. I stand on trial because of the hope of the resurrection of the dead.” 7 When he said this, a dispute broke out between the Pharisees and the Sadducees, and the assembly was divided. 8 (The Sadducees say that there is no resurrection, and that there are neither angels nor spirits, but the Pharisees believe all these things.)

9 There was a great uproar, and some of the teachers of the law who were Pharisees stood up and argued vigorously. “We find nothing wrong with this man,” they said. “What if a spirit or an angel has spoken to him?” 10 The dispute became so violent that the commander was afraid Paul would be torn to pieces by them. He ordered the troops to go down and take him away from them by force and bring him into the barracks.

There are at least two ways to think through what happened in today’s text.

On the one hand, it looks like Paul pulled a trick play right out of the playbook of Sun Tzu. A common enemy produces allies, but if the allies can be turned against one another the focus on the common enemy is lost. And if the alliance can be broken by appealing to a deeper bond  between the common enemy and one of the allies, all the better. You’ve heard the saying, “My enemy’s enemy is my friend.”

I’m not sure why, other than a pre-Machiavellian experiment for effect, Paul did this. He essentially lobbed  a theological grenade into their midst with this announcement, “Brothers, I am a Pharisee, a son of Pharisees. I am on trial concerning the hope of the resurrection of the dead.” You’ve heard the saying, “Politics makes strange bedfellows”? That’s what we see here. Some of the leaders of the Pharisees, the ones trying to kill Paul, actually took Paul’s defense. In the end, though, it didn’t work. Rather than getting the attention off of himself, Paul had to be forcibly removed by the soldiers to keep him from being literally torn to pieces. He became the proverbial rope in their game of ideological tug of war.

This is our first sign that the conflict is far more ideological than theological in nature. Do you remember the day when avowed enemies, Herod and Pilate, shook hands in a common alliance against Jesus? That’s the problem with so many religious disputes. They are often just power battles clothed in theological garb. When theology devolves into ideology it’s a short step to idolatry, which inevitably pushes out doxology. The power of the gospel, by its very nature as the power of God, threatened to undermine and undo the power of the Pharisees and the Sadducees.

This kind of thing continues to happen in the Church among the people of God to this very day. In our efforts to fight what we consider to be false ideologies with good theology we usually wind up becoming ideologues ourselves and the whole thing becomes about power and winning. We tend to slaughter our opponents not so much with weaponry as with our words; and yes, it still happens in the name of “God.”

It brings me to the second way to think through what happened in today’s text?

What would have happened if instead of throwing the pipe bomb, Paul had bowed to his knees and simply proclaimed, “Jesus is Lord.”

True theology (words about God) is inherently political without being ideological because true theology is profoundly personal and relational. To say Jesus is Lord is not triumphalistic. It is the humble truth that alone saves the world. To declare, “Jesus is Lord,” is the only true doxology and the sole antidote to idolatry.

This is yet another reason why the name of Jesus is the only name under heaven by which people may be saved.

The way to remain theological and not ideological is to become more christological, which at very minimum means becoming more humble (and wherever possible remove the suffixes “-ology” and “-ological” from most of our speech).

The answer is comprehensive, totalizing, humble, and confoundingly absurd to the world. And yet it is the truest truth in all the Cosmos: Jesus Christ is Lord. And in the end, it will be on every tongue.