Method Acting vs. Role Play and the Call to Discipleship - Seedbed
close
Menu 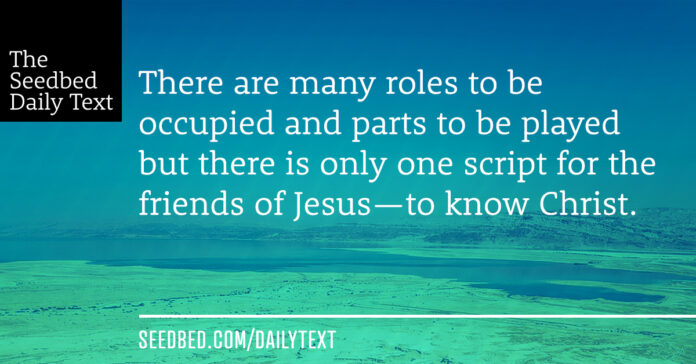 19 Meanwhile, the high priest questioned Jesus about his disciples and his teaching.

20 “I have spoken openly to the world,” Jesus replied. “I always taught in synagogues or at the temple, where all the Jews come together. I said nothing in secret. 21 Why question me? Ask those who heard me. Surely they know what I said.”

22 When Jesus said this, one of the officials nearby slapped him in the face. “Is this the way you answer the high priest?” he demanded.

23 “If I said something wrong,” Jesus replied, “testify as to what is wrong. But if I spoke the truth, why did you strike me?” 24 Then Annas sent him bound to Caiaphas the high priest.

25 Meanwhile, Simon Peter was still standing there warming himself. So they asked him, “You aren’t one of his disciples too, are you?”

26 One of the high priest’s servants, a relative of the man whose ear Peter had cut off, challenged him, “Didn’t I see you with him in the garden?” 27 Again Peter denied it, and at that moment a rooster began to crow.

Let’s begin today where we ended yesterday, with Paul’s declaration of intent.

I want to know Christ and the power of his resurrection, and the fellowship of sharing in his sufferings, becoming like him in his death, and so somehow attaining to the resurrection from the dead.” (Philippians 3:10-11)

There are many roles to be occupied and parts to be played but there is only one script for the friends of Jesus. Paul captures it in his declaration, “I want to know Christ.”

While the world around us plays its various parts, the friends of Jesus are not role playing at all. They are method actors. Method acting is not about role playing but identity formation. The method actor literally takes on the identity of the character. Reminiscent of Paul’s exhortation to “have the same mind in you that was in Christ Jesus,” (see Philippians 2) method actors take on the mind of the character they are playing. As we continue this slow walk to the Cross with Jesus, let’s dwell together in this declaration until we have made it our own.

“I want to know Christ and the power of his resurrection, and the fellowship of sharing in his sufferings, becoming like him in his death, and so somehow attaining to the resurrection from the dead.” (Philippians 3:10-11)

Abba Father, thank you for your son, Jesus, who disciples us until we share in his very character. Shatter the thin role playing exercises we have settled for and mistaken as our faith. Take us deep into the fellowship of his sufferings. Lead us to become like him in his death, that we might truly live. We pray in Jesus’ name. Amen.

1. What do you think of this concept of method acting as a model for discipleship?

2. What might it mean for you to become like Jesus in his death at this point in your life? Where is that place of struggle right now?

3. Are you working to “rememberize” Paul’s declaration of intent? Dwell on it. Immerse yourself in it.

Today, and every Wednesday at noon central time, we gather on a global Zoom call to sow together for a great awakening in prayer. It is powerful. Would you join us today? ZOOM LINK HERE.