21 “Brother will betray brother to death, and a father his child; children will rebel against their parents and have them put to death. 22 You will be hated by everyone because of me, but the one who stands firm to the end will be saved. 23 When you are persecuted in one place, flee to another. Truly I tell you, you will not finish going through the towns of Israel before the Son of Man comes.

24 “The student is not above the teacher, nor a servant above his master. 25 It is enough for students to be like their teachers, and servants like their masters. If the head of the house has been called Beelzebul, how much more the members of his household!

26 “So do not be afraid of them, for there is nothing concealed that will not be disclosed, or hidden that will not be made known. 27 What I tell you in the dark, speak in the daylight; what is whispered in your ear, proclaim from the roofs. 28 Do not be afraid of those who kill the body but cannot kill the soul. Rather, be afraid of the One who can destroy both soul and body in hell. 29 Are not two sparrows sold for a penny? Yet not one of them will fall to the ground outside your Father’s care. 30 And even the very hairs of your head are all numbered. 31 So don’t be afraid; you are worth more than many sparrows.

It’s time to deal with the elephant in the room. In this discourse, as in later ones, Jesus clearly references events that point to the end of the age. The challenge is he does so to a group of disciples going out on short term mission trips. Did Jesus believe the end of the age was at the doorstep, so to speak? Did he really think the end of all things could come at any moment? Many have disregarded Jesus and discarded his teachings because they have misunderstood such texts as these. They have mistakenly put Jesus in the “Chicken Little” category; noting that Jesus’ prophecy of the end of the world not only did not come when he said it would—it still hasn’t come.  Others have associated these warnings with the Roman invasion which would come in another forty years or so.

O.K., so what is my take? We must realize that most everything Jesus said was spoken not only to his immediate hearers but to hearers in every subsequent generation, right up to the very end. Jesus trains his disciples, then and now, in a unique way of being prepared. That’s how this entire discourse rings; from traveling light to the message of the nearness of the Kingdom of Heaven to complete and utter reliance on the Holy Spirit and so on. He teaches them and us to expect and not be surprised by calamities and at the same time to live in a state of expectation and readiness for the ultimate cataclysm. Calamities will happen, but they need not be dreaded because Jesus would be with them. At a certain point somewhere in the future—not even known by Jesus while he was on Earth—a string of calamities would come which would usher in the final cataclysm and inaugurate the final consummation of the Kingdom of God on Earth as it is in heaven.

His message to them and us in all of this? Be ready. Don’t be anxious or afraid, and for God’s sake don’t be prophets of doom. Proclaim the Kingdom with declaration and demonstration. Show the people the glorious signs of what is to come: blind eyes seeing, deaf ears hearing, lame legs walking, lepers skin healing, and yes, even dead bodies rising.

To be a disciple of Jesus means to be an agent of the now near Kingdom of God. It means exercising the audacious authority to do both ordinary and glorious things in small ways and in particular places in ways revealing what will ultimately happen in large ways in all places.

A final word. To be a disciple of Jesus means we cannot be afraid of terrorism and terrorists. There’s nothing new about it. We cannot let the world’s anxiety dictate our response. These are horrible calamities to be sure. We do not fight it by contributing to the fear but by churning up the faith. 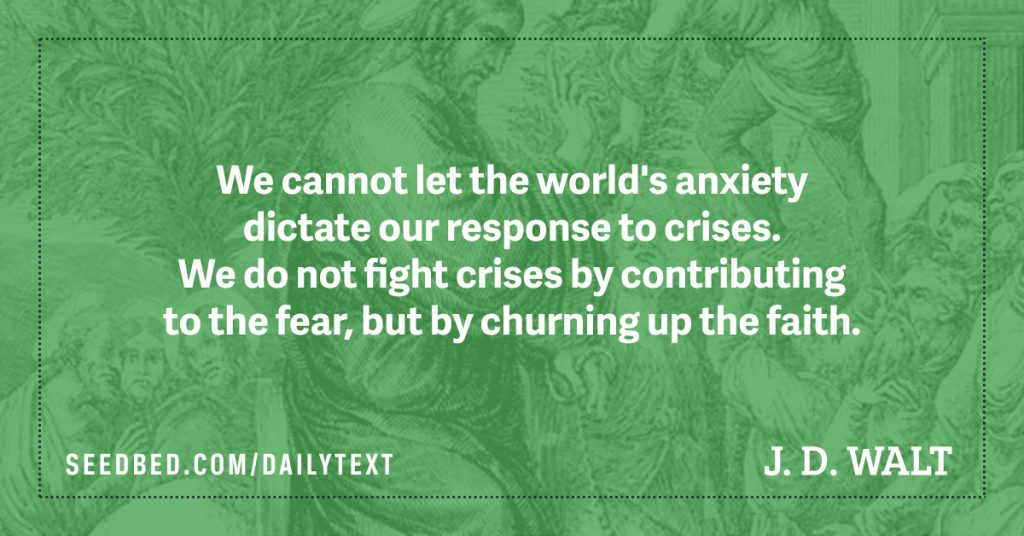 1. So what do you think about this way of understanding Jesus teaching about calamities and cataclysm and how we must be prepared for both at all times.

2. How are you responding to the particular calamities of our age and particularly as they are aimed as an assault against the followers of Jesus? Are you leaning back on your heels and caught dumbfounded like everyone else around? Are you persuaded by the rhetoric and proposed retaliations of the age? Or are you leaning forward in faith with an unsurprised disposition and ready to rise up into the response of the now near Kingdom of Heaven?

3. And how are you responding to the reality of the future consummation of the Kingdom of Heaven? Are you prepared for that; even if you aren’t quite ready for it to happen? What would it look like to be a person who welcomes all the glorious future while urgently welcoming others to be prepared for it?