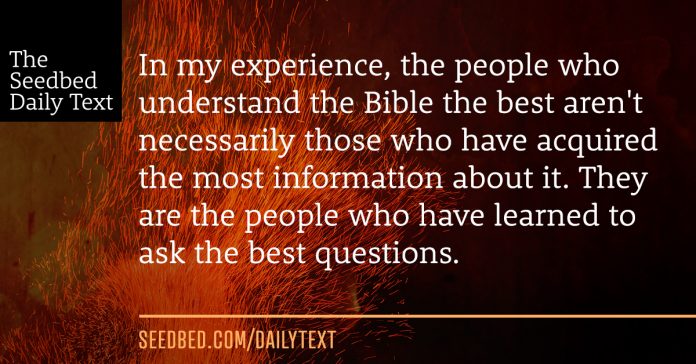 35 While Jesus was teaching in the temple courts, he asked, “Why do the teachers of the law say that the Messiah is the son of David? 36 David himself, speaking by the Holy Spirit,declared:

“‘The Lord said to my Lord:
“Sit at my right hand
until I put your enemies
under your feet.”’

The large crowd listened to him with delight.

38 As he taught, Jesus said, “Watch out for the teachers of the law. They like to walk around in flowing robes and be greeted with respect in the marketplaces, 39 and have the most important seats in the synagogues and the places of honor at banquets. 40 They devour widows’ houses and for a show make lengthy prayers. These men will be punished most severely.”

I recently sat at one of those long tables found in some Starbucks coffee shops; one of those kind where different people come and go. Some sit at the table and mind their own business. Others come with a friend or two and sit across from each other and visit. Still others will strike up a conversation with complete strangers who are also sitting at the table. It’s a curious social convention.

On my recent visit two men came and took seats across from each other just down the table from me. They were close enough where I could listen in without much difficulty. It became obvious that one of the men was mentoring the other in the Christian faith. They both had their bibles opened on the table. The discussion quickly turned to monologue as the older man proceeded to “teach” the younger man for an almost thirty minute stretch. He talked “at” him. I observed as the younger man tried to interject with his questions to no avail. It proved to be a discipleship adventure in missing the point.

One of the things I appreciate about today’s text has to do with just this point. Jesus was in a teaching mode in the Temple. Around him were a number of people who recognized his authority. Jesus, of course, was an “expert” on the texts he was teaching on. He knew precisely what they meant. However, two small words stand out in the text which show both his respect for people and the humility of his discipleship craft. See if you can pick out the two words.

While Jesus was teaching in the temple courts, he asked, “Why do the teachers of the law say that the Messiah is the son of David?

Did you spot them? The two words are, “he asked.” Did he ask because he didn’t know? Of course not. My take? I think he asked because it was a challenging conundrum. Put in my own context it would be like asking how my own son could be my God. Often when I know the answer to a difficult question I like to demonstrate my expertise in preemptively answering. I prefer the ease of what I call the “download” method. It’s what that man next to me at Starbucks was doing. He downloaded a ton of biblical content onto his mentee. The “download” method tends to be an informational approach.

The process of making disciples of Jesus Christ requires a conversational ethic rather than an informational approach. We communicate “with” others rather than talking “to” them or worse, “at” them. It’s never occurred to me but at the core of the word communicate is the word “commune.” When we “commune” with another person it’s about a lot more than passing on information. It implies a rich dimension of sharing in a context of humble fellowship. It’s a participation in mutual exploration. It’s got me thinking. I don’t want to be “The Bible Answer Guy,” even if I have some answers. I want to learn to ask good questions. In fact, I try to do this every day at the close of the Daily Text.

I know today’s text likely didn’t intend to make the point I’m making. Admittedly, it’s a tangential observation. The text is all about Jesus trying to help his followers understand that his agenda could not be framed from a mere human oriented approach to national sovereignty (i.e restoring the Davidic throne). Jesus was not bringing a “geopolitical” solution but an eternal kingdom. You just can’t download that on people. It has to be revealed to them. Asking questions causes people to lean into a conversation rather than away. It opens them up to receive revelation.

Spirit of the Living God, fall afresh on me. Lord Jesus, it’s a marvel to think of how you, who so perfectly embody the answer, ask questions. Teach me your way of loving curiosity in other people. Save me from needing to have the answers. Train me in the be humble way of inquiring—especially when I think I already know. MElt me. Mold me. Fill me. Use me. For the glory of your name, Jesus. Amen.