My Pilgrimage to the New Room - Seedbed
close
Menu 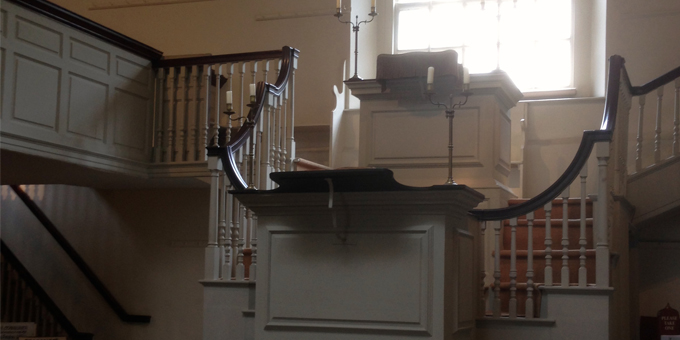 In my childhood and adolescence the Christianity with which I was accustom was Pentecostalism. In my early twenties I began to venture away from Pentecostal doctrine and practice in search of an understanding of the Gospel that I could embrace as my own. I have dabbled in this tradition and that tradition only to find myself being influenced greatly by men who though not Pentecostal (Pentecostalism did not yet exist in their life time) had been presented to me from a positive angle by Pentecostals: John and Charles Wesley.

Now, in my early thirties, I find myself making a home in the Methodist Church, in the Wesleyan tradition, realizing that many of the positive elements of Pentecostalism that I admire to this day are due, in part, to Wesleyanism so that now it seems as if the Wesleys has been mentors all this time.

In June of this year I spent a couple weeks in Bristol, England, because I am doing my doctoral work through the University of Bristol/Trinity College Bristol. One day I had some spare time and I had learned that the oldest “Methodist building” in the world was located in Bristol. It is called “the New Room” and according to the website maintained by the chapel’s caretakers,

“John Wesley came to Bristol in 1739 at the invitation of George Whitefield, who asked him to take over his work of preaching to the open air crowds which he had gathered. Wesley preached his first open air sermon in this country on April 2nd in a Brickfield in St. Philip’s Marsh and continued this work later at Hanham Mount and several other places. Religious Societies in Bristol then increased in size, and on May 9th Wesley bought the land and on May 12th laid the foundation stone of what he called ‘our New Room in the Horsefair’, which was built as a place to expound the Scriptures to the Societies. It is thus the first Methodist building in the world.” [1]

According to Ralph Waller, Wesley resisted accepting Whitefield’s invitation, even though Whitefield had already been promoting and announcing his coming to the people of Bristol. Wesley’s health was subpar at the time, yet he found the strength to go.[2] There was much anti-Methodist resistance with people accusing worshippers of falling into “strange fits” (something Pentecostals will recognize from stories of the Azusa Street Revival) along with other anti-ecclesial activities such as “theological irregularity, preaching in other’s perishes, administrating the sacraments in societies” and more.[3] In spite of this, or maybe because of it, the revivals made a great impact on Bristol and the New Room stands as a testimony to that work of the Spirit.

The current state of the Church has caused many to fret over her future. What will become of Christianity in North America and Europe? Can we hope for revival? As I walked through the old pews, up the stairs into the balcony, even further up to what is now called “the Preacher’s Room” where you’ll find the Wesley’s living quarters, and then back down to the pulpit, I realized that the Church has never been free of crisis. We live in the tension of being a missionary people to the world while not conforming to its values and sometimes this makes things uncomfortable (or, as our brother and sisters in places like Iraq know, life-threatening), yet God has sustained the Church and God has raised up the right people for the right time.

As I chatted with the few elderly people who curate the chapel I saw the joy in their eyes as they passed along stories about the John and Charles, about their mother Susanna, and about early Methodists such as Adam Clarke and Francis Asbury. It is our stories about the past—about weathering the struggles and how the Church arose victorious to proclaim the Gospel another day—that remind us that the same Spirit that guided them now leads us into the future and we exist in this time and this place to be a witness to our generation. May we do for today what the early Methodists did for theirs, maybe not leaving behind a chapel, but surely leaving behind a legacy to strengthen those who will tell our stories.[4]

[1] This paragraph comes from the webpage “The History” located at http://www.newroombristol.org.uk/History, accessed 9 August 2014.

[4] For more pictures and information about the New Room visit http://www.newroombristol.org.uk.

Register for New Room Conference before August 16th for the current rate.

© Seedbed 2021
My Pilgrimage to the New Room
MORE STORIES