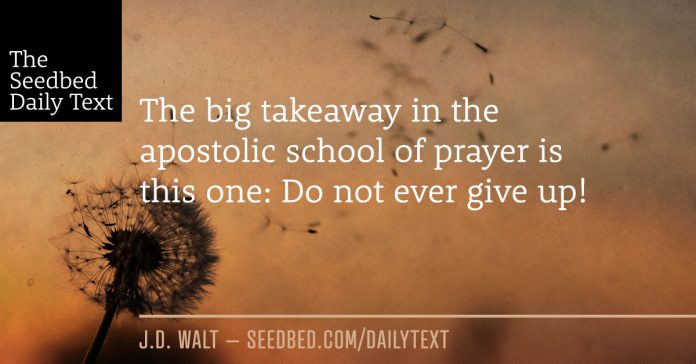 So Peter was kept in prison, but the church was earnestly praying to God for him.The night before Herod was to bring him to trial, Peter was sleeping between two soldiers, bound with two chains, and sentries stood guard at the entrance. Suddenly an angel of the Lord appeared and a light shone in the cell. He struck Peter on the side and woke him up. “Quick, get up!” he said, and the chains fell off Peter’s wrists.Then the angel said to him, “Put on your clothes and sandals.” And Peter did so. “Wrap your cloak around you and follow me,” the angel told him. Peter followed him out of the prison, but he had no idea that what the angel was doing was really happening; he thought he was seeing a vision. They passed the first and second guards and came to the iron gate leading to the city. It opened for them by itself, and they went through it. When they had walked the length of one street, suddenly the angel left him.Then Peter came to himself and said, “Now I know without a doubt that the Lord has sent his angel and rescued me from Herod’s clutches and from everything the Jewish people were hoping would happen.”

But then we compare our own impossible scenarios and the failure of our own prayers in the face of them. We face situations like terminal cancer with grandiose expectations and when our prayers are not answered the pendulum swings back to “What’s the point?”

No one ever points out the unanswered prayer of deliverance for James. Don’t you know the church prayed just as hard for James as they did Peter? The big takeaway in the Apostolic school of prayer is this one: Do not ever give up! Ever! Just because we lose badly on one of battle front does not mean we should give up on the other ones. Sometimes it will feel like God is not home. Other times it will feel like he does not care. Faith is unwavering confidence in God no matter what.

Something tells me the Holy Spirit reminded the church of this word from Jesus as they faced this, their worst crisis so far.

Listen to Luther in v. 3 of his most famous hymn.

And though this world, with devils filled, should threaten to undo us,
We will not fear, for God hath willed His truth to triumph through us:
The Prince of Darkness grim, we tremble not for him;
His rage we can endure, for lo, his doom is sure,
One little word shall fell him.

The church must cling to and shout and sing and declare and never let go of that most powerful little word: Jesus!

No matter what you are facing today. Put your hope in God. Do not give up. Even if you lose the present battle, do not give up. James may fall, but Peter is still depending on your prayers. Keep on keeping on! And never forget verse 4:

That word above all earthly powers, no thanks to them, abideth;
The Spirit and the gifts are ours through Him Who with us sideth:
Let goods and kindred go, this mortal life also;
The body they may kill: God’s truth abideth still,
His kingdom is forever.

Who do you know today who is facing a hard loss, engaging an impossible situation, needing your prayers and encouragement? How will you respond to them today?