Why There is No Such Thing as "Secular" - Seedbed
close
Menu 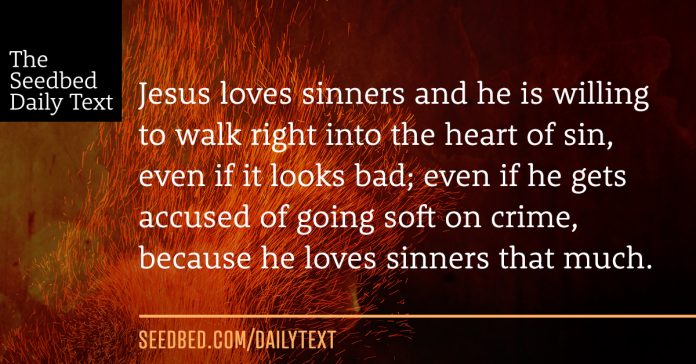 Once again Jesus went out beside the lake. A large crowd came to him, and he began to teach them. As he walked along, he saw Levi son of Alphaeus sitting at the tax collector’s booth. “Follow me,” Jesus told him, and Levi got up and followed him.

On hearing this, Jesus said to them, “It is not the healthy who need a doctor, but the sick. I have not come to call the righteous, but sinners.”

26. The ministry of the Holy Spirit collapses the compartmentalized categories of sacred and secular, church and world, sanctuary and streets. Jesus does the overwhelming majority of his work right in the middle of the every day world—where everybody else is doing their every day work. The Holy Spirit doesn’t seem to be in search of religious facilities. Jesus spends his days next to the Sea of Galilee, in the host of towns and villages around the Sea, in the homes of tax collectors, sinners and friends. By comparison he goes to the synagogue once a week and hardly ever visits the Big House, a.k.a. “The Temple.”

27. Jesus constantly shows us what it looks like when the Holy Spirit works through a human person to enter desecrated places and restore their sacred character. It reminds me of a line in one of my favorite Wendell Berry poems, titled, “How to be a Poet“:

In today’s text we see Jesus in the home of a tax collector seated around the table with a crowd of notorious sinners. It looks to the religious authorities that he is affirming sin. It makes no sense to them.

When the teachers of the law who were Pharisees saw him eating with the sinners and tax collectors, they asked his disciples: “Why does he eat with tax collectors and sinners?”

The truth? Jesus hates sin because sin desecrates all He has created. He loves sinners and he is willing to walk right into the heart of sin, even if it looks bad; even if he gets accused of going soft on crime, because he loves sinners that much. He doesn’t care what it looks like. In fact, he is willing risk being misunderstood as affirming sin in order to carry out his mission of restoring desecrated sinners into the sacred sons and daughters of God.

I think this is the kind of risk taking he’s looking for from his followers. The Holy Spirit is always ready to empower those risk takers. Yes, they will often pay a price, but those are the ones Jesus will be high living in the end.

Spirit of the living God, fall afresh on me. Thank you that with Jesus there is no secular and sacred; only sacred and desecrated. Give me courage to stand  with the broken in desecrated places and believe for the sacred working of the Spirit. Forgive my worrying about myself becoming unclean. As Jesus is, so I will be. Melt me. Mold me. Fill me. Use me. For the glory of your name, Jesus. Amen.

How much have you permitted the world around us to draw lines separating the secular and the sacred in your way of seeing people and things? How might you un-draw those lines?