Not for Ourselves, But for Others: The Great Rule of the Kingdom
close
Menu 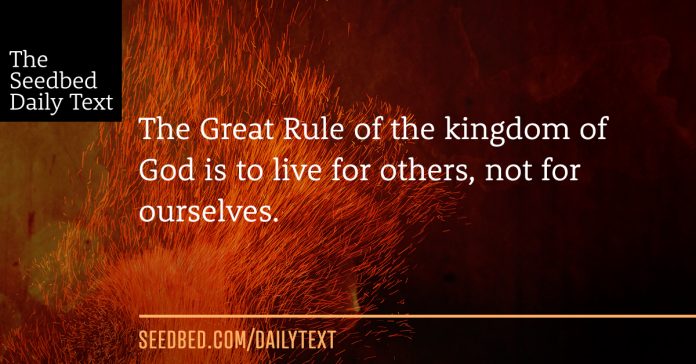 21 He said to them, “Do you bring in a lamp to put it under a bowl or a bed? Instead, don’t you put it on its stand? 22 For whatever is hidden is meant to be disclosed, and whatever is concealed is meant to be brought out into the open. 23 If anyone has ears to hear, let them hear.”

24 “Consider carefully what you hear,” he continued. “With the measure you use, it will be measured to you—and even more. 25 Whoever has will be given more; whoever does not have, even what they have will be taken from them.”

Just as many of you read the Daily Text faithfully each week, I also have certain writings I regularly read to encourage my growth in the grace of God. I often read the daily writings of Dr. Gary Hoag, a.k.a., “The Generosity Monk,” a close friend and co-laborer in the work of the gospel. Some time ago he posted a quote I think powerfully captures the ideas at work in today’s text. The quote comes from Edward Payson:

“Not for ourselves, but others is the grand law of nature, inscribed by the hand of God on every part of creation. Not for itself, but others, does the sun dispense its beams; not for themselves, but others, do the clouds distil their showers; not for herself, but others, does the earth unlock her treasures; not for themselves, but others, do the trees produce their fruits, or the flowers diffuse their fragrance and display their various hues. So, not for himself, but others, are the blessings of Heaven bestowed on man.And whenever, instead of diffusing them around, he devotes them exclusively to his own gratification, and shuts himself up in the dark and flinty caverns of selfishness, he transgresses the great law of creation. He cuts himself off from the created universe, and its Author. He sacrilegiously converts to his own use the favors which were given him for the relief of others, and must be considered, not only as an unprofitable, but as a fraudulent servant, who has worse than wasted his Lord’s money. He, who thus lives only to himself, and consumes the bounty of Heaven upon his lusts, or consecrates it to the demon of avarice, is a barren rock in a fertile plain; he is a thorny bramble in a fruitful vineyard; he is the grave of God’s blessings.”

Gary comes up with this kind of gold almost every single day. Because this particular reading spoke powerfully to me concerning today’s text and because I also want to be faithful to “put the lamp on the stand,” I wanted to share his work with you and encourage you to follow Gary also. You can learn more here.

Spirit of the Living God, fall afresh on me. Not for myself but for others. I confess as much as I want to live this way through and through, I run into my selfishness so often. Set me free from myself that I might be free to truly love others. Melt me. Mold me. Fill me. Use me. For the glory of your name, Jesus. Amen.

Have you found all the ways you can serve others but still be serving yourself? What about that?

© Seedbed 2021
Not for Ourselves, But for Others: The Great Rule of the Kingdom
MORE STORIES