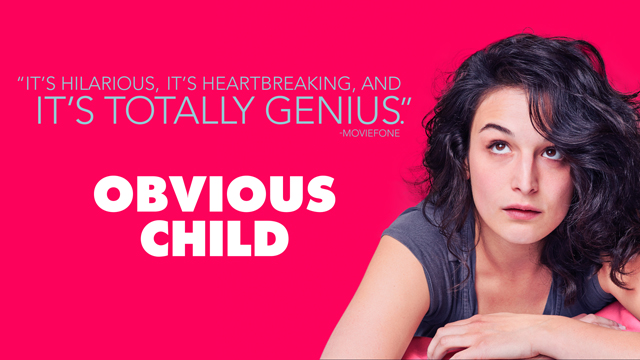 Obvious Child, a movie about an aspiring comedian with an unwanted pregnancy, lays bare the logic behind abortion. Philip Tallon offers a review which picks up on the pro-abortion political perspective of the movie, while suggesting that there is at least a subtle awareness of the dark implications of this position.

If you know only one thing about Obvious Child, it’s this: it’s a romantic comedy that centers on the main character’s abortion. If you know only one thing about Jenny Slate, the star of Obvious Child, it’s this: she accidentally dropped the F-word during her debut appearance on SNL and was fired at the end of that season. If you would never look up that clip on Youtube because of its obscene content do not see this movie. Obvious Child is a crude-but-touching indie-comedy reminiscent in tone and content of many of Judd Apatow’s recent coming-of-age comedies. Slate plays Donna, an amateur comedian who does shockingly honest Louie CK-style confessional comedy and pays her bills by working in a Brooklyn bookstore with a title right out of Portlandia: Unoppressive Non-Imperialist Bargain Books.

The film begins with Donna being unceremoniously dumped by her boyfriend in the bathroom of a comedy club. He’s cheating on her with a mutual friend of theirs. The first 20 minutes or so is mostly about Donna’s wine-soaked misery as she wallows in feelings of worthlessness and fantasies about murder-suiciding (“murder-su,” as she calls it) the happy couple and herself. She doesn’t, though she does nearly murder-su her own budding comedy career when she takes the stage and drunkenly rambles about her ex-boyfriend.

On the same night, she meets a nice guy – a very un-Brooklyn prep named Max – and they drink, dance to Paul Simon’s “The Obvious Child,” and have unprotected sex in his well-decorated apartment. Cut forward a bit. Donna has missed her period and breaks down crying when she realizes what this means. If she has a baby, her comedy career is done. Everything has to change. The choice, to put it as bluntly as possible, is either ‘murder’ or ‘su.’ If the baby lives, Donna’s old life dies.

In a scene that in many ways feels like the genesis of the movie, Donna’s pregnancy is confirmed by a Planned Parenthood doctor, who asks her if she wants to talk about her options. Without pausing, Donna replies, that she would like “an abortion, please.” The doctor asks her again if she’s sure, and Donna repeats herself, “I’d like an abortion, please.” The point is fairly clear, this isn’t a movie that’s going to treat abortion as an unspeakable option that exists only on the outer edges of human experience. Donna’s clarity and confidence carry the conviction that abortion is a legal medical procedure – a legal entitlement – that one can request with the same confidence that one could ask for tooth whitener at the grocery store.

In the same moment, the filmmakers also back away from the apparent reduction of human meaning carried by Donna’s blunt request, when she says she doesn’t want it to sound like she ordering “at a drive-thru.” The rest of the film, in many ways, explores this tension. The very fact that the protagonist of a romantic comedy could have an abortion necessitates abortion’s ethical neutrality. There can’t be anything deeply wrong here if we’re still rooting for and laughing with the main character.

But there are moments of tragedy that creep around the edges of the comedy. Donna’s friend and mother, when discussing their own abortions, insist on the rightness of the decisions. But a shadow momentarily falls over both women during each scene, as if from a passing cloud. Humor resurfaces again quickly. Donna’s mother jokes with her daughter as she talks about her abortion, and yet wipes away tears, unseen by Donna. “Abortion is no big deal,” the film shouts, but then whispers, “except that it kind of still is.”

These glimpses, around the edges, of a deeper tragedy than the film will fully admit, are good jumping off points for Christians to talk about abortion. The deep and incorrigible truth that we should never intend the death of innocent human life–even if that human life is a teeny little blastula–is nearly impossible to ultimately suppress. The megaphone loud voice of pro-abortion politics will not allow any doubts to be expressed. But Obvious Child, at least in its most quiet moments, seems aware of this suppressed knowledge.

In a more open and obvious manner, however, Obvious Child does lay bare what in many ways is the logic behind abortion. Abortion offers us a drive-thru understanding of life: everything is on our terms . . . when we want it . . . if at all. Donna’s commitment to drinking, gambling on a career in comedy, and muddling romantically around in Brooklyn are, in a serious sense, the non-negotiables of her life. While the most central and meaningful reality, the emergence of new life, is treated as an optional add-on. This is worth discussing as well. Christians have a word for putting unimportant things at the center of our lives, and central things at the edges. That word is idolatry. A culture that puts ease, career achievement, and sexual voluntarism above all else must lead inevitably and tragically, to the logic of abortion. We cannot simply question the ethics of abortion, we must also challenge the idols that demand it.

Get About Abortion: 10 Things a New Generation of Christians Should Know. Gain an understanding of the the all-encompassing changes to our culture brought about by Roe v. Wade.