On Choosing the Hell of a Predictable Situation - Seedbed
close
Menu 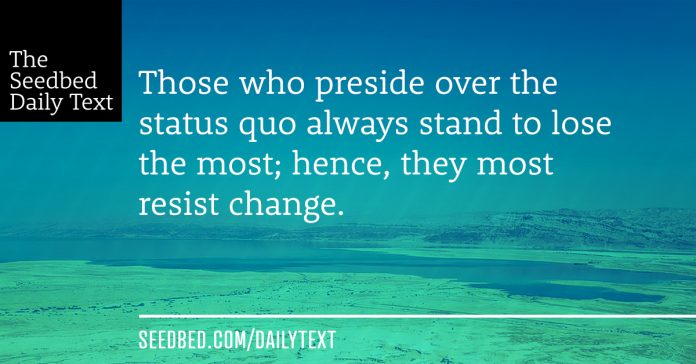 Therefore many of the Jews who had come to visit Mary, and had seen what Jesus did, believed in him. But some of them went to the Pharisees and told them what Jesus had done. Then the chief priests and the Pharisees called a meeting of the Sanhedrin.

“What are we accomplishing?” they asked. “Here is this man performing many signs. If we let him go on like this, everyone will believe in him, and then the Romans will come and take away both our temple and our nation.”

Then one of them, named Caiaphas, who was high priest that year, spoke up, “You know nothing at all! You do not realize that it is better for you that one man die for the people than that the whole nation perish.”

He did not say this on his own, but as high priest that year he prophesied that Jesus would die for the Jewish nation, and not only for that nation but also for the scattered children of God, to bring them together and make them one. So from that day on they plotted to take his life.

Therefore Jesus no longer moved about publicly among the people of Judea. Instead he withdrew to a region near the wilderness, to a village called Ephraim, where he stayed with his disciples. When it was almost time for the Jewish Passover, many went up from the country to Jerusalem for their ceremonial cleansing before the Passover.

No sooner has Lazarus walked out of the tomb than the religious leaders are trying to put Jesus in it. Finally, they show their cards:

“If we let him go on like this, everyone will believe in him, and then the Romans will come and take away both our temple and our nation.”

Those who preside over the status quo always stand to lose the most; hence, they resist change the most.

Our little fiefdom’s are pitiful, but they are ours. We can live the rest of our lives defending the status quo of our fiefdom, or we can let go and open ourselves to something we never imagined possible. My dear friend and mentor Maxie Dunnam says it this way, “Most people will choose the hell of a predictable situation rather than risk the joy of an unpredictable one.”

Abba Father, we thank you for your Son, Jesus, who calls us out of the mediocre predictable ways of the status quo and invites us to a great adventure. Give us the grace to say yes. We pray in Jesus’ name, amen.

1. What is the hell of a predictable situation in your own life right now? Are you ready to leave it behind?