On Gender, Marriage, Divorce, and the Questions of Our Time - Seedbed
close
Menu

When Jesus had finished saying these things, he left Galilee and went into the region of Judea to the other side of the Jordan. 2 Large crowds followed him, and he healed them there.

3 Some Pharisees came to him to test him. They asked, “Is it lawful for a man to divorce his wife for any and every reason?”

4 “Haven’t you read,” he replied, “that at the beginning the Creator ‘made them male and female,’ 5 and said, ‘For this reason a man will leave his father and mother and be united to his wife, and the two will become one flesh’? 6 So they are no longer two, but one flesh. Therefore what God has joined together, let no one separate.”

7 “Why then,” they asked, “did Moses command that a man give his wife a certificate of divorce and send her away?”

8 Jesus replied, “Moses permitted you to divorce your wives because your hearts were hard. But it was not this way from the beginning. 9 I tell you that anyone who divorces his wife, except for sexual immorality, and marries another woman commits adultery.”

10 The disciples said to him, “If this is the situation between a husband and wife, it is better not to marry.”

When Jesus had finished saying these things, . . . There’s our “clue” words. We know we just finished Jesus’ fourth teaching session of five in the Gospel of Matthew. Some draw a parallel between these five discourses and the books of Moses (i.e. the first five books of the bible). Suffice it to say we are moving into the home stretch.

And yes, it appears as though the Pharisees are going to goad him all the way to the Cross. We are back on marriage again. They are trying to catch him in some kind of inconsistency. Jesus takes them all the way back to the beginning and the story of Creation. He wants us to understand the Creator’s intent: male and female, husbands and wives, single and married, two becoming one flesh and so forth.

It all seems pretty straightforward. So why didn’t Jesus say anything about transgenderism or homosexuality or gay marriage? Maybe no-one asked him about such issues. At least we have no record of such questions. I try to imagine how Jesus would respond to such questions today. Clearly we live in a different day, and yet people are still the same. Scripture has not changed. So how is it that the categories of male and female, man and woman, husbands and wives, married and single have become so inadequate over the course of the last half century?

Take divorce from today’s text as a case study. The Creator’s intent would never have allowed for divorce. “Therefore what God has joined together, let no one separate.” As our ancient forebearers drifted away from the Creator’s intent concerning marriage, their laws changed as well. Moses made an allowance for divorce. Was that a good thing? No, Jesus says. It was because of the hardness of our hearts. Wouldn’t it be a reasonable assessment to contend that the legitimization of divorce may have been one of, if not the  most harmful decision in the history of the human race?

How are we to understand the conflicted times in which we live? Are we now witnessing another watershed moment of allowance as it relates to more seeming departures from the Creator’s intent—on such fundamental issues of gender, sexuality, marriage and such? What if these present departures are actually a fruit of the former allowance for divorce made by Moses?

These are confusing times, and yet God has not given us a spirit of fear but of love, power and a sound mind. The last thing we need are more Pharisaic spirits in the mix. It is most important that we show ourselves to be the followers of Jesus.

Heavenly Father, remind us that in these chaotic times and with such conflicted issues that we aren’t dealing with issues but with human beings. Give us the grace to hold our convictions with grace, the courage to suffer for them if needed, and the love to defend them without desecrating or destroying those with whom we disagree. For the sake of the great name of Jesus, Amen. 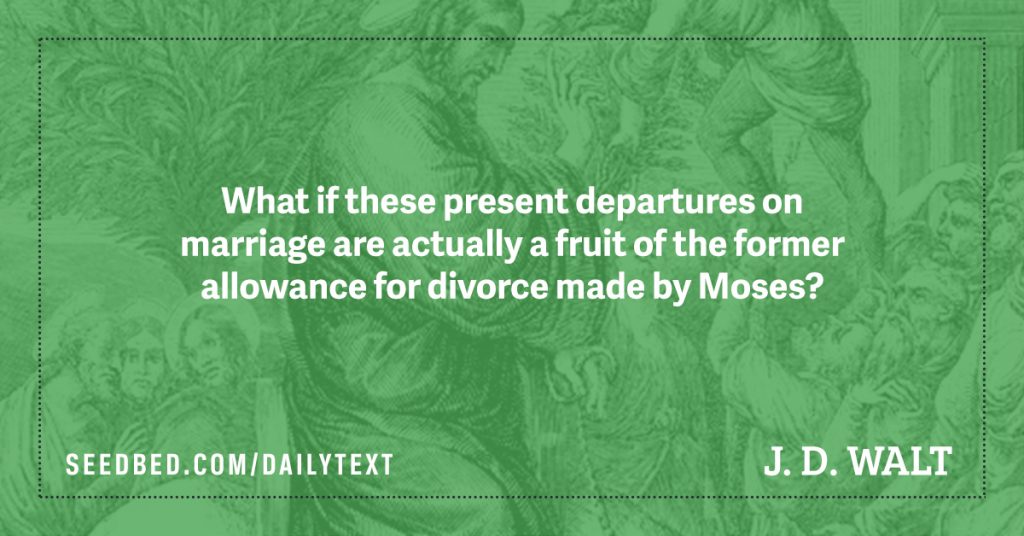 1. How do you think Jesus would respond to the looming questions swirling about us as relates to gender, sexuality, marriage and such today?

2. What do you think about this issue of divorce as one of the most devastating allowances made in the history of the world? Even those of us who have suffered through divorce can hold on to the mercy of God while trying to be objective about the bigger realities divorce has created.

3. How can we deal with these most challenging questions of our time without being pharisaical about it?

© Seedbed 2021
On Gender, Marriage, Divorce, and the Questions of Our Time
MORE STORIES