On Learning to Pray: From Polite Conversation to Crying Out to God - Seedbed
close
Menu 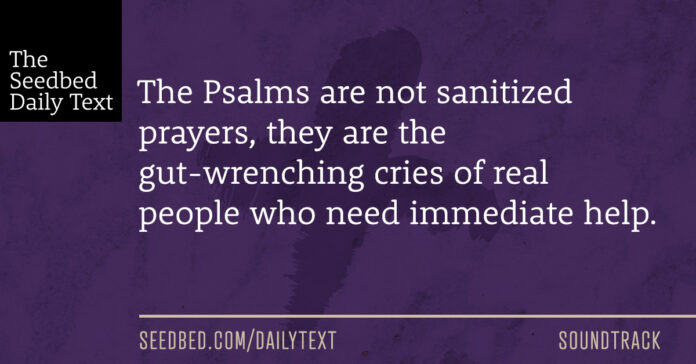 To the tune of “God Moves in a Mysterious Way” C.M. D Sing it at seedbed.com/soundtrack

1 Be merciful to me, O God,
for vile men pursue me;
All through the day they come at me,
strongly attacking me.

2 They slander me as they pursue,
all day they’ve cruelly lied;
How many are attacking me
with arrogance and pride.

3 When I’m afraid, I’ll trust in You,
in God whose word I praise;
4 In God I trust; I will not fear;
what harm can mere men raise?

5 But all day long they twist my words,
they plot to bring me strife;
6 They lurk and watch my steps, conspire
to take away my life.

7 On no account let them escape,
in anger bring them down.
8 Keep my tears in Your scroll, O God;
let my lament resound.

9 Then all my foes will be turned back,
when for Your help I call;
By this I’ll know that You’re with me,
and will not let me fall.

12 I’m under vows to you, O God;
I will present to You
the offerings that give You thanks—
to my vows I’ll be true.

13 For You delivered me from death,
my feet from stumbling strife;
That I may walk before You, God,
within the light of life.

By the time we get to Song 56, life stinks for David. The anointed king of Israel finds himself far from the throne and on the run from the rogue royal, Saul. The giant-slayer seeks refuge in the giant’s home country. How could things go so wrong for one who held so much promise?

We don’t too often find ourselves with such violent enemies as David did, but we know what it’s like for our best-laid plans to go south. Whether you are dealing with murderous threats or you got passed over for the promotion, one of the biggest lessons of the Psalms is also the most obvious one: cry out to God! By now, we know the Psalms are not sanitized prayers for the suburbs. They are the gut-wrenching cries of real people who need immediate help.

I remember the years when my life, as I’d planned it, began to disintegrate. Armed with a résumé to kill for, heading into my second year of law school, at the peak of privilege, I basked in a sea of opportunities. On the eve of writing my golden ticket, I awakened to a knowing beyond knowledge that I was headed down the wrong path for my life. Another calling arrested me, and I resisted as if it were the plague. In those days, for the first time, I learned to cry out to God. Literally. This went on for months. Though what I cried out for did not happen (a release from this calling), absolutely everything else did change. I’m not sure what I considered prayer to be before those days, but in light of my crying out to God, it was polite conversation and unholy small talk.

It’s a longer story I will save for later, but suffice it to say, I have never been the same since.

Start thinking of the Psalms as a school of prayer.

Have you discovered a place of prayer beyond polite petitions? Would you be willing to go into a room, close the door, and voice aloud your situation before God? Even though he knows it, speak out your situation before God. This is the only way it gets out of your own anxious spirit and into God’s hands. Don’t underestimate the importance of this simple step. It’s not just a good idea; it’s an essential practice.