The Pharisees and Sadducees came to Jesus and tested him by asking him to show them a sign from heaven.

2 He replied, “When evening comes, you say, ‘It will be fair weather, for the sky is red,’3 and in the morning, ‘Today it will be stormy, for the sky is red and overcast.’ You know how to interpret the appearance of the sky, but you cannot interpret the signs of the times.4 A wicked and adulterous generation looks for a sign, but none will be given it except the sign of Jonah.” Jesus then left them and went away.

All those earthly signs weren’t enough. They wanted a sign from heaven. Apparently they wanted something to happen in the stars, and that’s pretty ironic given the way this whole Gospel story began with the astrologers coming half way across the world following such a sign; a star sent from heaven.

Jesus responds to them that the problem is not a lack of signs but their inability to interpret them. All of the signs of the times now pointed to the beginning of the end of time—which is another way of saying that the Kingdom of Heaven was now breaking in on Earth through the person of Jesus Christ. The signs—blind eyes seeing, deaf ears hearing, lame legs walking, dead people rising, poor hearing good news—all pointed to the now near Kingdom. So Jesus gave them this:

A wicked and adulterous generation looks for a sign, but none will be given it except the sign of Jonah.”

Remember that one? On the third day after being swallowed up by the great fish, Jonah was spit out onto the shores of Ninevah. The final sign would be Jesus resurrection from the dead. This would be the sure sign that the beginning of the end of time had begun. That’s where this story is headed. We are just about to make the turn.

We still live in the midst of unbelieving generations who say they will not believe until they have been given a sign. They are not leaning into faith but away from it. We must try to help those leaning into faith to navigate past their obstacles. It’s a different story for those leaning away. More often than not they are trying to shake the faithful off their foundation. The temptation is to try and prove something to them; to enter the argument on their terms. In many cases, what they most need from us is not a defensive argument that more often than not reveals our own insecurity. What they need is to witness a kind of quiet faith that cannot be moved by their doubt. They need to see a faith that can love them in the midst of their doubt, even if they never believe.

The sign of Jonah still stands. In the end, it will be the only sign that matters.

Lord Jesus, so many people live in the struggle of an in-between faith. They believe and yet they need help with their unbelief. Sometimes we are those people. Help us to recognize and help them. Give us discernment to spot those people who not only do not want to believe but they want to prove us wrong. Give us grace to love them anyway and leave the outcome to you. We pray in the only name that can convince, your name Jesus. Amen. 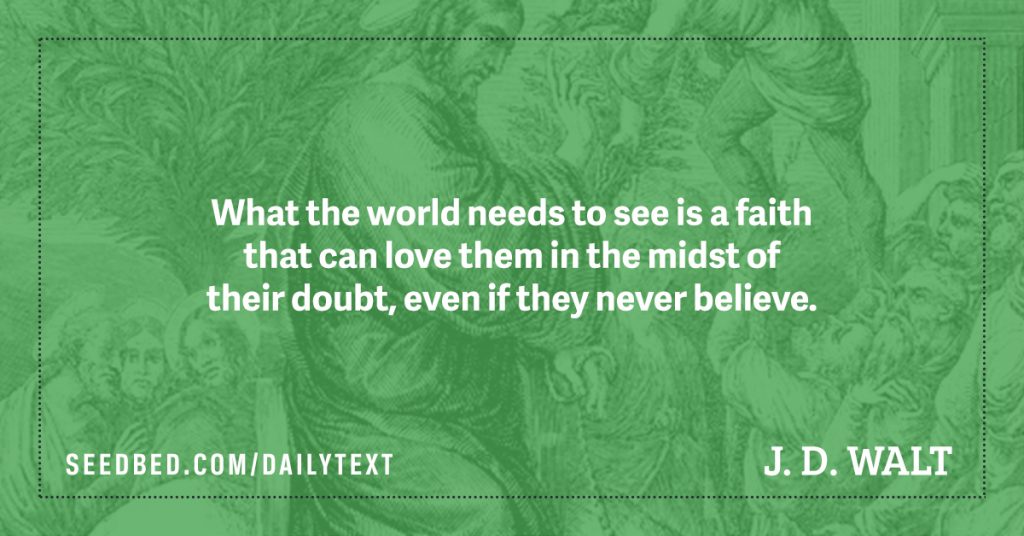 2. Why is it important to be able to tell these two kinds of cases apart?

3. How might we avoid being put on the defense by those who come attacking our faith with their unbelief? How can we resist the temptation to defend ourselves?