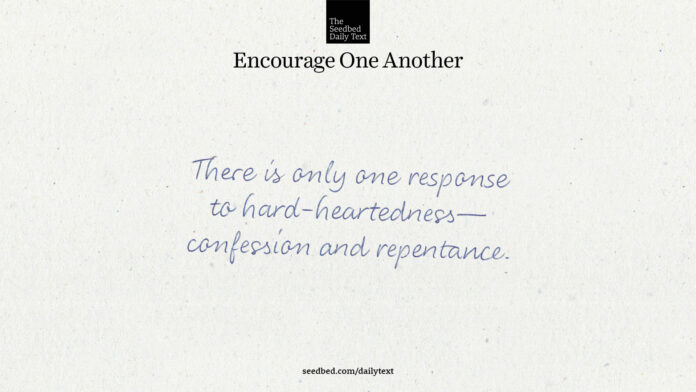 It’s just a good thing I am not a pilot or a surgeon, because yesterday I would have crashed the plane and killed the patient. I was wrestling with today’s Daily Text over the weekend and got the scheduling wrong, leading to the partial posting of this paragraph below, which left you with a cliff hanger and me with a predicament. I was not committed to even finishing the paragraph, much less going public with this kind of assertion. I would have probably deleted it and gone in a less threatening and more benign direction. I felt, though, I at least owed it to you to finish my thought.

See to it, brothers and sisters, that none of you has a sinful, unbelieving heart that turns away from the living God.

It is easy to read this and think, “Of course I believe in God.” An unbelieving heart is a far more subtle thing and it can be hard to see it coming. The assault of darkness, evil and even suffering and hardship is not to get us to stop believing “in” God. It is to cause us to stop believing God. You see the difference don’t you. It is an easy thing to “believe in God.” It is another thing entirely to “believe God.” The former is an affirmation of faith. The latter is faith itself. There are many souls who “believe in God” and yet whose hearts have turned away from the living God. I am writing this series as a response to the admonition in today’s text: “See to it.” This is what I would call flagrant encouragement.

We are living in a wilderness of sin, and by “we” I mean Christians who are living in the United States of America. Our hearts have become hardened by sins deceitfulness. Covid-19 has not caused this situation. It has only revealed it to us, and it has in all likelihood accelerated this hardening of hearts. Already, as many read this, tension is rising up within, which is itself a sign of both a defensiveness and an offensiveness—both of which are signs of a warring spirit—which is the nature of the reactiveness of a hardened heart. Over the past fifty years, this nation has become slowly ravaged by an increasingly toxic, partisan battle of political ideologies, which have infiltrated the Body of Christ and become almost inextricably intertwined and wrapped in thin and often dubious biblical and theological justifications and warrants for our politically partisan positions and convictions.

To be clear, Jesus Christ is always political—never partisan. The single most explosive political statement ever made from the first century to the twenty-first century is this one: Jesus Christ is Lord. It is an affront and direct assault on the kingdoms of this world (even these United States). And while it is the most threatening declaration to the kingdoms of the world, it is also the most non-partisan declaration. Every party should find it equally offensive. And the belief that any political party aligns with the Lordship of Jesus Christ is the ultimate deception and the most dangerous alliance of all.

From the earliest days of the Old Testament to the present day, the people of God have made all manner of alliances with other nations, political leaders, parties, and causes in order to promote and protect their interests and preferred vision. To say Jesus Christ is Lord is a fiercely political statement because it effectively means no other alliances.

When biblical/theological truth becomes tainted and compromised by ideological frameworks and pragmatic alliances it leads invariably to idolatry. An idol is anything or anyone we put our hope in other than or in addition to Jesus Christ. Idols are lifeless things that promise flourishing life and when we put our hope in a lifeless thing in pursuit of flourishing life we become lifeless. It’s why the telltale sign of idolatry is hard-heartedness. There is only one response to hard-heartedness—confession and repentance. Tragically, the person with a hard heart is all too often the last one to know.

So what am I saying in this super sticky place I recognize I am getting myself into? I am saying a lot of things, and I am not saying a lot of other things. It is too much to sort out in such a short place. And please resist the urge to react to what I have written here with rebukes and rebuttals (or even Amen’s for that matter). I only ask you to consider it. My considered opinion is the people of God in our time are seriously compromised by the party spirit, deeply asleep, and hardened in heart. I do not make this judgment about you individually, but I urge you to take it to heart personally. Could your heart be hardened by sin’s deceitfulness? Will you open your heart and mind to the searchlight of the Holy Spirit. Would you step onto the threshing floor of God’s mercy and allow yourself to be winnowed by Jesus Christ himself?

We have all been through a cataclysm which has put our hearts in perilous places. It is entirely possible that we have hardened our hearts slowly and imperceptibly over the course of these long months. It has brought bitter conflict, quarreling, and grumbling into our hearts, homes, churches and cities. We must reckon with this if we are to be set free from it and be healed.

I promise, this series will level off into a more encouraging and less confrontational altitude. For some reason, I sensed the Lord wanted us to begin here. Please know my heart is not to offend but to speak the truth in love so that the Body of Christ may be built up and cease to be tossed to and fro by the deceitful waves of this present darkness.

God our Father, I want to humble myself and confess and repent of the deceitfulness of sin. I want to acknowledge that my heart is susceptible to being deceived. I am not above it. Would you pour out your grace and mercy on me in such a way that it leads to deep self knowledge and humble honesty. Where have I turned on other people? Where do I no longer give the benefit of the doubt? Where am I making human beings into mortal enemies? Where have I made alliances with ungodly idols in order to attempt to effect Godly things?  Where have I gotten it wrong? Come Holy Spirit, awaken my spirit, and soften my heart. In Jesus name, Amen.

How do you see the difference between believing “in” God and “believing God?”

You may have heard me mention banded  discipleship from time to time. Today, (Tuesday, October 5), we’re hosting a free webinar called BAND TOGETHER: Understanding What a Band Is and How to Start One. It will be 90 minutes with Mark Benjamin in which you will learn all about Discipleship Bands—including what a band is, why bands are so impactful, and how to start a band yourself. Register here.