On the Difference Between Certainty and Faith - Seedbed
close
Menu 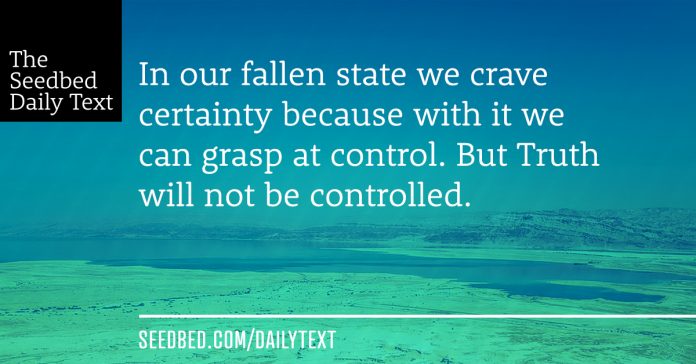 At that point some of the people of Jerusalem began to ask, “Isn’t this the man they are trying to kill? Here he is, speaking publicly, and they are not saying a word to him. Have the authorities really concluded that he is the Messiah? But we know where this man is from; when the Messiah comes, no one will know where he is from.”

Then Jesus, still teaching in the temple courts, cried out, “Yes, you know me, and you know where I am from. I am not here on my own authority, but he who sent me is true. You do not know him, but I know him because I am from him and he sent me.”

At this they tried to seize him, but no one laid a hand on him, because his hour had not yet come. Still, many in the crowd believed in him. They said, “When the Messiah comes, will he perform more signs than this man?”

The Pharisees heard the crowd whispering such things about him. Then the chief priests and the Pharisees sent temple guards to arrest him.

This is a real problem for the leaders of Israel and the temple. Add to this the growing uprising of faith among the people and we have a problem of Houstonian proportion. Of course, they needed to do something about Jesus. Put yourself in their shoes. How would they understand anything other than that Jesus was a rogue prophet?

And that’s the big problem with religion. It’s not faith, but certainty. Certainty destroys faith by crushing anything that challenges it. In our fallen state we crave certainty because with it we can grasp at control. But truth will not be controlled. It can only be embraced. Faith embraces truth, while certainty tries to pin it down. Is not this the great irony—these bastions of religious certainty, the ones with a lock on the truth—would ultimately pin Jesus, the truth, down. . . to a cross.

The Pharisees heard the crowd whispering such things about him. Then the chief priests and the Pharisees sent temple guards to arrest him.

And lest we blame them, we must realize they are only earlier versions of us.

Actually, it’s the beginning all over again.

Abba Father, we thank you for your Son, Jesus, who in being taken captive set us free from our captivity. Grant us the gift of faith and the courage to let go of the lie of certainty. Though truth be fixed, it will not be held captive by the control we wield with our certainty. Let faith arise. Come, Holy Spirit, and let faith arise. We pray in Jesus’ name, amen.

1. What do you think of this distinction between certainty and faith?

2. Why do we crave certainty? Why do we struggle with faith?

3. Why do we think we would not be standing with the religious leaders had we been there at the time?