On The Hopelessness of Democrats and Republicans - Seedbed
close
Menu

15 Then the Pharisees went out and laid plans to trap him in his words. 16 They sent their disciples to him along with the Herodians. “Teacher,” they said, “we know that you are a man of integrity and that you teach the way of God in accordance with the truth. You aren’t swayed by others, because you pay no attention to who they are. 17 Tell us then, what is your opinion? Is it right to pay the imperial tax to Caesar or not?”

18 But Jesus, knowing their evil intent, said, “You hypocrites, why are you trying to trap me? 19 Show me the coin used for paying the tax.” They brought him a denarius, 20 and he asked them, “Whose image is this? And whose inscription?”

Then he said to them, “So give back to Caesar what is Caesar’s, and to God what is God’s.”

22 When they heard this, they were amazed. So they left him and went away.

Here we see the conflicted convergence of four political movements: the Pharisees, the Herodians, Caesar and the Romans and Jesus. There’s yet another lurking we will see again tomorrow, the Sadducees. One of these movements is not like the others. It’s obvious to us in retrospect which one is different, but it is never obvious at the time. It’s a question of agendas. Caesar, of course, is the de facto sovereign of the land. The Pharisees, Sadducees and Herodians all have their programs of reform and revolution designed to oust Caesar from the land so they can claim their rightful sovereignty. They all claim the sovereignty of God in support of their agenda and campaigns. The interesting feature here is that the Herodians and the Pharisees hate each other, yet they are making an alliance against Jesus. File that one under the old adage, “My enemy’s enemy is my friend,” or, “Politics makes strange bed-fellows.”

They all had agendas to restore “God’s” reign to the land, yet their agendas diametrically opposed God himself, aka Jesus. Clearly, they did not recognize or acknowledge Jesus as God, but then again so many of the movements that attempt to accomplish their agenda in God’s name don’t either.

Note their tactic in trying to trap him. They use flattery. “We know that you are a man of integrity and that you teach the way of God in accordance with the truth. You aren’t swayed by others, because you pay no attention to who they are.”

Next they try to draw Jesus into their political matrix. “Is it right to pay the imperial tax to Caesar or not?”

Not only is Jesus not playing on their playing field, he is not even playing the same game. Talk about bringing a knife to a gunfight. These “tricksters” were completely outmatched. Jesus draws a circle around their whole shooting match with his response. “Show me the coin used for paying the tax.” They brought him a denarius, 20 and he asked them, “Whose image is this? And whose inscription?”

Then he said to them, “So give back to Caesar what is Caesar’s, and to God what is God’s.”

The coin bearing Caesar’s image belongs to Caesar, but Caesar, who bears the image of God belongs to God. All these little warring factions and kingdoms in conflict with all their petty political machinations would at best be a footnote in the story of the Kingdom of God.

This drama is still playing out today. Only the names and political parties have changed. The followers of Jesus must pay the “taxes” levied by the kingdoms of this world, but we can never succumb to the their politics. We are of another political realm entirely, and it is political all right. Ultimately, every knee will bow and every tongue will confess that Jesus Christ is Lord. That is the long game. We will play it now or we will not play it at all. Playing the long game now means living in the midst of the present (and passing) order of things but not living according to it’s dictates and not aligning ourselves with it’s short sighted power grabbing agendas. We are the inheritors of real authority. We must learn to live as those worthy of the trust.

Permit me an unvarnished, emphatic assertion. To the extent we place our hope in the Democrats or the Republicans or our elected officials or the man made institutions and machinations of our government—to that extent, we are hopeless.

So what will it mean for us to live as those whose only hope is in our Lord, Jesus Christ? It seems like the only relevant question we should be asking ourselves in this election season.

And if you are looking for a revolutionary alternative on election day this year have we got a deal for you.

Almighty God, you are the Sovereign of Heaven and Earth. We don’t want to get mixed up in the agendas of the Pharisees and the Sadducees and the Herodians and the Caesars of our time. Grant us the discernment to see through those thinly veiled plays for power and control. Reveal to us the alternative reality of the Kingdom of your making, the one whose authority is as absolute as it is accessible to all. We want to be part of the generation whose hope is squarely and securely and solely placed in you, whose only confession is, “Jesus is Lord,” and whose only prayer is, “Thy Kingdom Come!” Come Holy Spirit! We pray in Jesus name, Amen. 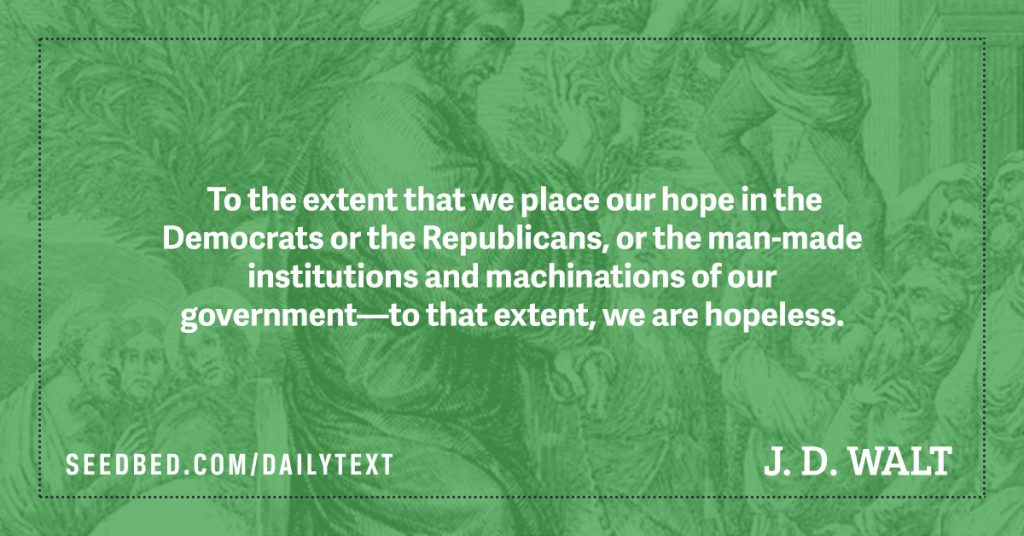 2. How do we live in the reality of the image of Caesar and the image of God? What are the implications for us?

3. Is your hope in the institutions of government? Are you caught up in all the machinations of all that is trying to put us together by tearing us apart? What would it look like to hope solely and exclusively in Jesus?

© Seedbed 2021
On The Hopelessness of Democrats and Republicans
MORE STORIES