On the Prison of a Good Reputation - Seedbed
close
Menu 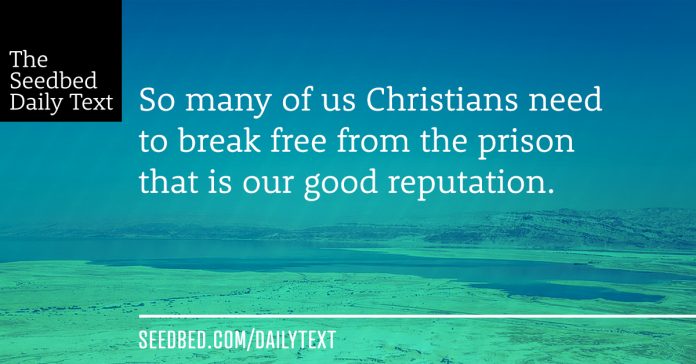 Now there was a Pharisee, a man named Nicodemus who was a member of the Jewish ruling council. He came to Jesus at night and said, “Rabbi, we know that you are a teacher who has come from God. For no one could perform the signs you are doing if God were not with him.”

Jesus replied, “Very truly I tell you, no one can see the kingdom of God unless they are born again.”

“How can someone be born when they are old?” Nicodemus asked. “Surely they cannot enter a second time into their mother’s womb to be born!”

We are about to witness our first defection. We would call Nicodemus a pillar of the synagogue. He’s the guy who never misses. Everyone knows exactly where he sits and should the rare occurrence happen and he not be there, the seat remains empty. He’s among the top givers. He’s a member of the Sanhedrin, which for us would be a mix between a federal judge and a United States senator. He’s a man of great esteem and honor. We cannot speak ill of Nicodemus. He has been a paragon of faithfulness to all he has been taught.

People like Nicodemus don’t tend to risk their status and standing in the community. So why did he do it? Henry David Thoreau once wrote, “Most people lead lives of quiet desperation.” I think Nicodemus had gotten in touch with the quiet desperation just under the polished surface of his life. Though he had everything, he knew deep down he was missing the most important thing.

It’s not so hard for a non-churched Nicodemus-type to awaken to faith. So why is it so hard for a leader or a respected pillar of the church to be awakened? Why is it so hard for leaders in the church to admit that they aren’t quite the people everyone thinks they are? What keeps us from mustering the humility it takes to confess that though we may be seminary-level Bible readers, we remain stuck in junior-high faith? Why do we choose to be admired at the expense of being known?

Though he came under cover of darkness, it seems Nicodemus was done with such charades. He knew there must be more than what he knew and he was ready to sacrifice his pride to know it. This was the day Nicodemus broke free from the prison of his good reputation.

Why is it so easy for a sinner to come to the Lord and so hard for a saint?

We will dive into the conversation with Nicodemus tomorrow.

Abba Father, thank you for your Son, Jesus, who invites us to come out from under the covering of our reputation and get honest about our own souls. Come, Holy Spirit, and fill us with the courage to be real that we might grow in the Lord beyond our imagining. We pray in Jesus’ name, amen.

1. How do you see yourself in Nicodemus?

2. Can you identify the quiet desperation in your own life?

3. Why is it hard for those of us who have been in the church so long to find our way to the altar of humility and honesty about our real condition? Are we worried about what others might think?