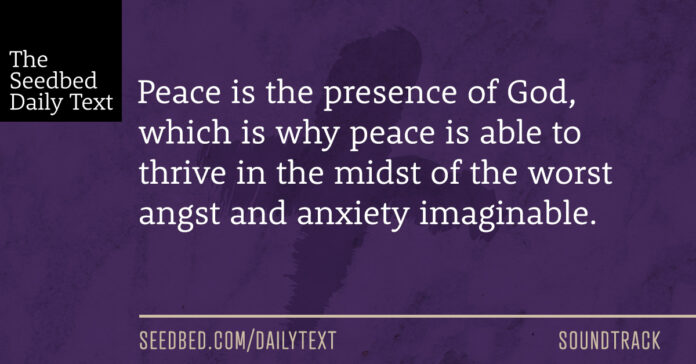 To the tune of “O God Our Help in Ages Past” C.M. Sing it at seedbed.com/soundtrack

1 I call the Lord in my distress
and He does answer me.
2 O save me, Lord, from lying lips
and tongues that speak deceit.

3 What will He do to you, O tongue,
Deceitful as you be?
4 He’ll punish you with arrows sharp
and coals of the broom tree.

5 O, woe to me, that I must dwell
in Meshech, Keder’s land!
6 Too long I’ve lived among the ones
who peace don’t understand.

7 For I am one who longs for peace,
But they do peace abhor.
When I speak of my heart for peace,
They only are for war.

Think of it this way. In life we see two primary centers of gravity: war and peace. People tend to be caught in one or another of those gravitational pulls. The unfortunate default state of the human race is the state of war. In the beginning, when God created the heavens and the earth, all of creation enjoyed the peace of God. The fundamental character of peace is that of deep contentment. The fundamental character of war is discontentedness. Adam and Eve demonstrated a discontentment with the state of perfect peace when they chose to disobey God. The result was war. At the core of the ensuing curse came conflict—between men and women, between people and creation, and between creation and God.

War, in its essence, is the concentrated, accumulated impact of sin. War uncreates creation. Peace makes creation new again. War can be declared in an instant through the breaking of a relationship. Peace must be worked out through the mending of relationship (and it often takes time). War is the absence of peace. However, peace is not the absence of war. Peace is the presence of God, which is why peace is able to thrive in the midst of the worst angst and anxiety imaginable. It’s why they call it the peace that passes all understanding.

God sent his Son, the Prince of Peace, into the warring factions of his creation and the result was the persecution of crucifixion. Peace won out though. On the third day, he was raised from the dead. After his resurrection, he gathered with his followers and said to them, “‘Peace be with you! As the Father has sent me, I am sending you.’ And with that he breathed on them and said, ‘Receive the Holy Spirit’” (John 20:21–22).

So there’s the story of war and peace. Peacemakers need a song. We get that today in Song 120.

War is the absence of peace, but peace is not the absence of war. Do you grasp the truth in this statement? Identify situations in your life where the conflict may be in the past but peace still eludes you. Do you want peace or are you satisfied with an uneasy truce?