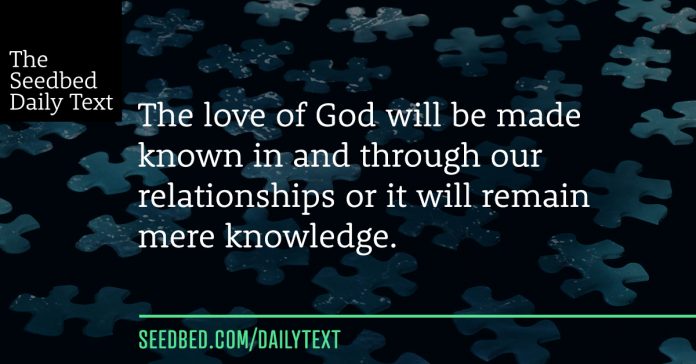 4 There is one body and one Spirit, just as you were called to the one hope of your calling, 5 one Lord, one faith, one baptism, 6 one God and Father of all, who is above all and through all and in all.

One Body. Twenty-something thousand denominations. The former seems like the fiction; the latter the fact.

Growing up in small town Arkansas the only thing more distinctive than the NFL team you rooted for on Sundays was what church you went to. Rather than a “one body” mentality, everyone had the strong certainty that there were two groups: “my church” and all the others.

Today’s text speaks into this reality that for many of us is a lot closer than the rear-view mirror might indicate.One body. One Spirit. One hope. One Lord. One faith. One baptism. One God and Father. And somewhere between twenty and thirty thousand different denominations.

This last number is hotly contested and the subject of much hang-wringing and spiritual angst among earnest unity seeking followers of Jesus Christ. It used to bother me a lot more than it does now. Why not now? Because I believe the Bible. The Bible clearly says in today’s text that there is only one body. It has me wondering if God even recognizes all these different and distinctive organizational entities we call denominations. There is only one body—the Body of Christ.

Google-Earth out with me for a minute. Does God recognize the distinction between “North America” and “South America?” Is God as anxious as we are about the imaginary line separating the United States and Mexico (or Canada—to steer clear of political landmines)? Is God even the slightest big concerned about the biological and ethnic differences between people born one mile north of this imaginary line and one mile south of it?

Switch gears with me and think by analogy about the United States of America. We are all from or live in different states, and much pride is rightfully taken in one’s state of origin or residence, but we aren’t fighting over it. (O.K., there was that one time). You can have your football team and we can have ours, but at the end of the day we are all on the same team. When you are in another country and asked where you’re from you don’t say, “Rhode Island.” No, you say you’re from “The States,” or the USA. I know, Texans can get a little loud and proud ;0), but you see my point. For the most part we love our states but we identify with our country. It binds us together.

It’s remarkable to have fifty contiguous (effectively) sovereign countries whose unpatrolled borders are little more than a sign on the interstate one can pass through without even slowing down; where a dollar is a dollar is a dollar, and everybody knows the words to the Star Spangled Banner by heart. (When is the last time you sang your state song?)

I remember going to a Promise Keeper’s event back in the nineties. At one point in the event the speaker asked every person in the crowd of 60,000 men to shout out their church denomination on the count of three. The sound was chaotic and unintelligible. So many voices saying so many different things had the effect of all those voices saying nothing despite shouting at the top of their lungs. Then the speaker asked every person present, on the count of three, to shout out the name of Jesus. The contrast stunned me. The unity was palpable.

Call me unsophisticated and naive for being duped by such a shallow stunt, but it has me still asking decades later, “Could it be that simple?” Does God really care about the difference between a Methodist and a Baptist and a Pentecostal? Or is there really one name above all names? In my humble opinion, (and my best understanding of Scripture), I think God looks right past these many-varied, multi-faceted distinctions to the to the singular matters of one body, one Spirit, one hope, one Lord, one faith, one baptism, one God and Father of all. In the end it won’t matter what church you were a part of. Only one thing will matter. Are you part of the one Body?

And that will come down to an even simpler question. Jesus?

In the end, as in the present, there is only one body. So what if there are twenty-something thousand denominations? Could our discipleship take us to a higher vantage point—or maybe to a lower one—a.k.a. The Cross; the people God calls, “one body.” Only here can we possibly become the United Church of Jesus.

The truth? One Body is the fact. Twenty-something thousand denominations is the fiction.

Abba Father, we thank you for your son, Jesus, who you gave the name above all names. Yes, it is at the name of Jesus that every knee will bow and every tongue confess that Jesus Christ is Lord and all to your glory. Teach me to live into this reality now, beyond just a wispy ideal. Take me to the foot of the cross and introduce me to brothers and sisters from whom I can learn from and with whom I can learn to love the world. We pray in Jesus name, amen.