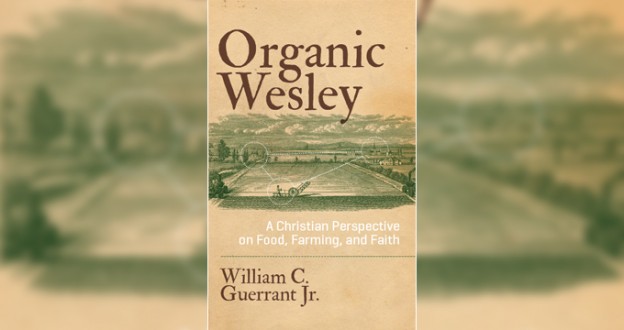 As a child, growing up in Central Pennsylvania, farmer’s markets, homegrown produce stands and local butchers were common. Until age 18, I ate a diet of natural, whole, unprocessed foods, locally grown and produced by individuals that I could name. But life changed, I moved to the city and my good eating habits went by the wayside. Like the rest of the population of the United States, I was drawn into the ease and the economy of an industrialized food market. Organic Wesley by William C. Guerrant Jr. allowed me the opportunity to take a long, hard look at my personal eating habits and make some badly needed changes. If Organic Wesley can do the same for other clergy and laity within the Methodist heritage, this book will have achieved its purpose in recovering a Wesleyan food ethic.

Organic Wesley does a great job of outlining current concerns about the modern food industry and how Wesley would respond to those concerns. Using Wesley’s own writings Guerrant argues the ethical implications of factory farming, processed food, chemical-based farming, and the globalization of the food market. He reminds the reader of Wesley’s respect for God’s creation, his concern for good health, and Wesley’s insistence of the necessity of living simply and unpretentiously. He weaves Wesley’s opinions throughout the book and as the title says, gives the reader a Christian perspective on food, farming and faith.

Organic Wesley also gets to the heart of the matter when it outlines the necessity of eating in moderation. Guerrant writes, “Today nearly 70 percent of Americans are overweight, and more than one-third are clinically obese” (42). He makes the argument Wesley would see our overeating, or our eating of obesity inducing, unhealthy food to be a product of gluttony, a lack of temperance and the absence of self-control. For Wesley, obesity was a “moral failure.” Wesley wrote, “They know how much they have sinned by excess of food; how long they have transgressed the holy law of God…impairing even their bodily health–certainly to the no small hurt of their soul” (45-46). Wesley’s position seems a harsh indictment of the majority of Americans. After all, eating is a socially accepted sin. Even Garrison Keillor jokes, “You know you are a Methodist when doughnuts are a line item on the budget” (51).

Certainly change is needed if clergy and laity in the Wesleyan heritage are to change their eating habits and help our communities recover not only bodily health, but the health of their souls as well. Utilizing Guerrant’s extensive research into the food movement and its relationship to Wesley’s writing, it would be entirely possible to create a sermon series on a “Wesleyan Food Ethic.” Such a series might include such topics as: Soul Food, The Problem of Abundance, The Necessity of Moderation, and You Are What You Eat.   We all know the seven deadly sins and, perhaps with a little help from the pulpit, we might come to know these seven words, “Eat nutritious, ethically sourced food, in moderation” (133). And there is the rub. For the love of God, can we curb our appetite?