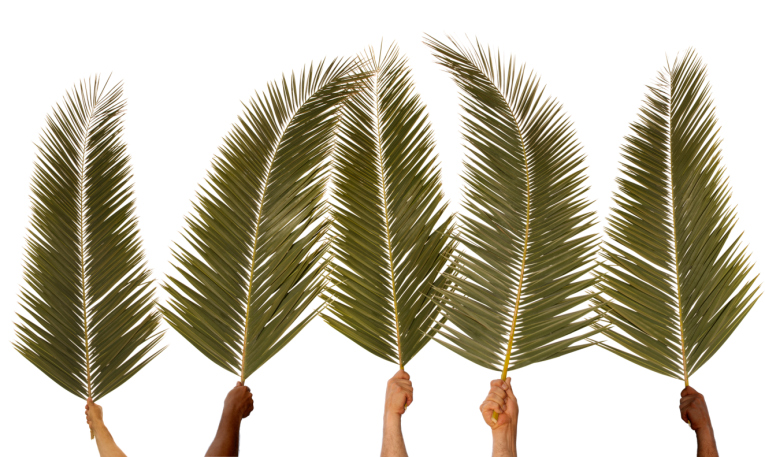 On Palm Sunday, or Passion Sunday, the church celebrates the triumphal entry of Jesus the Christ into Jerusalem, a week before his death and resurrection. Many churches celebrate with palms during worship and then burn the palms at the end of service and save the ashes for use on Ash Wednesday of the following year.

The triumphal entry of Jesus into Jerusalem has messianic significance because it is one of the earliest times that Jesus allowed the public acknowledgement of his identity as Messiah. This would have put him in the direct purview of the religious authorities who ultimately forced his death. In contrast to the Greco-Roman and Near Eastern cultures surrounding Jerusalem, Jesus’ triumph was humble and lowly, while Caesars and other rulers displayed their extravagance and tokens of their military conquests before a city.

O Christ our God
When Thou didst raise Lazarus from the dead before Thy Passion,
Thou didst confirm the resurrection of the universe
Wherefore, we like children,
carry the banner of triumph and victory,
and we cry to Thee, O Conqueror of love,
Hosanna in the highest
Blessed is He that cometh
in the Name of the Lord
–Toparion of Lazarus Saturday and Palm Sunday

See, your king comes to you, righteous and victorious, lowly and riding on a donkey, on a colt, the foal of a donkey.
(Zechariah 9:9)

On the first day you are to take branches from luxuriant trees–from palms, willows and other leafy trees–and rejoice before the LORD your God for seven days. (Leviticus 23:40)

Blessed is he who comes in the name of the Lord.From the house of the Lord we bless you.The Lord is God,and he has made his light shine on us.
With boughs in hand, join in the festal processionup to the horns of the altar.You are my God, and I will praise you;you are my God, and I will exalt you.Give thanks to the Lord, for he is good;his love endures forever.
(Psalm 118:26-29)

The next day the great crowd that had come for the festival heard that Jesus was on his way to Jerusalem. 13 They took palm branches and went out to meet him, shouting,
“Hosanna!”
“Blessed is he who comes in the name of the Lord!”
“Blessed is the king of Israel!”
(John 12:12-13)

There before me was a great multitude that no one could count, from every nation, tribe, people and language, standing before the throne and before the Lamb. They were wearing white robes and were holding palm branches in their hands. (Revelation 7:9)