When "Parting Ways" Is the Way to Go - Seedbed
close
Menu 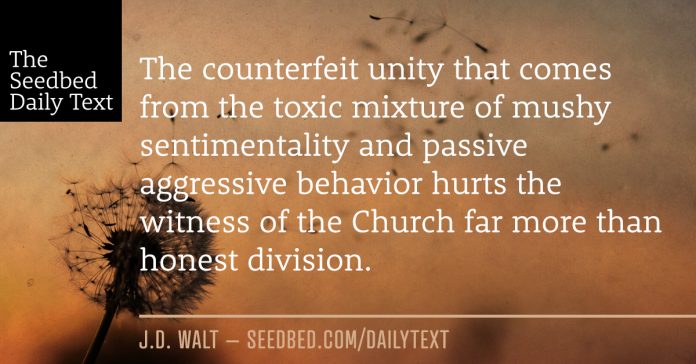 Some time later Paul said to Barnabas, “Let us go back and visit the believers in all the towns where we preached the word of the Lord and see how they are doing.” Barnabas wanted to take John, also called Mark, with them, but Paul did not think it wise to take him, because he had deserted them in Pamphylia and had not continued with them in the work. They had such a sharp disagreement that they parted company. Barnabas took Mark and sailed for Cyprus, but Paul chose Silas and left, commended by the believers to the grace of the Lord. He went through Syria and Cilicia, strengthening the churches.

You know the old saying: “Fool me once, shame on you. Fool me twice, shame on me.” Paul was not willing to take the chance on John Mark. He didn’t think it wise. We’re talking about the apostolic big leagues here; not whether John Mark is going to show up for ushering duty on Sunday.

It’s refreshing to see people within a community who can’t come to agreement decide to call it what it is and part ways. The counterfeit unity that comes from the toxic mixture of mushy sentimentality and passive aggressive behavior hurts the witness of the Church far more than honest division.

It’s one of the things I appreciate about the Baptists. When their churches can’t come to agreement, they find a way to declare a new church plant. One group goes to Cyprus and the other heads for Syria. The people grieve. The community heals, and the gospel wins.

Am I missing something here?

Have you ever witnessed a parting of ways like the one described in today’s text? Did they do it well? Things turn out OK?