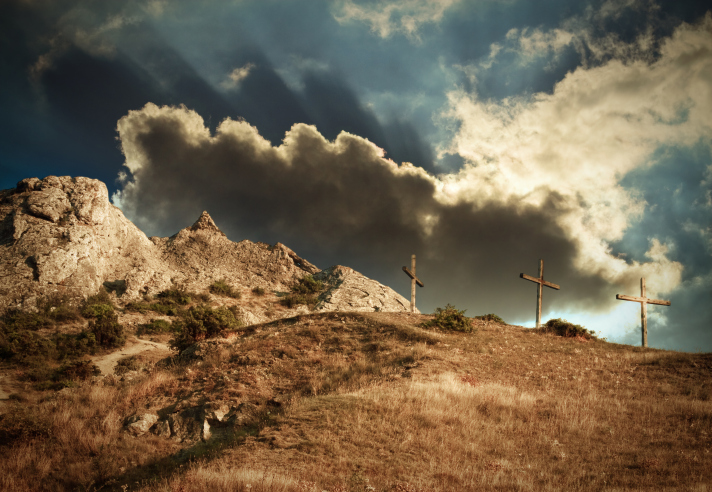 The Paschal Vigil (from Pasch, meaning “the passion”) is the oldest Christian observance in the history of the Church, dating back to the New Testament church.  It is the celebration of the resurrection of Jesus.  The Vigil is the bridge upon which one passes from Lent/Passion Week into the fullness of the resurrection, the climax of God’s story—the Easter season.

The celebration is composed of four movements—the Services of Light, of the Word, of Water, and of the Table.  Historically, the service began at midnight on Easter Sunday and concluded around six in the morning, which then led into Easter morning worship.  However, in the context of the American Protestant church, it is not uncommon for churches to begin the celebration Saturday evening at sunset and conclude two to four hours later.

The Service of Light begins as the congregation gathers outside the church around a blazing fire with unlit candles in hand.  The leader holds the prominent Christ Candle, which is lit by a smaller candle.  From the Christ Candle, all other candles are lit before the community walks into the dark sanctuary.  As they process behind the Christ Candle they sing a continual chorus of Alleluia’s, which symbolizes the light of Christ entering a dark world.  The reading of a beautiful prayer called the Exsultet concludes this movement.

Without skipping a beat, the next movement begins—the Service of the Word.  This is where the congregation encounters the story of God most vividly.  This movement is composed of stories of God’s saving deeds, prayers, and related songs or hymns.  Historically, the church has read anywhere from six to twelve Old Testament Scriptures.  This is by far the longest and most volunteer heavy portion of the Vigil.  The Service of the Word pinnacles as the Resurrection passage (Luke 24) is read.  This movement concludes as the pastor offers a homily centered on the narrative of the resurrection, at which point it is appropriate to celebrate in a loud and boisterous manner through song and dance.

As the songs begin to fade, the Service of Water begins.  This is a great time to baptize new believers in your community (as was practiced in the ancient church) as well as incorporate a “Remember Your Baptism” service for those who have already been baptized.  It is also appropriate to conclude this movement with song as you transition to the Service of the Table.

The final movement of the Paschal Vigil is the celebration of Holy Communion.  Here, you would follow your denomination’s liturgical pattern of Communion.  And again, the Vigil is an “all-out” celebration so you are encouraged to sing and dance once more.  As this final movement resolves, you may send the gathered community home with a Paschal blessing.

Why take the time, energy, person-power to design and execute this ancient service?  It is in the Vigil that we, the people of God, find ourselves dramatically caught up in His story from Creation to the Incarnation and looking forward to the New Creation.  By walking through the breadth of the Old Testament we realize the power and significance of the life, death, and resurrection of Jesus.  And in doing so we are propelled into the hope of Christ’s Second Coming—New Creation!

The Vigil is full of drama that allows each participant to be caught up in the story of God, like no other service in the Christian Calendar.  Story is perhaps one of the best ways to understand the movement of Scripture—God’s story.  From Creation to Christ’s Incarnation we can identify with the lives and experiences of Adam, Eve, Abraham, Sarah, King David, Peter, Mary, just to name a few.  It is within God’s story that we understand who we are in relation to Him and those around us.

Through the Vigil, your community has the opportunity to design worship, which will not only touch the multi-sensory sensibilities of a post-modern culture, but will also be appreciated by a tradition-loving culture, as well.  As worship designers/curators, it is our job to translate and compellingly narrate this ancient, yet living story that is the Gospel of Jesus Christ.  It is our prayer that this resource will guide you as you lead the people in your worshiping community into the beautiful depths of God’s story.

First of all, to understand the nature and order of this ancient Vigil we referred to a number of resources—for the general structure and opening liturgy we used The Book of Common Prayer.  In effort to understand the “why” and “how” of the Vigil we used The New Handbook of the Christian Year, Laurence Stooky’s Calendar: Christ’s Time for the Church, Robert Webber’s Ancient Future Worship and his The Services of the Christian Year; And finally, for the liturgies of the Service of Water and Table we used The United Methodist Hymnal.

We began our service just after dusk on Saturday evening and wrapped up about two hours later.  We incorporated the breadth of our community in the leadership of the service—from elementary school students to grandparents and everyone in between (not to mention five different nationalities).  Therefore, it was more advantageous for us to begin and end relatively early.  The planning stages began some three to four months prior to Easter’s eve.  This gave us ample time to plan out dynamic expressions of Scripture and to schedule participants who would play a role in each of those expressions.  These two elements were without a doubt the most challenging pieces of the preparation process.

The Paschal Vigil, specifically the Service of the Word, captures and dramatically retells the story of God.  As you can see in the supplemental order of worship, both prayer and song accompany each salvific Old Testament story.  However, each story was told using a different medium.  For example, as the Creation piece was read while a group from our community preformed an interpretive dance; a father and his teenage son delivered the story of Abraham and Isaac; for the dry bones passage we produced a video centered in our local cemetery.  These are a few simple expressions of the scriptures we chose to use.  There is a lot of room for creativity in this movement of the Vigil.  Your two-fold task is 1.) To come up with dramatic and dynamic expressions of the Scriptures chosen, and 2.) Those expressions must speak clearly to and be a representation of those within your community—contextualization.

The second challenge was to find people from within our community that could participate in telling God’s story.  It took time to come up with a list of 30+ people who were available and willing to serve using their various gifts.  This, again, is why you are encouraged to begin the planning process early.

Upon the conclusion of the Vigil those who worshiped with us could not say enough about the service.  It captured the attention of young and old while ministering to every person, no matter where they stood in their spiritual journey.

We encourage you to take time to do further research on the Paschal Vigil through the resources recommended above.  The Vigil may take on many incarnations depending on your community and tradition.  And again, our prayer that, through this resource, you are empowered to design a beautiful and powerful service, which catapults your community into a joyous Easter season!

Download a PDF version of Paschal Vigil Order of Worship