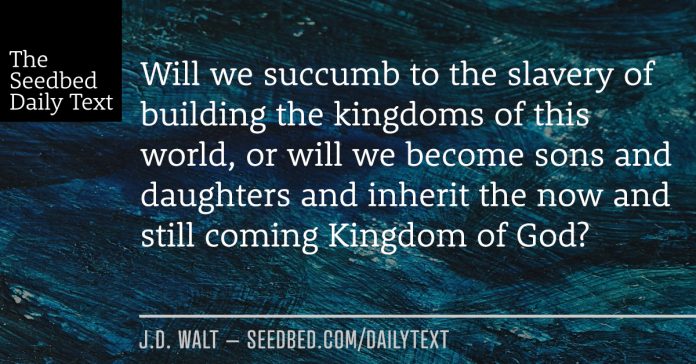 When the king of Egypt was told that the people had fled, Pharaoh and his officials changed their minds about them and said, “What have we done? We have let the Israelites go and have lost their services!” 6 So he had his chariot made ready and took his army with him. 7 He took six hundred of the best chariots, along with all the other chariots of Egypt, with officers over all of them. 8 The Lord hardened the heart of Pharaoh king of Egypt, so that he pursued the Israelites, who were marching out boldly. 9 The Egyptians—all Pharaoh’s horses and chariots, horsemen and troops—pursued the Israelites and overtook them as they camped by the sea near Pi Hahiroth, opposite Baal Zephon.

Pharaoh had one priority: building his kingdom. The God of Israel also had one priority: building his Kingdom. Pharaoh was looking for slaves. God wanted sons and daughters. This is the perennial battle. Every soul hangs in the balance: slave or son/daughter. Will we succumb to the slavery of building the kingdoms of this world, or will we become sons and daughters and inherit the now and still coming Kingdom of God?

Pharaoh represents to us the powers of darkness, and darkness will not release its slaves without a fierce battle. The text is careful to tell us Pharaoh sent six hundred of the best chariots along with all the other chariots of Egypt. He sent the entire army with many officers, troops, horses and riders. Finally, Pharaoh rode into battle himself in his own chariot. This is an extraordinary response and extremely lethal. This is the power of darkness.

Divine deliverance is a complex process and it can take a protracted period of time. The main reason for this is the preference of God to deploy human agents in the process of Divine deliverance. Look at the long game strategy of deliverance in this instance. It began in the midst of a period of intense darkness in Egypt—the lawful murder of all the Israelite baby boys in the country. God began with a pair of courageous parents who made a way for their baby boy to escape death. God used the household of Pharaoh to save this child who would grow up to become Pharaohs nemesis. This son would grow up witnessing the cruelty of Pharaoh as an oppressor of God’s people. Moses grew up with the power paradigm of Pharaoh, leading him to commit murder to defeat a murderer. Moses needed deliverance. At age 40 God took Moses out of Egypt and over the next 40 years he took Egypt out of Moses. Are you watching the timeline here? It took 80 years for this plan to come to launch.

After launch and the unforeseen “Bricks without Straw” program, Moses had a near mutiny on his hands. It took many meetings with repeated requests and 10 catastrophic plagues to bring Pharaoh to his knees. This whole matter of Divine Deliverance was extremely complex, profoundly chaotic and maddeningly unpredictable at every juncture. Despite all of this, God was in complete control, every step of the way.

As we observed yesterday, God delivered the Israelites from Egypt in one night. The deliverance is hardly over. Though Pharaoh was brought to his knees, he quickly got back up. It must have seemed to everyone on the field he would have things back in hand overnight. God had other plans.

I labor to make this point for two reasons. First, we need to read far more deeply into these ancient stories of our faith because they hold deep wisdom and insight and much deeper faith for the sake of the second reason. Now to the second reason. We need to understand the sophisticated complexities of the kingdom of darkness in our own time in our own lives, families and communities, our utter inability and incompetence to combat it on our own with our own resources, and the incredible, unstoppable power of God over darkness for us who believe. We are living in an age where we desperately need Divine Deliverance; not just from this pressing yet passing pandemic but from the deep, deep infestation of compounded darkness in every aspect of the world around us. It will take a Great Awakening. Hence, we sow.

It strikes me today to invite the Apostle Paul to say our closing prayer today.

I pray that the eyes of your heart may be enlightened in order that you may know the hope to which he has called you, the riches of his glorious inheritance in his holy people, 19 and his incomparably great power for us who believe. That power is the same as the mighty strength 20 he exerted when he raised Christ from the dead and seated him at his right hand in the heavenly realms, 21 far above all rule and authority, power and dominion, and every name that is invoked, not only in the present age but also in the one to come. (Ephesians 1:18-21) IN JESUS NAME, AMEN.

On a scale of 1 to 10, 10 being highest, where do you rate your knowledge, understanding, and experience of the ministry of Divine Deliverance?